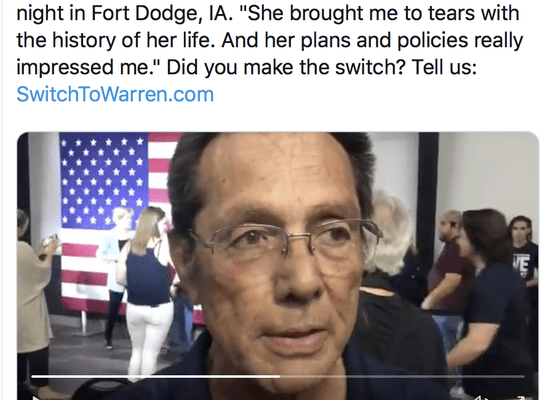 Here are 5 facts to know about Elizabeth Warren. If you want to know if she can win, why Warren over Bernie, why she energizes our base and swing voters…check it out. And please pass it on.

If you support Warren, this is the weekend to make calls to Iowans and donate to fuel Warren's grassroots juggernaut.

2) Warren's breakout moment was the She The People forum. She was the only candidate to get a standing ovation.

Every other candidate was asked, “Why are you the best candidate for women of color?” By the time Warren gave several answers, the moderators said they were skipping that question because they already knew why! See why here:

The Des Moines Register endorsement called Warren “the best leader for these times.” They pointed out, “She was a registered Republican” with roots in Oklahoma and Texas until she saw Republicans siding with big corporations against regular people. “She wants fair markets, with rules and accountability. She wants a government that works for people, not one corrupted by cash.”

On the issues, they said, “Warren doesn’t measure the health of [Trump's] economy by looking at the stock market or an unemployment rate that doesn’t count the longtime jobless or chronically underemployed. She measures it by how working families are doing. Many are not doing well, and Warren seeks major reforms to help them…She believes access to health care is a human right. She would make climate change a top priority…She says corporations should have less Washington influence, children should be protected from gun violence, child care should be affordable, immigrants deserve compassion, mass incarceration should end and the wealthy should pay more in taxes. Those ideas are not radical. They are right. They would improve life in America.”

4) Voters who want to PASS a progressive agenda support Warren. She is the most effective.

Elizabeth Warren came to Washington with one top agenda item. She was told it could never be done. She won!

Warren passed the Consumer Financial Protection Bureau into law. The strongest part of Wall Street reform after the financial collapse, the CFPB “looks out for little guys swindled by lenders and credit card companies,” says the Des Moines Register.

She led the modern fight to expand Social Security benefits in 2013 — which took cuts off the table, something others tried to do for years. In 2015, she convinced conservative Senator Joe Manchin to co-sponsor legislation with her. She got a vote, and Senate Democrats favoring her position jumped from 8 to 42 literally over night! Support has since grown and is now the mainstream.

When bold progressive Susheela Jayapal endorsed Warren, she said, “My choice has been between Bernie Sanders and Elizabeth Warren. I voted for Bernie in 2016, and continue to admire and appreciate his fierce advocacy. In 2020, I’m with Warren. We need bold policy and advocacy — and we also need a president who can actually govern. A president who understands and can operate the levers of influence. A president with the skills and temperament to push, to pull, to exercise power and to build power around her. Elizabeth Warren is that president.

5) Warren is most electable. She excites the base — and when Republicans and Independents hear her, they love her.

Click here to see an Iowan who voted for Nixon, Reagan, Bush, Bush, McCain, Romney, and Gary Johnson who will vote Democrat for president for the first time ever — for Elizabeth Warren:

If you support Warren, this is the weekend to make calls to Iowans and donate to fuel Warren's grassroots juggernaut.

(If you're undecided or support others, please tell us here.)

Click here to donate to keep the ads going.

(51660)
$17.62 (as of May 21, 2022 23:52 GMT -04:00 - More infoProduct prices and availability are accurate as of the date/time indicated and are subject to change. Any price and availability information displayed on [relevant Amazon Site(s), as applicable] at the time of purchase will apply to the purchase of this product.)