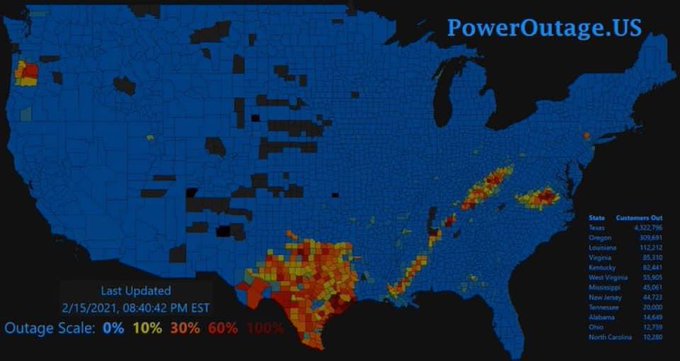 Greg Abbott searches for #TexasBlackoout blame in the state’s power utility but Texas deregulated its grid to avoid the very regulations that would have prevented this problem.  All in the name of profit. Greg Abbott now even blames the Green New Deal.

When it gets really cold, it can be hard to produce electricity, as customers in Texas and neighboring states are finding out. But it’s not impossible. Operators in Alaska, Canada, Maine, Norway and Siberia do it all the time.

What has sent Texas reeling is not an engineering problem, nor is it the frozen wind turbines blamed by prominent Republicans. It is a financial structure for power generation that offers no incentives to power plant operators to prepare for winter. In the name of deregulation and free markets, critics say, Texas has created an electric grid that puts an emphasis on cheap prices over reliable service.

It’s a “Wild West market design based only on short-run prices,” said a portfolio manager, Matt Breidert, at an analytical firm called EcoFin/Tortoise.

And yet the temporary train wreck of that market Monday and Tuesday has seen the wholesale price of electricity in Houston go from $22 a megawatt-hour to about $9,000, while 4 million Texans have been without power.
The widespread failure in Texas and to a lesser extent Oklahoma in the face of a winter cold snap shines a light on what some see as the derelict state of America’s power infrastructure, a reflection of the chaos that struck California last summer.

Texas hates the federal government so much it has its own outdated power grid. No other state in the country has been quite this stubborn, stupid and self-destructive about energy policy. This crisis is brought to you by deregulation. pic.twitter.com/ybeYzd73V8

You can always count on @GregAbbott_TX to pass the buck when he fails. pic.twitter.com/HwPSnzJr75

It's looking like power plants in Texas unplugged to avoid skyrocketing natural gas spot market rates that went to hundreds of $$ to avoid losses. @ERCOT_ISO has now passed an emergency order allowing them to charge consumers those spot market prices. Capitalism at its finest. pic.twitter.com/xxaHsSbgCX

#RedPillSupporter Greg Abbott, other top #Texas officials call for resignations and investigations at electrical grid operator due to #Snowmageddon2021 https://t.co/ILbKmiVPV4

Ah yes, the VISIBLE hand of the marketplace.

Here is how one Texan is protecting his outdoor faucet from the cold winter weather.

Sorry but this is utterly psychotic. There’s an emergency in Texas *right now* and he’s dunking on the Green New Deal with complete lies about the source of the problem. https://t.co/PNzzr6juAR

While we're dunking on Greg Abbott, let's not forget that he fell for the "Jade Helm" op, which emboldened Russia to up its active measures in the US.https://t.co/BfrbMnFpuI

President Biden issued an Emergency Declaration for a state that didn't vote for him. He didn't make anyone grovel. He didn't blame. He didn't insinuate that any of it is their fault. No self-aggrandizement. No obnoxious adjective-laden half-sentences. He just got it done, fast.

"Willingness to exploit my anger and ignorance is a must. Ideally, you’d also be able to host, because I live in my mom’s basement."https://t.co/n5pG9KPyzD

This is at least the second time I've heard @JohnFetterman use the phrase 'Trump Simp' in a live MSNBC interview. He's gonna roll the Rs in '22. pic.twitter.com/kdDGwpm6Bq

Former President Donald Trump issued a caustic and highly personal statement against Senate Minority Leader Mitch McConnell on Tuesday, effectively declaring war on the Kentucky Republican for failing to back his attempts to undermine the 2020 election.

“Mitch is a dour, sullen, and unsmiling political hack, and if Republican Senators are going to stay with him, they will not win again,” Trump said in the statement released by his PAC.

McConnell publicly soured on the former president after the Jan. 6 attack on the Capitol, breaking four years of support from the Senate leadership. Though he voted against convicting Trump at the Senate impeachment trial, he said from the Senate floor that Trump was “practically and morally responsible” for the insurrection, which left at least five people dead.

McConnell objected to the constitutionality of convicting a former president. But he also told his caucus that Trump could face criminal prosecution.

McConnellpenned a Sunday op-ed in The Wall Street Journal defending his decision, which particularly angered Trump, according to a person familiar with the situation. Trump dictated the Tuesday statement himself, the person said, and the version that went out was toned down from the former president’s original comments. Another source familiar with the situation said Jason Miller, a top Trump adviser, took the lead in writing the final version of the statement.

A person familiar with the crafting of the statement confirmed that it could have been far worse. An earlier draft mocked McConnell for having multiple chins, the person said. But Trump was convinced by advisers to take it out.

“There was also a lot of repetitive stuff and definitely something about him having too many chins but not enough smarts,” the person said.

Miller later told POLITICO he felt the statement could have been tougher but denied ever considering an attack on McConnell‘s appearance.

(43212)
$0.00 (as of May 21, 2022 00:40 GMT -04:00 - More infoProduct prices and availability are accurate as of the date/time indicated and are subject to change. Any price and availability information displayed on [relevant Amazon Site(s), as applicable] at the time of purchase will apply to the purchase of this product.)