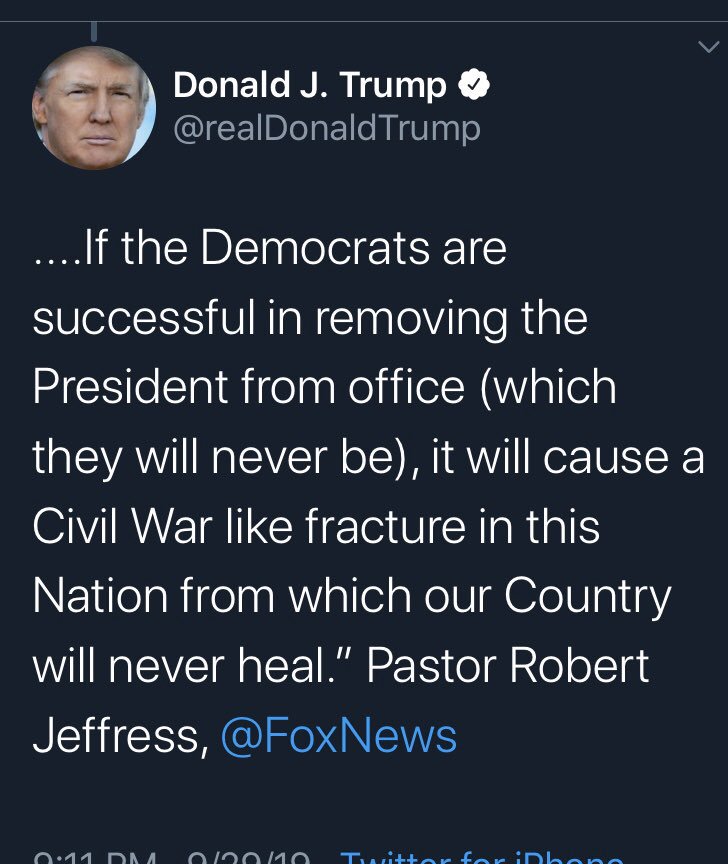 Ron Johnson didn’t see an ‘armed insurrection’ because who could have foreseen that Trump would threaten violence. In August 2016, Trump called for “second amendment solutions” if Hillary Clinton was elected.

Now is the time for 14th Amendment solutions.

By @cgdeaton: Block Trump from office with the 14th Amendment's aiding an insurrection exclusion https://t.co/qHt9TUR6fz via @usatoday @usatodayopinion

If Congress lacked accountability mechanisms other than impeachment or censure, it’d be one thing. But it’s not wanting for options.

One of them is enforcement of Section Three of the 14th Amendment, which states that no state or federal office holder “who, having previously taken an oath … to support the Constitution of the United States, shall have engaged in insurrection or rebellion against the same, or given aid or comfort to the enemies thereof.”

In other words: No second chance to place your hand on the Bible and repeat after the judge if you were an insurrectionist the first go-round. This novel idea was floated by Sens. Susan Collins, R-Maine, and Tim Kaine, D-Va. It merits widespread consideration now, given how it meshes with the emerging Republican position on Trump’s culpability for Jan. 6 and Congress’ capability for responding to it.

First, is there a procedural problem? No. Forty-four Senate Republicans voted that Trump’s most recent impeachment trial was unconstitutional, but a Section Three vote is entirely different. There is no constitutional roadblock to taking up congressional enforcement of a constitutional provision itself.

Second, is the idea constitutionally unassailable? Yes. Section Three, about aiding an insurrection, relates to a judgment of Congress, not a criminal court. The House and Senate could pass a resolution that states the facts about Trump’s conduct leading up to and on Jan. 6, for example, and concludes that Section Three disqualifies him from holding office in the future.

Trump is not a cable package

And finally, is this politically feasible? It is. Congress already voted on language to bar Trump from future office. Such a section was included in the House’s impeachment article.

If you missed it this weekend, Sen. Ron Johnson (R-WI) said this about the 1/6 Capitol Insurrection:

“This didn't seem like an armed insurrection to me. I mean, armed — when you think hear armed, don't you think of firearms?” pic.twitter.com/pZuJnpeKzg

“We have contained (COVID). I won’t say [it’s] airtight, but it’s pretty close to airtight.”

Watch Larry Kudlow praise Pres. Trump’s COVID response in the past tense — as if the global pandemic ended and over 50 million Americans haven’t filed for unemployed #RNC2020 pic.twitter.com/7pkdQnB84K

Here it is, around 3:47, Trump is invoking the “Second Amendment Rights” dog whistle at this Rose Garden remarks about the George Floyd protests: pic.twitter.com/4gRPTnxXR0

When is the right time to start talking about “Second Amendment” solutions?

What? I'm not the one who suggested it. https://t.co/wYejEVMRzT

Trump told Christian leaders that if the GOP loses, “they will overturn everything that we've done and they'll do it quickly and violently, and violently. There's violence. When you look at Antifa and you look … these groups — these are violent people.” https://t.co/JAvYYlkMk8

Trump’s history of suborning violence…and then betraying those who believed him. https://t.co/dxZfZLKghO

This is ridiculous revisionist history. Police stopped only a fraction of the violent mob on Jan. 6, but we still know guns, explosives, knives and all manner of makeshift weapons were present as rioters attacked police and forced entry to the Capitol. https://t.co/CH2wdxUXBF pic.twitter.com/A0g4vY3Rjg

This goes places you won't expect. Really affecting look at America's descent into…into whatever unholy thing it is we're descending into. https://t.co/5msWZUnCFB

Yesterday they crushed the First Amendment.

You can see what’s coming next.

I vow to do everything I can to protect American’s Second Amendment rights.

Without our #2A, all other rights are defenseless.