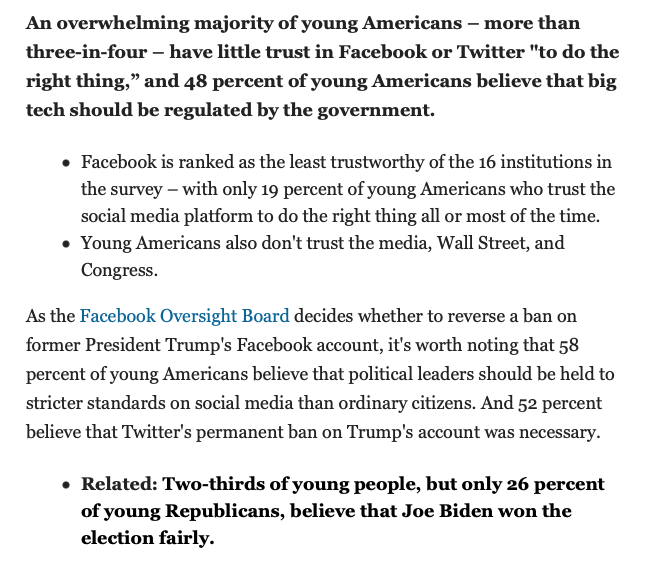 Previous guy always expects the loyalty of mob silence Omertà, even when he throws everyone under the bus, it’s part of his personality disorder. The real goal for his relative silence might be the return to social media when Facebook reconsiders their suspension. He has a Parler account but doesn’t use it, and he could easily try to be on Twitch or Telegram, but perhaps that’s for when the Feds or NY state get closer to prosecution.

Why it matters: The decision will set a historic precedent for how the tech giant treats accounts of world leaders, and could be a litmus test for the board’s power.

Details: “I'm less concerned about the fate of Donald Trump as much as I am about the precedent that this is setting for the removal and de-platforming of everyone else,” Rep. Ro Khanna (D-Calif.) told Axios.

Trump’s Facebook account is now a time capsule of the final, chaotic days before his presidency ended.

This is one of those stories so good that I'm jealous I didn't think of it.

Trump may still eventually return to the page: After enacting the initial ban, Facebook gave its independent Oversight Board the task of deciding whether he’ll ever be allowed back.

But that decision hasn’t been made yet, and until it is, Trump’s page is effectively open to everyone in the world except Trump himself (along with Trump ally Roger Stone and others who have received permanent bans). So now, in lieu of new posts to argue over, the legions of #MAGA conservatives and #Resistance liberals that once duked it out in the comments below each presidential update are stuck piling in under that last Jan. 6 post.

“For those die-hard Trump fans and supporters, this site can represent a location for a parasocial relationship … [or] a one-sided relationship,” said Natalie Pennington, an assistant professor of communication studies at the University of Nevada, Las Vegas. “These people feel like they’re close to Trump even though they don’t know him, which is why you see them commenting in a way that is directed at him, as if he is the one that is reading and writing and responding — even though he’s obviously not responding, since he’s banned.”

Pennington’s research has explored how people engage with the Facebook accounts of their dead friends and family members. She noted parallels between that grief and what Trump’s most persistent Facebook fans express: “We don’t always have the closure we want, or we have feelings that remain over time.… For people who were upset that Trump lost the election, those feelings aren’t just going to go away four months later. And so the page becomes a place for them to continue those conversations amongst each other.”

That behavior, she said, is an extension of older, pre-internet forms of coping: visiting a gravesite, for instance, or attending a funeral.

But for others, commenting on a months-old post from a banned former president is a pale imitation of the direct line of communication with Trump that they used to have and want back.

Facebook’s “Supreme Court” to soon announce Trump decision .. will have a significant impact on Trump’s fundraising ability and political future

Facebook's internal report on its role in Trump's insurrection has now been leaked online: report https://t.co/5t7sZGJe39

“Facebook allowed far-right groups to organize in Facebook groups, despite repeated warnings culminating in an attempted coup when Trump’s supporters stormed the US Capitol with the mission of taking elected representatives hostage and overthrowing the gov.”

Facebook let Trump lie America into an insurrection. Will it stop other leaders from doing worse? https://t.co/MTkmAtQKvc

“Trump is now underground. This is similar to the early 1990s when he went bankrupt multiple times and his elite criminal friends were getting arrested. He laid low like a good mafioso does, and that's what he's doing today.” — @gaslitnation https://t.co/NLiuovfPHW

Barred from Twitter and Facebook as Trump was, social media’s younger conspiracy theorists are moving to Twitch.https://t.co/bADn7Cs6FV

*CBS News Poll of Speech Watchers*
We interviewed watchers immediately after the speech.

More than eight in 10 of those who watched approve of Biden’s speech.

Most said it made them feel optimistic about America. pic.twitter.com/QOkI0PoVuo

Comedians don’t need an instruction manual for mocking the eminently mockable Biden; they just need an occasion. While the fall seen ’round the world definitely presented them with one, it also highlighted why that opportunity didn’t drag on for very long, as critics such as Donald Trump allege it would have, had the fall happened to, say, Donald Trump.

In an outraged post about the media hypocritically making too big a deal about Trump’s ambling walk down a ramp last year, Fox News neglected to include how Trump himself exacerbated the incident by tweeting this: “The ramp that I descended after my West Point Commencement speech was very long & steep, had no handrail and, most importantly, was very slippery. The last thing I was going to do is ‘fall’ for the Fake News to have fun with. Final ten feet I ran down to level ground. Momentum!”

Biden apparently never felt the need to defend his precious vanity after a plurality of Americans witnessed him bust ass on that staircase over and over again, like Sideshow Bob stepping on rakes. Either he knew that doing so would only further protract the story, or he was more concerned with passing a massive infrastructure bill. The result is the same either way.

In one fell swoop—emphasis on fell—Biden managed to further establish a contrast with his predecessor, show some humility, give comedians joke-ammunition for days, and chip away at the myth of media favoritism.

I know Democrats get punched when they don’t take the high road, but honestly Ds should take every opportunity to remind the country that Trump first put his idiot son-in-law in charge of responding to the pandemic, then just gave up and let over 400k die. https://t.co/oPZZEscr8v