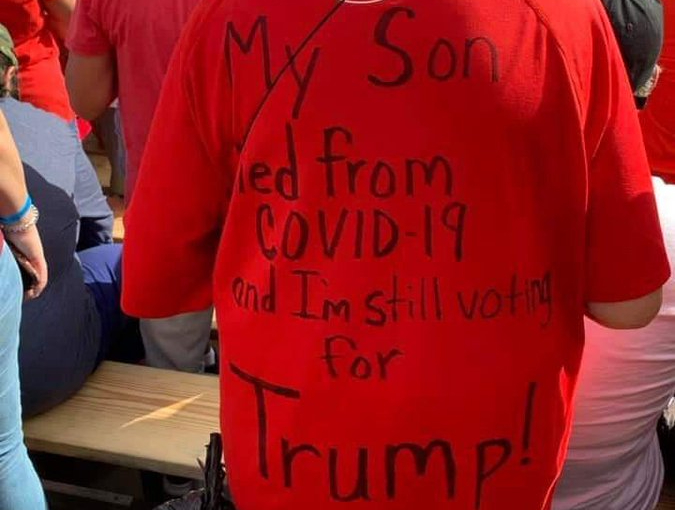 Charlie McCarthy’s cousin, Kevin claimed POTUS Biden’s speech could have been an email, as previous guy claimed paternity for vaccine development that wasn’t even his. Remember when Trump and Kushner declared 60,000 American deaths to COVID-19 “a great success story”.

.@GOPLeader: “Republicans will work with anyone to build America up…” 🤡 pic.twitter.com/tw2RHJ6gbV

Former President Donald Trump appeared on Fox Business Thursday morning to discuss President Joe Biden’s first address of a joint session of Congress, and largely spoke about himself and took credit for the speed in which vaccines for Covid-19 were developed.

Maria Bartiromo asked her guest about the FDA’s decision to pause the Johnson & Johnson vaccine after very rare instances of blood clotting raised concerns, which Trump dismissed as a “stupid thing to do.”

Trump then pivoted to the set of American citizens who are hesitant to get the vaccine, which polls suggest, is largely comprised of his own base of supporters.  “There’s a big situation with a lot of people don’t want to take the vaccine,” he said, before blaming the J&J vaccine pause for adding to skepticism among those who aren’t eager to get vaccinated.

“This played right into their hands and they want me to do public service messages and everything about everybody taking the vaccine,” he said. “And look, I guess in a certain way I’m the father of the vaccine because I was the one that pushed it. To get it done in less than nine months was a miracle.”

Reports surfaced earlier this month that the 45th president and the former First Lady Melania Trump received vaccinations in January, but did so in private. Many have suggested that had they publicly announced that they were vaccinated, or did it during a press opportunity, then many of his supporters would be more likely to get vaccination themselves.

Trump Declares Himself 'Father of the Vaccine' as He Rips Johnson & Johnson Pause: 'Stupid Thing to Do' https://t.co/KtetyKmLam

Anyone who helped Trump become president shares responsibility for these deaths. https://t.co/nvt8N5JcIt

“A new study by an UCLA economist estimates that 400,000 people in this country died of Covid who could have been saved if Donald Trump and the Republican Party had implemented a more effective health strategy,” says Chris Hayes. “400,000 people who are dead who did not have to be.”

Keep in mind, Trump inherited a great economy. Biden, on the other hand, entered office in the midst of a raging pandemic, with 500k deaths, 400k of which were due to Trump's malevolent incompetence. Funny how the press underplays that…

One year ago, the cumulative number of US cases surpassed 1 million and the death toll exceeded the number of American deaths in the Vietnam War.

The same day, when asked what will happen if states reopen before there’s a coronavirus vaccine, Trump says, “It’s going to go away.” pic.twitter.com/HX3dTgvmvW

[…] said, I’m not sure what Rogan was tripping on when he offered his nonexistent expertise on vaccines and who should be getting […]