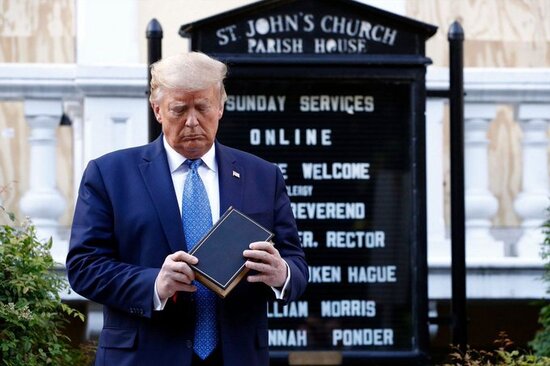 The real question is whether Republicans are really the “unnerved who have long enabled him but now fear losing power and forever associating their party with his racial animus.”

Leaning on a culture war requires the power of a reactionary populism that can keep intimidating and oppressing people on the basis of race, class, and gender in the face of more “woke” individuals. The thing is, democracy is more than wearing black or trying to not wear black by wearing flowered shirts.

BREAKING NEWS: A mob in Boston has torn down two statues from the Old State House and set them on fire.

This occurred on July 18, 1776, upon the first public proclamation of the Declaration of Independence in Massachusetts.

It's as American as apple pie.

Trump put his strategy to resuscitate his troubled reelection campaign by galvanizing white supporters on display Friday night under the chiseled granite gaze of four past presidents memorialized in the Black Hills of South Dakota. He celebrated Independence Day with a dystopian speech in which he excoriated racial justice protesters as “evil” representatives of a “new far-left fascism” whose ultimate goal is “the end of America.”
“Our nation is witnessing a merciless campaign to wipe out our history, defame our heroes, erase our values, and indoctrinate our children,” Trump said to boos from a packed crowd of supporters. “Angry mobs are trying to tear down statues of our founders, deface our most sacred memorials, and unleash a wave of violent crime in our cities.”

Over the years, some Republicans have struggled to navigate Trump’s race baiting and, at times, outright racism, while others have rallied behind him. Bursts of indignation and frustration come and go but have never resulted in a complete GOP break with the president. Trump’s recent moves are again putting Republican officeholders onto risky political terrain.

A remarkable straight news wapo piece that doesn't beat around the bush: Trump is running on racism. This would not have been written four years ago even though the strands are the same. Which is why I do believe the media has evolved in important ways https://t.co/Yw4mwyt8qp

Deaths, Deaths, Deaths! You show minimal concern for those killed by the pandemic, and you refuse to encourage basic steps that could reduce the deaths of additional Americans. YouÃ¢Â€Â™re #PuttingStatuesFirst. https://t.co/lmnDtmQKnM

Trump is out here straight up delivering a campaign speech during what is supposed to be a non-campaign event pic.twitter.com/Zfk1OTVbTb

“They coddled this guy the whole time and now it’s like some rats are jumping off of the sinking ship. It’s just a little late,” John Kasich said. “It’s left this nation with a crescendo of hate not only between politicians but between citizens. . . . It started with Charlottesville and people remained silent then, and we find ourselves in this position now.”

“Without white resentment, there is no rationale for Donald Trump,”

TRUMP SUPPORTER 1: “There is a large group of people with guns walking through the streets of town.”

TRUMP SUPPORTER 2: “That is their Second Amendment right.”