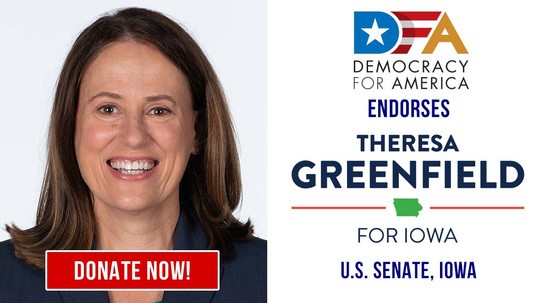 For the first time in decades, Iowa’s Senate race is competitive.

We have the opportunity to replace Republican Senator Joni Ernst with someone who knows the struggle of Iowans and will give it her all to fight for them in the Senate. That someone is Democrat Theresa Greenfield.

Theresa outraised Ernst the last two quarters, has over $2 million in the bank and is building a campaign that — with our help — won’t just win the Senate seat, will also flip the state against Trump in November.

While Ernst made big promises to take on the corporate lobbyists in Washington, in reality she’s supported Trump every step of the way. And when Trump and Mitch McConnell gave tax breaks and loopholes to Wall Street, the insurance and drug companies, and the wealthiest few, Senator Ernst was a reliable vote every time.

Theresa’s a proud “farm kid” who grew up working hard on her small family farm while maintaining other part-time jobs just to get by. She knows firsthand the real needs of everyday Iowans, farmers and families. She knows Iowa doesn’t need more corporate giveaways and she’ll fight for investments in public education, small businesses, and healthcare.

DFA is proudly backing Theresa in this race to win Iowa and Flip the Senate: will you help us keep up the momentum and build the campaign by pitching in $5 or more today?

Thank you for everything you’re doing to flip the Senate this November,