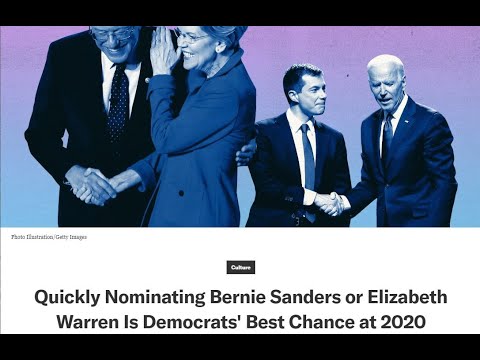 Indigenous Pirate Radio’s Breakdancing with the Wolves podcast’s Gyasi Ross appeared on AM Joy on MSNBC. He had a prescient message for Democrats. Joy-Ann Reid referred to Adam Jentleson’s article about Democrats nominating either Bernie Sanders or Elizabeth Warren quickly. Gyasi Ross agreed but wanted to enhance the message to the Democratic Party.

“The progressives are bringing the energy. They are bringing the funk. They are bringing the flavor whether you are talking about Elizabeth Warren, whether you are talking about Bernie Sanders,” said Ross. “Again, I want to get back to the message that people of color absolutely will turn out with enthusiasm, with clapping their hands and breaking to move and action if the Democrats deliver the goods. We saw that in 2008. We saw that in 2012. … We need a candidate that elicits excitement, that elicits something more.”

Ross went on to say that some people on his Twitter feed say beating Trump is excitement enough. He shot that down.

“No,” Ross said pointedly. “We actually need vision. … We need somebody who can see where we are going not just to repudiate where we’ve been.”

Watch the portion of the segment below with some commentary.

Why Bernie Sanders or Elizabeth Warren the best choices

Democratic voters want to know how this all ends. They’re fixated on electability, which is notoriously hard to gauge. You have to guess what other people will think several months in the future, with no idea what will happen in between. Prioritizing electability in presidential elections led Democrats to nominate John Kerry, while ignoring it led them to nominate Barack Obama. “Voters are not very good at predicting electability,” summed up pollster Patrick Murray. But despite this obsession, Democrats are whistling past one enormous threat to the electability of the Democratic nominee: a long and divisive primary.

Giving your opponent a big head start, during which he can spend his effectively unlimited sums of money while wielding the power of incumbency and the bully pulpit of the presidency, is bad for electability. Trump doesn’t need to know who his opponent is to start running ads promoting himself and building the grassroots infrastructure he needs in swing states.

Jentleson goes on to point out why Democratic victory goes through the progressive direction.

But while the moderates are selling themselves as the safe choices, they’re far more likely than the progressives to lead Democrats down the risky road of a long, divisive primary. This isn’t 1996—we’re not dancing the Macarena at the convention and the moderates aren’t the unity candidates—the progressives are. The party has shifted leftward, with self-identified liberals making up the largest share of the party in seventeen years. All the energy, enthusiasm, and grassroots support lies with the progressives, who can raise ungodly sums of money without attending a single fundraiser. To borrow Chris Rock’s analysis, they are the “of the moment” candidates, not the “it’s my turn” ones—and the of the moment candidates win. The sooner Democrats realize that, the faster they can unify the party and turn their attention to beating Donald Trump.

Jentleson then attempts to dispel the electability trap.

There’s so little reliable data on electability because the sample size is ridiculously small: there have only been 24 presidential elections since the advent of modern polling. One of the most-often cited pieces of research on presidential electability is a study of House races—which is circular, because over the last decade or so, the outcome of Congressional races have come to depend almost entirely on the outcome of presidential races. We are largely flying blind—we should check the instruments, but Biden, Warren, and Sanders all beat Trump consistently, both in national polls and in the Real Clear Politics averages of Michigan, Wisconsin, and Pennsylvania. And one thing we can know beyond a shadow of a doubt is that a long primary where Democrats spend their finite resources like time and money attacking each other, instead of Trump, while Trump spends his unlimited money attacking them, is bad.

In a crowded field, Democratic voters have options, but they may not be the ones they think they have. At the end of the day, there may only be three choices: Warren, Sanders, or a long and divisive primary. Let’s choose wisely.

It is clear, that if Democrats want a big, it does not go through Biden, Buttigieg, or Klobuchar. Insanity is doing the same thing over and over again and expecting a different result. Let’s hope the rank & file wake up as the Establishment will not. They cannot.

(28)
(as of May 19, 2022 09:14 GMT -04:00 - More infoProduct prices and availability are accurate as of the date/time indicated and are subject to change. Any price and availability information displayed on [relevant Amazon Site(s), as applicable] at the time of purchase will apply to the purchase of this product.)