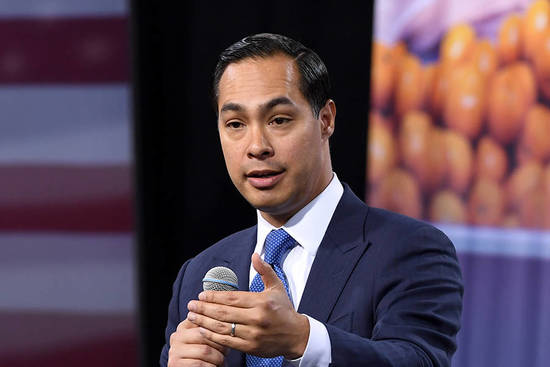 My grandmother came to San Antonio as a seven-year-old orphan from Mexico almost 100 years ago. I was born and raised here. It’s where I served on the city council and as Mayor and it’s where I’m proud to call home.

I know this community, and I know that it deserves leaders who will put the people who live here first, above all else.

Jessica is a fearless and progressive leader who will fight for the people of South Texas. She’ll stand up for immigrants, for hardworking families, and for those who need a voice in Washington.

That’s why I’m proud to endorse Jessica Cisneros to represent South Texas in Congress and I'm asking you to join me in supporting her campaign.

Can you make a donation to her campaign today? The election is just a couple weeks away, and more than ever, Jessica needs our grassroots support >>

She will help us build an America where everyone is seen and everyone counts. She’ll push back on Donald Trump’s cruel and inhumane immigration policies. She will work tirelessly every single day so that South Texas families can get better health care, good paying jobs, and an affordable education.

Washington only works if the people that we elect stand up for the communities that sent them there. Jessica will do just that.

Jessica embodies the American Dream. She’s the daughter of Mexican immigrants who became a human rights lawyer. She understands the challenges the people of Texas and this country are facing because she’s lived them herself.

I know she will make us proud in Congress. So I’m asking you to help her get across the finish line before her primary on March 3:

Jessica’s campaign is powered by people like you. Pitch in $5, $10, or $20 to help get her across the finish line. Every cent of your contribution will go directly to her campaign.

Thank you for joining Jessica in this fight. I cannot wait to call her our congresswoman.

Together, we will win!

The next one is from Rep. Alexandria Ocasio-Cortez (D. NY-14) on behalf of MoveOn.org:

This is Representative Alexandria Ocasio-Cortez, and I'm writing to you today because I want to tell you about a powerful, progressive fighter who can shatter my record of being the youngest woman to serve in Congress. Her name is Jessica Cisneros, and her win would get us one step closer to a better, more just America. But, Sam, she needs your help.

Jessica is running to represent the people of South Texas. She's 26 years old, she's a human rights attorney, and if she's elected, I'll have a strong ally in the fight for Medicare for All, getting corporate money out of politics, and fixing our broken immigration system.

But I can tell you from personal experience that the pathway to power for people like Jessica is blocked every step of the way.

Jessica is running against Representative Henry Cuellar, an eight-term Democratic congressman in a deeply blue district, who votes with Donald Trump about 70% of the time.1 He's known as “Big Oil's favorite Democrat,” boasts about his “A rating” from the National Rifle Association, opposes abortion, and has referred to undocumented immigrants as “rapists and murderers.”2

When we vote Trump's cronies out of office and instead elevate progressive leaders like Jessica Cisneros, we'll have the power to make transformative change.

Will you join me in helping to elect Jessica Cisneros by chipping in $3 now to her campaign?

Jessica is deeply connected to the problems and struggles facing our communities. She was born and raised in the border town of Laredo, TX.3 Her parents are Mexican immigrants. As a kid, Jessica saw families like hers torn apart by a broken immigration system. She saw her parents struggle to keep a small business afloat, while politicians in Washington protected large corporations.

While Jessica is fighting for a better future for all of us, her opponent wants to maintain the status quo. He's the single largest recipient of oil and gas PAC donations in the House in the 2020 election cycle.4 He calls the Green New Deal “a farce and a fairy tale.”5

And he has received piles of money from the private prison industry, including from the GEO Group, the private prison company that funds migrant shelters where several migrants have died.6 In defending private prisons, he said, “Without them, rapists, murderers, and other offenders would not be incarcerated and instead present a clear threat to our communities.”7

The people of South Texas deserve a Democrat like Jessica who is going to fight for the interests of real people, not of big corporate donors like ExxonMobil and the private prison industry.

Will you rush a donation of $3 to Jessica Cisneros's campaign? Her primary is on March 3, so we don't have much time.

I am so grateful to MoveOn members. You were there early to endorse my campaign. You were there at the Women's March. You were there when we stood together to publicize the horrors of family separation. And every day, you're fighting alongside me for Medicare for All, debt-free college, and the Green New Deal.

Only together can we truly make progress on big issues. And that includes bringing more bold, progressive leaders to Washington. Jessica is the next-generation leader that we need, and I hope you will join me in lending your support to this critical effort.

(85828)
$0.00 (as of May 17, 2022 05:35 GMT -04:00 - More infoProduct prices and availability are accurate as of the date/time indicated and are subject to change. Any price and availability information displayed on [relevant Amazon Site(s), as applicable] at the time of purchase will apply to the purchase of this product.)