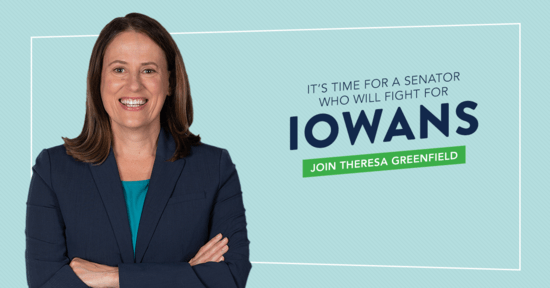 It's clear: we have a real shot at taking back the Senate next year. But we can't do it without winning in Iowa, so I'm reaching out today to let you know why I'm supporting Theresa Greenfield in this crucial race.

I know Theresa is the leader I need fighting beside me in the U.S. Senate. She's someone we can count on to roll up her sleeves, bring people together, and really get things done. But she has a tough fight ahead of her. Millions of dollars are already flooding Iowa, ensuring this will be one of the most expensive races in the country. So we need to help her fight back.

Will you join me in supporting Theresa's campaign for U.S. Senate? Pitch in $5, or whatever you can, right now.

I can't overstate how important it is that we send Theresa to the Senate. My Democratic colleagues and I are doing everything we can to expand access to affordable health care, protect Social Security, and invest in public education. But if we're going to make real progress, we need allies like Theresa to join us in the fight.

We only need to flip four seats to gain back control of the Senate, and we have a great shot in Iowa. But Theresa is up against deep-pocketed, Republican special interest groups, so we need to make sure she has the resources to fight back.

Pitch in right now to join me in supporting Theresa Greenfield and, together, we can flip this seat and the Senate.