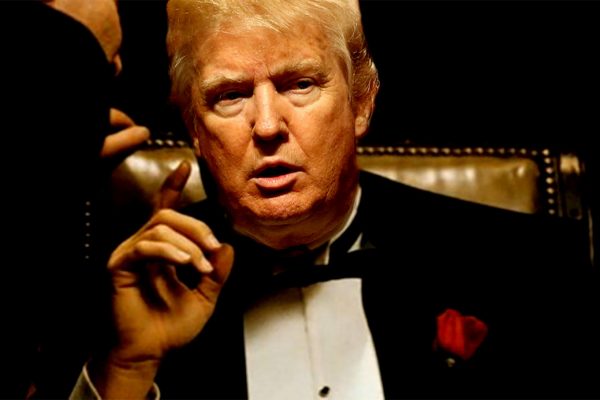 Today’s bombshell had a considerable blast radius.  Sondland affirms, “yes” there was a “quid pro quo.” After a first deposition, a revised addendum, and today another lengthy statement, we now know there are receipts, and if Trump were not a PABOTUS*, he’d be indicted. Lacking that, the articles of impeachment get more substance.

“Everyone was in the loop. It was no secret” – Sondland. https://t.co/yPphlTSbgc

We now see more Amigo triads: from Perry/Volker/Sondland to Bolton/Pompeo/Mulvaney, intersected by Rudy, directed by Trump, because Article III of the Nixon impeachment is about obstruction of justice.

Gordon Sondland just made the scandal already consuming Donald Trump’s presidency a whole lot bigger than it was only 12 hours ago.

And that means Democrats are going to have to rethink what comes next.
In his bombshell testimony, Sondland, the U.S. ambassador to the European Union, implicated numerous members of Trump’s Cabinet in this unfolding story to a far greater degree than before.
The latest updates in the Trump impeachment hearings
In just a few hours, Sondland unleashed a fusillade of revelations that suddenly bring us face to face with much bigger questions about the roles played by acting White House chief of staff Mick Mulvaney, Secretary of State Mike Pompeo and Vice President Pence.
As a bonus, Trump’s lawyer Rudolph W. Giuliani is now far more deeply implicated as well.

Crucial point from Sondland: "I'm not sure how you can call it an 'irregular channel' when you're talking about the President, the Secretary of State, the national security advisory, the Secretary of Energy…" #ImpeachmentHearing

BOOM. That was a big step foward. Sondland confirmed that the only logical conclusion he could conceivably reach was that the military aid was part of the extortion plot.

And Sondland confirmed that Pence didn't object to this notion, either. https://t.co/OdQetmgQPC

Trump is now yelling on TV:
"Sondland said that I told him 'I want nothing.'"

That still doesn't change what Trump directly told Zelinsky he wanted in exchange for arms on his own (edited) transcript:
Trump⁩: “I would like you to do us a favor though.”
Investigation.

SONDLAND: It became very clear to all three of us that if we wanted to move the relationship forward, President Trump was not really interested in engaging. He wanted Rudy to handle it … Secretary Perry took the lead and made the initial contact with Rudy.

THREAD. I’ve read the Sondland Testimony, and boy is it devastating to Trump. Remember, this is the one guy Trump pointed to to exonerate him. Excerpts and quick analysis below.

On this whole question of Sondland saying he was unaware that Burisma had to do w Biden, how does he explain the text exchange w/Amb. Taylor on Sept 9,where Taylor said "As I said on the phone, I think it's crazy to withhold security assistance for help with a political campaign" https://t.co/vfehGrgiUr

Sondland is destroying virtually every Trump defense: Trump didn’t care about Ukraine; there was a quid pro quo; Trump & Rudy demanded the announcement of investigations; everyone was in the loop; Ukraine knew about the linkage; all was directed by Trump

Shows Pompeo in the loop with new evidence

Implicates Trump, testifies this was on his orders

Sondland saying he didn't know about Biden-Burisma connection. So he just thought President Trump was interested in an old, closed, corruption case into a private gas company in Ukraine? And cared so much, that it became a main focus of Ukraine policy?

Darn those codes, red or otherwise.

.@RepSpeier reminds Congress of a key quote from Michael Cohen's testimony: "He doesn’t give you questions, he doesn’t give you orders, he speaks in a code. And I understand the code, because I’ve been around him for a decade." pic.twitter.com/ze4B6vmAuf

I just want to salute the Sondland lawyers who came up with “Did I contradict my earlier testimony? Well I might not have if the WH and DoS hadn’t blocked access to my notes,” that is a next-level flip

HERE'S THE EMAIL Sondland says shows "a lot of senior officials" knew about the quid pro quo for a White House meeting.https://t.co/qifS4iqwPD pic.twitter.com/JnIrCqPT9m

Schiff: But he had to get those 2 investigations if that official act was going to take place, correct?

Sondland: He had to announce the investigations. He didn't actually have to do them as I understood it.

And that's the ballgame– proof that this was NEVER about corruption. pic.twitter.com/jtid2abqvp

Sondland confirms that the Ukraine scheme was a quid pro quo: the conditioning of official acts, a WH meeting and military aid, for something of great value to the president.

It goes right to the heart of the issue of bribery, and other potential high crimes and misdemeanors. pic.twitter.com/FGOiviza85

Trump donor Gordon Sondland has established that the bribery scheme of the Ukranian leader came straight from @realDonaldTrump.

People can still disagree, as a political matter, whether impeachment should occur. But as a factual matter, @POTUS committed impeachable offenses. https://t.co/qmgRWb0vTV

It's unclear why this impeachment inquiry needs to continue

The evidence does not come from the deep state

Unless Sondland takes the Fifth this morning, Pompeo and Trump are likely to look back on November 20, 2019 as the beginning of the endhttps://t.co/8nLpe4wPkc

That didn’t hurt a bit. pic.twitter.com/e8zSJaFyo5

(43373)
(as of May 22, 2022 18:04 GMT -04:00 - More infoProduct prices and availability are accurate as of the date/time indicated and are subject to change. Any price and availability information displayed on [relevant Amazon Site(s), as applicable] at the time of purchase will apply to the purchase of this product.)