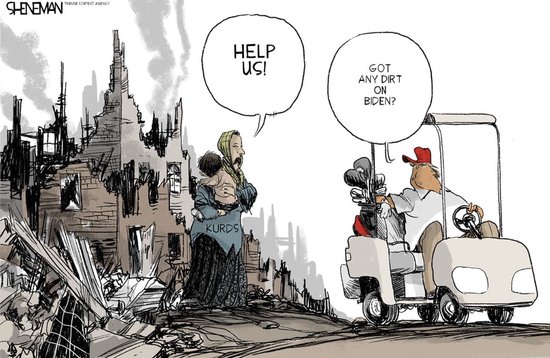 The primary combatants are the SNA, mercenaries supported by Turkey, and the SDF, although it now seems clear how much the absence of US forces has allowed the continuing rather than paused carnage. 300,000 people have been displaced.

And then there’s all that Trumpian disinformation, often repeating Turkish talking points.

Fact check: Cutting through the misinformation on Syria, Turkey and the Kurds https://t.co/tPz1uP7ttQ pic.twitter.com/ZqJjUBssWj

Origin of the conflict

The Kurds and “a different part of Syria”

Trump has at least twice appeared to refer to a 2017 dispute between the Kurds and Iraq as having taken place in a “different part of Syria.”
Facts First: The dispute was over the contested city of Kirkuk, which is in Iraq, not Syria.
Full fact check here.

The day a ceasefire between Turkey and the Kurds was announced, Trump claimed people had tried to make that deal with Turkey for 10 years but were not able to. Then he said it had been 15 years or more.
Facts First: The Syrian Civil War is less than 10 years old, Trump made a narrow deal specifically related to Turkey’s offensive this month, and no previous president had sought to offer Turkey such concessionary terms.
Full fact check here.
www.cnn.com/…

The results of the 11th day of fighting and resistance in Northern Syria#SDF https://t.co/lp3iqKOOtX

Over the last century, the Kurds have endured wars, repression and above all, betrayal https://t.co/hvfctQYM2S

We can't ignore that the president's decision to abandon the Kurds, despite widespread backlash, could have had something to do with the property he owns and profits from in Istanbul https://t.co/qsnQSMW9eQ