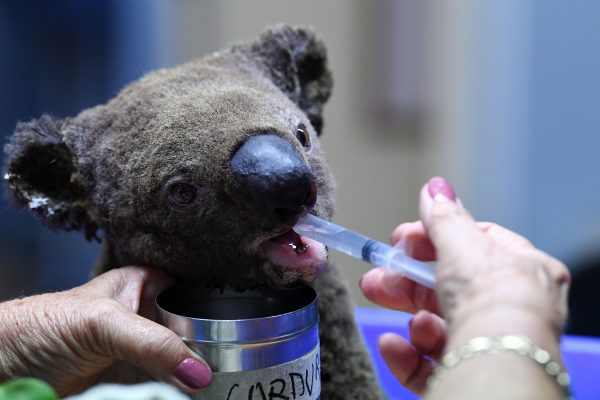 “The anger is real. The anger is justified. Because this disaster was all foreseen and predicted. For decades the link between a hotter, drier climate, land-clearing, excessive irrigation and increased fire risk have all been attested in scientific papers.”  Carol Sparks, Mayor of Glenn Innes Severn Council

My view on Australia burning: that human-caused global warming will lead to heat and wildfire crises in Australia has been abundantly clear for a long time. This IPCC statement is just one example. “Virtually certain” means more than 99% likely in IPCC language. pic.twitter.com/bBpBRlmmVT

Don’t worry, I won’t be sharing photos or videos of wildlife killed by the unprecedented heat and bushfires over the past few months in Australia. They turn my stomach into knots, but we do need to know how these climate change enhanced wildfires are killing wildlife from soil microbes to Koalas. And, it is not just mammals, but insects, reptiles, amphibians, birds and marine life have all been affected.

From the New Zealand Herald:

There are real concerns entire species of plants and animals have been wiped out by bushfires following revelations almost 500 million animals have died since the crisis began.

Ecologists from the University of Sydney now estimate 480 million mammals, birds and reptiles have been lost since September.

That figure is likely to soar following the devastating fires which have ripped through Victoria and the NSW South Coast over the past couple of days, leaving several people dead or unaccounted for, razing scores of homes and leaving thousands stranded,

Harrowing scenes of kangaroos fleeing walls of fire, charred bodies of koalas and cockatoos falling dead out of trees have horrified the world as it tries to take in the scale of the unfolding disaster.

Koalas have been among the hardest hit of Australia’s native animals because they are slow moving and only eat leaves from the eucalyptus tree, which are filled with oil, making them highly flammable.

What a good dog.
Taylor the springer spaniel is busy helping detect and save the lives of koalas and wounded wildlife in bushfire destroyed areas.
“She is trained to prioritise the scent of the live animal and sit as close to it as she can”.https://t.co/kiim0eCcRQ pic.twitter.com/ecipZg3dKU

In 2016, The Conversation wrote a piece on how bushfires are pushing Australian species to the brink of extinction. It is a must read and more relevant then ever given the climate apocalypse of 2019 and 2020. They note that “fire and fire suppression” is a threat to over 100 species.

Exxon Mobil Australia had the audacity to send out this tweet, while the continent burned on NYE.

Stay safe and have fun this new year, from all of us at ExxonMobil Australia.

But since these species evolved in a fire-prone environment, why is fire a problem for them now?

Not only are fires becoming more severe and frequent in parts of Australia, but for many species there is not much habitat left. Such species have already declined and are often reliant on habitat that hasn’t been burned for a long time, so a single fire can wipe out entire populations.

This creates complex ecological challenges for land managers and conservationists – especially where prescribed burning is used to reduce fire risk to people and their property.

Prescribed burning can be a valuable tool in protecting habitat from wildfire, but it must be science-based and carefully targeted. Until recently, Victoria had a policy to burn 5% of its land area every year, a practice that was threatening sensitive ecosystems and species, such as the endangered South-eastern Red-tailed Black Cockatoo. The recent lifting of the policy is therefore a major step away from arbitrary management targets and – hopefully – towards science-based conservation.

Other threats may have started the declines and made species more vulnerable to fire. These include habitat loss, disease and introduced predators.

The #bushfires have decimated this study site. No canopy. No understory. No ground cover. Complete incineration. The stench of death is unforgettable. pic.twitter.com/jMFmUN9Phk

There was a climate denier in Mark Sumner’s diary yesterday about the Australian climate crisis. I must say my jaw hit the floor when I read it. Hopefully, he or she, will read these excerpts from the Climate Reality Project, and begin to understand the urgency of the situation. Deniers won’t do that though, they disassociate when you try to speak to them.

Simply put, Australia is already a hot and dry country and it’s expected to generally get hotter and drier without action on climate change. And make no mistake: An increase of 5 degrees Celsius (or 9 degrees Fahrenheit) is a huge deal.

Consider this: “Scientific records over the past million years show that as periodic ice ages ended, global average temperatures rose a total of 4-7 degrees Celsius over the course of about 5,000 years.” What happens in Australia when they rise by about that much in the space of less than 200 years? It’s uncharted territory.

I met this gorgeous ❤️Magpie today he loved our music 🎶 on Yos’s bike and wanted to sing 🎤 along #birds #wildlife #Australia pic.twitter.com/KD18zUdzoQ

There’s also a direct link between a hotter world and more drought. Andrew King, a climate scientist at the University of Melbourne, explained the connection to the Guardian:

“In general climate change is exacerbating drought, mainly because in a warmer world we experience more evaporation from the surface, and we project for that to continue in the future. So when it does rain, more of that water is likely to be lost to the atmosphere through evaporation than before human-caused climate change.”

Zookeepers worked from 6am to save Mogo Wildlife Park, which has Australia’s largest collection of primates as well as giraffes, zebras and rhinos https://t.co/ckDCHZXNBx

Here’s the climate reality: Farmers depend on a steady climate to grow food and raise livestock. The climate crisis makes it increasingly difficult for farmers to grow food for Australia.

As Australia’s climate changes, every type of farmer will be affected – from those who raise dairy cows to fruits and vegetable producers to wine growers and everything in between. According to Melbourne Sustainability Society Institute’s report, Appetite for Change: Global Warming Impacts on Food and Farming Regions in Australia:

This Perentie (Varanus giganteus) is sauntering into 2020 like a boss!

DYK #Perenties are the 4th largest living lizard in the world? They can grow up to 2m long! Seeing this one is a real treat since they're really quite shy.

Here’s the climate reality: The Great Barrier Reef is larger than the Great Wall of China and the only living thing on our planet that can be seen from outer space. It might seem too huge to hurt, but our carbon dioxide emissions are killing the reef.

Ever heard of ocean acidification? We explained it in a blog from 2016:

“Our oceans are an incredible carbon sink — they absorb about 25 percent of the carbon dioxide humans produce every year. But this is changing sea surface chemistry dramatically: when carbon dioxide is absorbed by the ocean, it dissolves to form carbonic acid. The result, not surprisingly, is that the ocean becomes more acidic, upsetting the delicate pH balance that millions and millions of organisms rely on.”

Our oceans are being hit hard by a double whammy: they’re becoming warmer and more acidic – all because of greenhouse gas emissions. Since 1910, Australia’s ocean surface temperatures have warmed by about 1 degree Celsius (or 1.8 degrees Fahrenheit) .

It’s clear that Australia has a lot to lose to climate change if we don’t take action. Unfortunately, much like in the US, Australia’s federal government has not risen to the challenge. Our friends at Australian climate change organization The Climate Council said it well: “Australia lacks credible national climate policy to drive down greenhouse gas pollution. This is why we are not on track to meet even our woefully inadequate 26-28 percent emissions reduction target for 2030.”

Hello world, this is me. ⁣🎶⠀
⠀
This lil' cutie is hanging out in its mother's pouch. Wombat pouches face backwards so it doesn't fill with dirt when mama wombat is burrowing or digging for food!⁣⠀
⠀
Happy #WombatWednesday!⠀
⠀
📸: yousnoozeyoumoose (IG)⠀ pic.twitter.com/mVy2QiNSCB

Australia’s Science Channel shares an opinion piece on one of my pet peeves – Opinion: This is the exact time to be talking about climate change.

A denier’s favourite refrain “but in the 1970’s they warned of an ice age” was only ever a fringe argument picked up by a handful of newspapers. It was certainly not an accepted scientific narrative.

The deniers are wrong. The scientific projections HAVE happened. The bushfires we’re seeing now are exactly what was warned about.

If we’re not talking about climate change and what can be done to a) reduce the effects in the future, and b) mitigate the risks to our communities from the change already occurring, then we’re having the wrong conversations.

A heartfelt THANK YOU to everyone who supported us in 2019. Together we have achieved so much for Australia's threatened species. We look forward to achieving even more in 2020.#PartyPossum #NYE pic.twitter.com/rGrFDUIF2Q