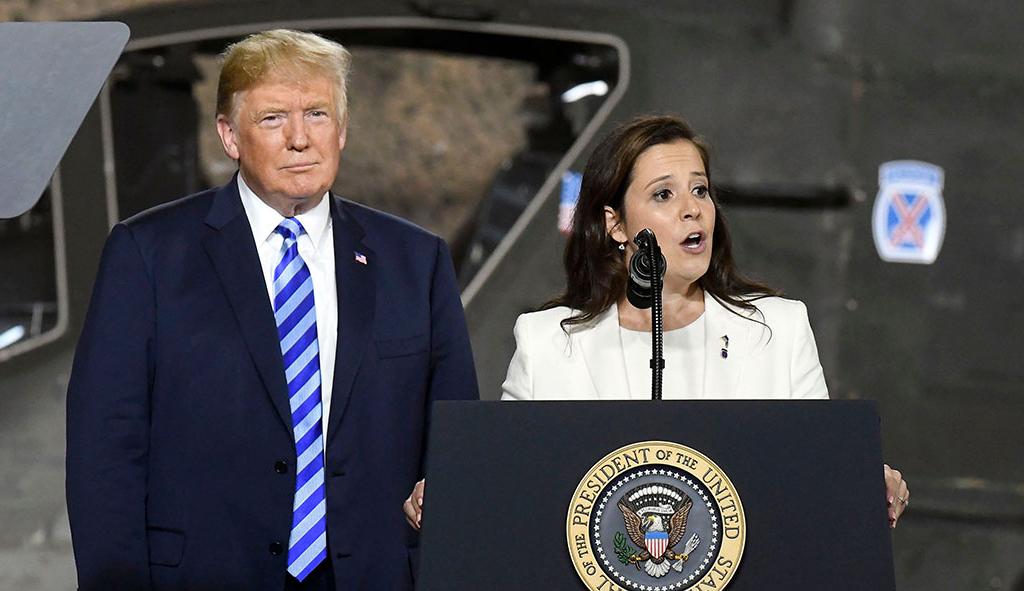 Because she’s a moderate(sic) who believes in the cult of Trumpism.

Revealing. Cheney has a more conservative record than Stefanik but that's not what matters anymore. Loyalty to Trump is the one non-negotiable trait for leading the party. https://t.co/iQ3ZgNkNIx

“In GA…more than 140,000 votes came from underage, deceased, and otherwise unauthorized voters-in Fulton County alone.” — Elise Stefanik, who was one of the 147 GQP Members of Congress who betrayed and attacked America.

Why it doesn't matter at all that Stefanik doesn't have a conservative voting record as robust as Cheney's. https://t.co/AvlNqmi3cj

BREAKING: The No. 2 House Republican is publicly calling for the removal of Rep. Liz Cheney as the party's third-ranking leader in the chamber. Rep. Steve Scalise, the House GOP whip, said he is backing New York GOP Rep. Elise Stefanik for Cheney's post. https://t.co/OYkCumQP6y

“They’re shivving her for her … saying that the election wasn’t stolen and for refusing to debase herself to Cheeto Jesus.” — Meghan McCain

Cheney is a conservative Republican. She shares virtually no policy positions with President Biden and the Democrats. She has been outspoken, repeatedly, when she has disagreed with the new president or with Democrats in Congress. Her credentials and familial ties as the daughter of former vice president Richard B. Cheney put her in the front ranks of the conservative movement.
That is no longer good enough for Republicans. She must, seemingly, agree with Trump’s false characterizations of the election or remain silent in the face of those lies, however damaging they might be. Those are the choices.
House Minority Leader Kevin McCarthy (R-Calif.) has begun to cut her loose. He said on “Fox & Friends” that others in the party are “concerned” about her, that she’s not able to “carry out the message” for the party heading into the 2022 midterms. On a hot mic, he said, “I’ve had it” with her.[…]

The story of the Republican Party in 2021 has been described as a battle for the party’s soul. In reality, the battle is over, at least for now. Cheney and Romney and a handful of others daring to speak the truth about Trump’s election lies are on the losing side. Trump has prevailed. Cheney may well be driven from the leadership in retribution, but most likely with her conscience intact.

The @Liz_Cheney ouster is about more than loyalty to Trump. It shows the GOP effectively liberating itself to overturn future elections whose outcomes Republicans hate, by any means necessary. Note that these same House Rs may be in control on Jan 6, 2025:https://t.co/0MuOzRfDuO