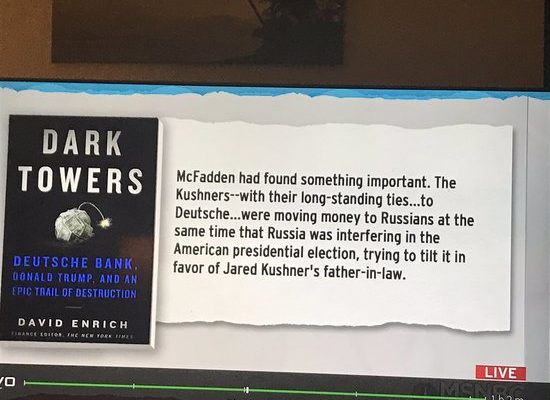 The NY Times tells us of the Trumpian dark towers of debt and its many crimes ranging from money laundering to tax fraud. SCOTUS will be weighing in on Trump’s finances in time to make a difference in the 2020 election. David Enrich’s writing finally emerges to show the dirty details where Russian bank VTB underwrote the Deutsche Bank loans to Trump (and Kushner). Enrich’s story is entwined with the stories of dead bankers as well as the converging story of how money-laundering of the Trump-type is a feature of cronyism’s financial affairs.

The Times' finance editor, David Enrich spent the past two years interviewing Deutsche Bank executives about the firm's relationship with Trump, gleaning a mix of revealing anecdotes and riveting details indicating how some employees viewed Trump as a boon for the growing company while others looked back on their business with the real-estate mogul with “a mixture of anger and regret.”

With the Deutsche Bank subpoena headed for resolution in a matter of months, we may see history repeat itself. Regardless, Dark Towers is an excellent primer for what may well await.

Come June, the supreme court will probably rule on the enforceability of those demands together with other cases concerning Trump’s tax returns – just in time for political convention season. In other words, Deutsche remains relevant to the 2020 elections.

In Dark Towers: Deutsche Bank, Donald Trump, and an Epic Trail of Destruction, David Enrich delivers a master class in financial sleuthing. The New York Times’ financial editor follows the money, plows through paper and talks to dozens of people in the bank’s ecosystem. There are names, places and computer files. This is a first-rate read.

Dark Towers traces the bank’s arc from founding through the second world war to the present, excavates and analyzes Trump’s relationship with his lender of last resort, and lays out the ties that bind Justin Kennedy, son of retired supreme court justice Anthony Kennedy, to the Trump family. In case anyone forgot, Brett Kavanaugh clerked for Kennedy père, who interceded with Trump on Kavanaugh’s behalf.

On December 4, 2017, a German newspaper reported that Robert Mueller,the special counsel investigating Russia’s interference in the presidential election,had subpoenaed Deutsche, demanding records related to its relationship with Trump. Within hours, a number of American news organizations had published their own stories, with anonymous sources confirming that Mueller’s office had issued the subpoenas.

Trump woke up that morning, scanned the headlines on his phone, saw the news about the subpoena, and exploded. “I know my relationships with Deutsche Bank,” the president barked at his lawyer, John Dowd, in a 7 a.m. phone call. After reciting the loans’ details, Trump added: “I’m telling you, this is bullshit!” Dowd organized a phone call with Mueller’s team. One of the prosecutors assured Dowd that the news reports had been wrong; Mueller’s team hadn’t subpoenaed Deutsche for Trump’s records. Word of Trump’s fury circulated around Washington. To any government official paying attention, this was a powerful signal: Investigate Deutsche and risk the president’s wrath.

(43136)
$0.00 (as of May 20, 2022 02:36 GMT -04:00 - More infoProduct prices and availability are accurate as of the date/time indicated and are subject to change. Any price and availability information displayed on [relevant Amazon Site(s), as applicable] at the time of purchase will apply to the purchase of this product.)