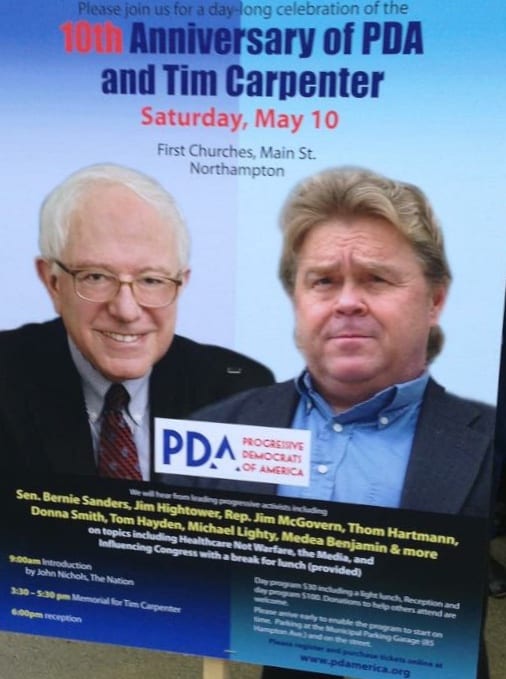 Yesterday, we marked an important anniversary for Progressive Democrats of America (PDA) and the progressive movement. On May 10, 2014 PDA Activists gathered in Northampton, MA to honor the life and leadership of Tim Carpenter—our founder and leader who had just passed away after a long, valiant struggle against cancer. After a lifetime of bold and inspiring progressive leadership, Tim’s final campaign may have been his most momentous.

In late 2013, Tim understood that the 2016 Presidential Election Cycle needed a powerful progressive champion speaking out during the Democratic Primaries, and he selected Sen. Bernie Sanders as that champion. Problem was, Bernie didn’t agree—at least not at first. Undaunted (as always), Tim set out to “draft” Bernie, and the “Run Bernie Run” campaign set out to make Tim’s Dream come true. And thanks to many many people like you, we collected 10,000s of signatures, organized countless house parties and other events, and eventually helped persuade Bernie to run for president as a Progressive Democrat. Tim’s vision came true beyond our wildest dreams.

Tim Carpenter and dozens of other empowered progressives founded PDA in 2004 to achieve progress on the most important issues. Then as in 2013, we were concerned that the presidential campaigns would ignore critical concerns re: the war, global warming, election fairness, justice, healthcare, and more. Our work continues, thanks to your support and dedication!

PDA is proud to mobilize Bernie supporters with our We Want Bernie campaign featuring regular organizing calls and other efforts. Not a Bernie supporter? No worries. We’re always working onHealthcare Not Warfare, Windmills Not Weapons, and battling the Trump Regime at every turn. See below for several actions you can take. If you’d like to volunteer for those campaigns, let Mike Fox know.

We wholeheartedly support the Medicare For All Act in the House and Senate. This legislation will provide comprehensive healthcare for all of us with no out of pocket expenses: no premiums, co-pays, cap, or deductibles, including, mental, dental, vision, prescriptions, medical devices, preventative, women’s health, long-term care, and more.

Last month, Trump vetoed a joint congressional resolution that would end U.S. support for Saudi war crimes in Yemen. The resolution was authored by Senator Bernie Sanders in the Senate and Representative Ro Khanna in the House. PDA supported this effort to reassert Congressional constitutional authority over war and peace, and especially to end the humanitarian crisis in Yemen.Please click here to tell Congress to override Trump’s veto.

Long after hurricanes ravaged their homes, our sisters and brothers in the Caribbean remain in peril. Please take action now! Click here to tell Congress to help the people of Puerto Rico and the Virgin Islands.

PDA Makes it Easy For You to Tell Congress:

We Need a Green New Deal

We appreciate all you do to help make progress on these and other issues. If you’ve never donated to help PDA help you pressure our elected officials, now is the perfect time. We need your support more than ever. Click here to support PDA’s issue organizing.

(43211)
$0.00 (as of May 21, 2022 05:29 GMT -04:00 - More infoProduct prices and availability are accurate as of the date/time indicated and are subject to change. Any price and availability information displayed on [relevant Amazon Site(s), as applicable] at the time of purchase will apply to the purchase of this product.)