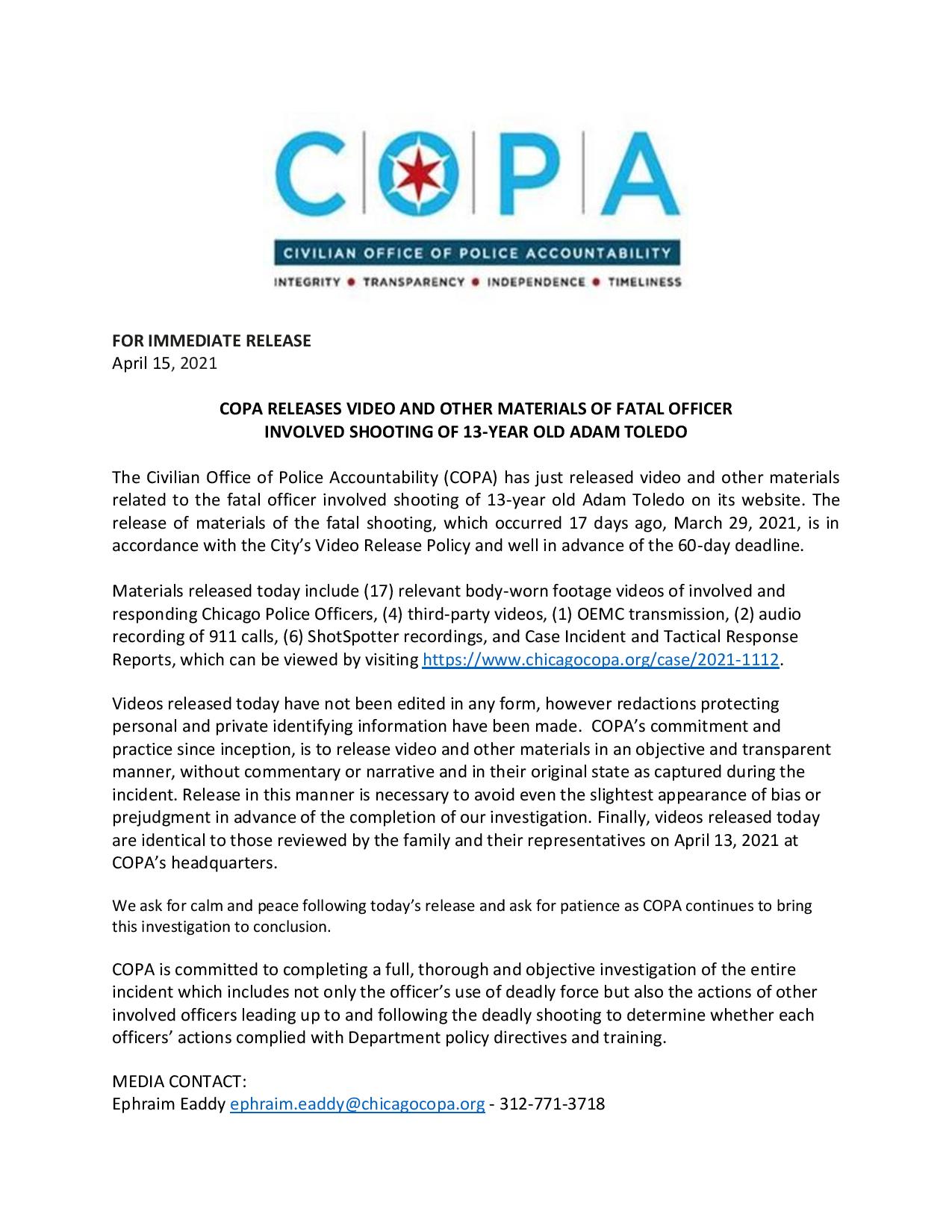 Adam Toledo did have a gun in his possession, but actually complied, dropped the gun and had his hands up when the officer shot him. Toledo’s friend had handed him the gun before fleeing.

CHICAGO — A key detail raised in court about the fatal police shooting of 13-year-old Adam Toledo may have been wrong.

During a bond hearing for 21-year-old Ruben Roman, who was with Adam the night of the shooting, Cook County Assistant State’s Attorney James Murphy described the altercation in a proffer: “The officer tells [Toledo] to drop it as [Toledo] turns towards the officer.  [Toledo] has a gun in his right hand.”

Related Coverage: Videos show Adam Toledo, 13, may have dropped gun as he raised his hands when CPD officer fatally shot him

But now, in response to a WGN Investigates inquiry, the state’s attorney’s office says the detail about Adam having a gun in his hand the moment he was shot was inaccurate.

“An attorney who works in this office failed to fully inform himself before speaking in court,” Sarah Sinovic, a spokesperson for Cook County State’s Attorney Kim Foxx, told WGN Investigates Thursday.  It comes just before the Civilian Office of Police Accountability releases several videos of the incident.

When asked during a Thursday news conference at City Hall, Mayor Lori Lightfoot declined to say whether videos she has seen show the 13-year-old with a gun in his hand.

Police have said a 9MM Ruger was found along a fence next to where Toledo was shot.

BREAKING: Less than a week after a Cook County prosecutor said 13-year-old Adam Toledo had a gun in his hand when he was shot, a spokeswoman for the SAO now says that prosecutor “failed to fully inform himself before speaking in court.”https://t.co/V4miq0zdCg

The videos show the moments leading up to the officer shooting Toledo, the shooting itself and the aftermath.

Video taken from the front door of a Little Village church shows Toledo and 21-year-old Ruben Roman walking down the street before stopping at the corner of 24th Street and Sawyer Avenue, where it appears Roman fired shots at a target that is out of view. Toledo and Roman leave, video footage shows.

Body-camera footage shows an officer — 10th District tactical unit Officer Eric Stillman, according to COPA — chasing Toledo through an alley, with Stillman yelling at Toledo to stop. Stillman catches up to Toledo, who appears to have stopped running near a gap in a fence between the alley and a church parking lot.

Video from a different angle appears to show Toledo toss the gun behind the fence moments before he is shot.

Stillman flashes a strobe flashlight at Toledo and says, “Hands! Show me your fucking hands!”

Immediately after commanding Toledo to show his hands, Stillman shot the boy at close distance. Toledo’s hands were raised when he was shot, the footage shows.

Footage released by police does not show Toledo point or raise a gun at Stillman at the end of the chase. Toledo does not appear to be holding the gun as the officer shot him.

The gun was found alongside the fence behind Toledo, police said.

Toledo collapsed into the parking lot after being shot.