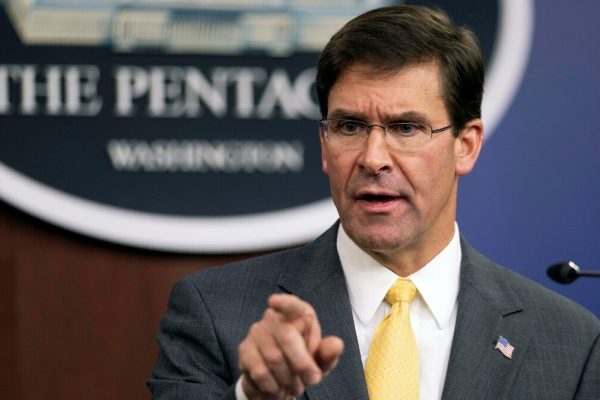 With his nomination of former Raytheon vice president and lobbyist Mark Esper for secretary of defense, Donald Trump essentially chummed the swamp with alligator feed.

Of course, it was kind of a joke for Trump to put a defense contractor in charge of the DoD while at the same time insisting he was “draining the swamp.” But then pretty much everything Trump does is a joke.

And now the only ones laughing are — you guessed it! — defense contractors, who stand to profit (you might even say “profiteer”) from Donald Trump’s latest cranial methane discharge.

Following yesterday’s assassination of Iranian Gen. Qassem Suleimani — which many analysts say will precipitate a wider conflict, if not a full-scale war — defense stocks inexplicably gained ground while the rest of the Dow and S&P 500 took a nosedive.

Northrop Grumman Corp. stock jumped 5.4%. Based in Falls Church, Va., Northrop Grumman makes such aircraft as the B-2 bomber and the upcoming B-21 bomber and is the sole bidder to build the next generation of intercontinental ballistic missiles.

But don’t worry. When Esper is done making the Middle East great again, he’ll content himself with taking long walks on the beach. No chance a grateful defense contractor will hire him as a lobbyist or anything.

Say, has anyone gotten a look at Donald Trump’s stock portfolio? Does he own Raytheon shares? Any hinky purchases of defense stock by Trump cronies we should know about?

Of course not. Nothing to see here. Move along now.