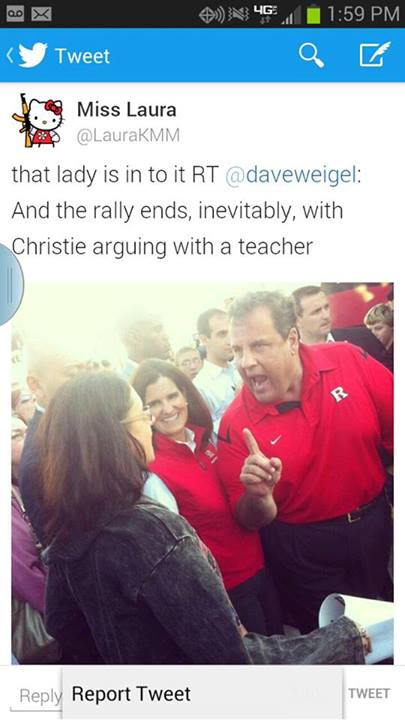 That's what Chris Christie shouted today while his wife smiled at New Jersey public school teacher, Melissa Tomlinson, who dared approach him at the Rutgers football game rally and ask the question, “Why do you portray New Jersey Public Schools as 'failure factories?'”

Dave Weigel of Slate snapped a picture of the incident and posted it to twitter:

Everyone knows Chris Christie loves to be rude and shout at people. Shouting at public school teachers is a 'thing' of his that he enjoys. 99% of the time the people he chews out are women.

The teacher who was bold enough to ask Christie this question admits she was shaking when he jabbed his finger in her face and shouted at her, but she's still proud of what she did. We're proud of her too.

It's a shame Christie will most likely be relected governor on Tuesday, which is probably why he felt it was no big deal to be photographed shouting at a single woman who dared to ask him a question. So nice to see what he really thinks of his constituents and how he treats them.

(22298)
$179.00 (as of May 19, 2022 05:14 GMT -04:00 - More infoProduct prices and availability are accurate as of the date/time indicated and are subject to change. Any price and availability information displayed on [relevant Amazon Site(s), as applicable] at the time of purchase will apply to the purchase of this product.)