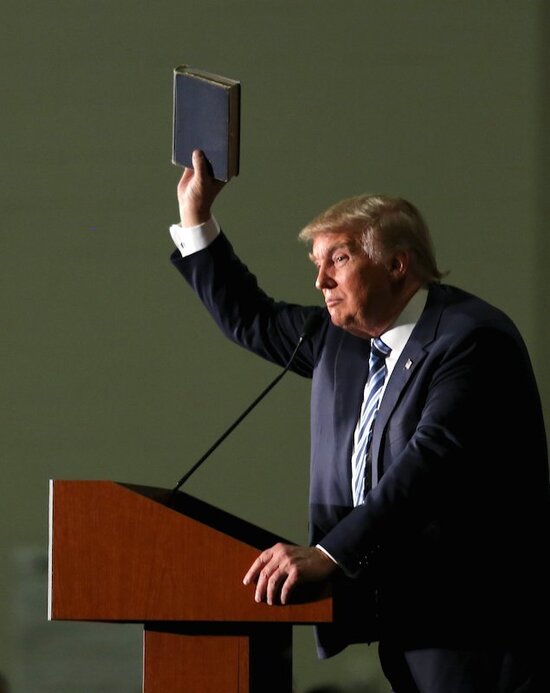 The authoritarian aspirations of Donald Trump have been all too apparent to anyone paying attention for the past few years. He clearly has no respect for the law or the Constitution or the principles upon which this nation was founded. And his flaming narcissism fuels his lust for the sort of unchallenged power of his idols (Vladimir Putin, Kim Jung Un, Xi Jinping, etc.).

Trump's affinity for tyrants and tyranny has always been evident in his behavior. But during a speech before the ultra-rightist Heritage Foundation this week, Trump explicitly articulated his desire to be a dictator. His reasoning was typically incoherent, but the the message he delivered to the enrapt audience of uber-conservatives was unambiguous:

“First they said not too smart that I did that. Then that all went away. I really did that. I said 'Doc Ronny, I gotta take a test.' The problem is that this is essentially a public place. One of the great hospitals of the world, right? But you have a series of doctors sitting here. He said 'If you do badly the word's gonna get out.' I said 'I know that. How tough is it?' He said 'It's very tough.' I said 'Oof. Let's give it a shot.'

“And I did it in front of a panel and we aced it. And one person said 'That's the first time I've ever seen anyone ace it.' So isn't that nice? So all of that stuff stops, okay. It was very nice. But then they made me a dictator instead. I don't know, which would you rather be, a dumb person or a dictator? Perhaps a dictator would be better. I don’t want to be a dumb person.”

Trump: First they said not too smart…But then, they made me a dictator instead. Which would you rather be, a dumb person or a dictator? Perhaps a dictator would be better. I don’t want to be a dumb person. pic.twitter.com/qWstmJkVAj— Acyn (@Acyn) April 21, 2022

So Trump would rather be a dictator than a dumb person? The first thing he needs to learn is that those two things are not mutually exclusive. And he already has the dumb part down. But his juxtaposition of intellect and tyranny isn't surprising. He recently praised Putin as a “savvy” “genius” for his genocidal invasion of Ukraine.

However, Trump's utterly illogical pathway to this viewpoint is characteristic of his trademark asininity. For some unfathomable reason he thought it would be wise to remind people of his humiliating dementia test. The one where he was proud to be able to identify an elephant from a picture, and recall five words. He couldn't even think of five words that weren't immediately around him at the time (person, woman, man, camera, tv).

Of course, the test wasn't tough at all. It wasn't an IQ test. It was a test given to people who were being evaluated for simple cognitive deficiencies. And his account of having astonished everyone because he “aced” it is just one his infamous fantasies. He even references his disgraced doctor – now Texas congressman – Ronny Jackson, who gushed that Trump “has incredible genes” and “might live to be 200 years old.”

Trump's preposterous dementia test boasting is hysterical, but harmless. However, his dictatorial ambitions are serious and warrant concern. That's especially true because the obedient sycophants in his Republican Party, such as GOP House leader Kevin McCarthy, are too cowardly to defy him should he try (again) to seize power. So that leaves it up to the people to do in 2022 and 2024 what they did in 2020. Trump and every corrupt Republican must be defeated at the ballot box for the sake of democracy.

(51687)
(as of May 23, 2022 07:05 GMT -04:00 - More infoProduct prices and availability are accurate as of the date/time indicated and are subject to change. Any price and availability information displayed on [relevant Amazon Site(s), as applicable] at the time of purchase will apply to the purchase of this product.)