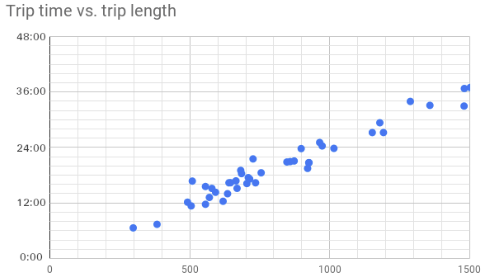 Rei
Every so often one encounters a myth about electric vehicles that's so odd it makes you scratch your head. When it happens just once, it's easy to dismiss, but when it keeps popping up, it becomes time to address it.
In recent weeks, I've seen multiple people assert that, “Sure, you can take EVs on road trips on major highways now, but I like to take the backroads, and there are few to no chargers on backroads. EVs can’t do backroads trips!”  Now, this obviously confused me – not simply because of the fact that it's not true that chargers exist only on major highways, but also for the obvious reason that even if you choose not to drive on a highway, surely you're going to be frequently crossing highways – quite often, near a charger.  Yet simply pointing these facts out is generally met with heavy skepticism.
In order to further expound on this, I decided to conduct an experiment. I wrote a Python script to create 50 random road trips (images at the bottom of this article) which were then simulated by A Better Route Planner, an excellent tool that takes into account a wide variety of factors to create a simulation of a drive in any of a variety of EVs, as well as to help plan routes and stops. Most critically, ABRP has an “Avoid highways” option, making it a perfect fit for this task.
Some notes about the various test factors follow (+ = beneficial to the EVs, – = adverse to the EVs, * neutral to the EVs):
A spreadsheet of the data can be found here. Some graphs summing up the results can be seen below.  First, the distribution of trip lengths and trip times is as follows:
As can be seen, most are “all-day single-day trips”, along with some partial day and two-day trips.
As for the cost per mile of these trips, not including charging before you leave or after you arrive (a 30mpg gasoline car at $3.00/gal is listed in red):
The “exceptionally expensive” cases, while sometimes in part involving driving in particularly bad conditions (such as nearly 50mph headwinds or far-below-freezing temperatures), are most commonly due to the use of third party charging stations – particularly Volkswagen's “Electrify America” network, which costs much more than Tesla's Supercharger network.
The number of stops on the trip and the average time between stops can be seen below:

Notice that the average time between stops is surprisingly long – similar to, if not longer than, most people generally take between stops during trips in gasoline cars (one can of course take more frequent stops if they choose). Stopping is thus not an imposition, but a requirement of your need to refresh your bladder, your legs, your stomach and your mind.  Part of the reason for the long time between stops is that backroads generally have lower average speeds than major highways; this not only means that it takes longer to travel a given distance, but additionally, EVs become more efficient at lower speeds.

As for the length of the charging stops during the various trips and the percentage of the trip spent charging:

To see how much of a difference the upcoming V3 standard makes, here's a 2017 Model 3 charging on a V3 charger:

Additionally, there were two cases where ABRP reported a nominal “slowdown”, yet the speed they reported was basically the same speed that Google reports as normal for said route. Consequently, these – while “redlined” – should probably not be considered slowdowns.

In all of these cases, allowing highway travel for just part of the trip (sometimes just a dozen miles or so) makes the red-line go away.
While one may expect that trying to avoid all highways would lead to frequent detours and backtracking to get to charging stations, this turned out not to be the case – indeed, in only three situations did this happen, 6-10 miles each time. One was one of the North Dakota trips, while the other two were:

This honestly should not be unfamiliar to people driving gasoline cars in remote areas.

In every single other case – regardless of how awful the driving conditions were or where the trip was – there was neither red-lining slowdowns nor any backtracking detours at all.  All remaining valid cases follow (read: prepare to scroll down! Summary follows)

What can we take away from this?  In summary: