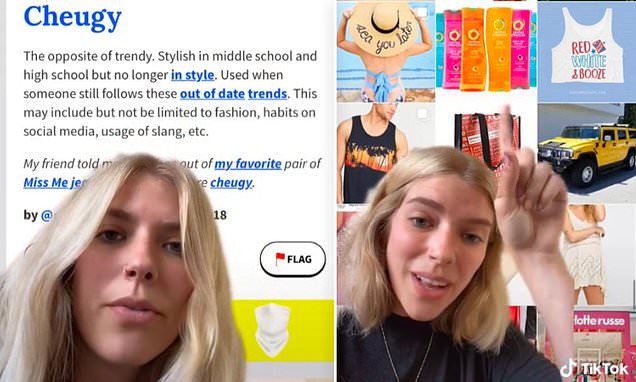 MFP is neologisms that get sticky. Cheugy is the latest, being a term that Generation Z calls Millennials, perhaps it’s the revival of more postmodernism.

Generation Z consumer-brand attacks on Millennials consumption habits may be all that Gheugy is about. Proud Boys and their golf polos may be Cheugy, if only because at least one active member of the military was involved in the 1/6 insurrection. Apparently neo-Marxism isn’t Cheugy, at least to some Trumpists in the military who heeded the subsequent stand-down order to assess military dissent or willingness to support the insurrection as a military coup.

Decided to do the cheugiest thing possible and make an NFT out of the word cheugy. Place your bids cheugshttps://t.co/fpNFYJigV5

Cheugy (pronounced “chew-gee,” and referring to various clothes, accessories, and commodities that owners and wearers perceive as personality-driven when they are, in fact, outdated and basic) energy is all around us, yet, to the majority of my fellow millennial friends, the cheug life seems an unknown path.

Perhaps you’ve seen the recent rash of coverage about cheugy matters in the New York Times, Elite Daily, and various Reddit threads, but when I did a survey of my brethren’s cheug knowledge, some of the common responses were: “What does it mean… basic?”; “It sounds like choad”; and even, “Is it a racial slur?” (As was, “Is it Republican?” “Midwestern?” In many cases, yes. But also, no, not by definition.) It’s all complicated, so let’s unroll the chevron carpet for a little cheug symposium.

According to the New York Times, the origin of cheugy can be traced to Beverly Hills High School, circa 2013, when student Gaby Rasson was at a loss for words to describe the people who not only followed outdated trends, but did so with fervor. In fact, many of the people sporting mass-market The Office inside-joke merch and oversized headbands thought that those accoutrements actually offered them a sense of uniqueness. Thus, le cheug was born, in a flurry of Starbucks Frapps, Repetto ballet flats, Joe Rogan podcast subscriptions, and DIY avocado face masks.

Millennials are no longer the connoisseurs of cool. Zoomers control the internet now. And most things that millennials used to consider ‘neat’ have now become ‘cheugy.’ A term that recently became popular as a result of a viral TikTok, it can be best understood by what is ‘out.’ pic.twitter.com/CIRXaytBb4

“It just means corny, like trying too hard with the trends,” she says, adding that “all of straight TikTok is cheugy, basically.” Nor is it necessarily a bad thing; indeed, if one is designated cheugy, being ashamed or embarrassed about it is possibly the cheugiest thing one can do.

“Cheugy” is a new word to beware for anyone still holding onto outdated military trends, apparently like re-segregating the US military.

Being a bro-vet, for starters, is definitely cheugy. Dressing head-to-toe in veteran-owned apparel line clothing that answers the prompt “tell me you’re a veteran without telling me you’re a veteran” is one thing. Graphic tees, it turns out, are a very cheugy item. Another is the constant sporting of Oakleys, especially around the back of your neck when you’re indoors. Seriously, just take them off. They clash with your equally cringe neckbeard anyway.

Your equivalent to the millennial woman’s “Live, Laugh, Love” sign are those overly edited black-and-white gym Instagram photos shot from the neck down every week with motivational quotes from your favorite Navy SEAL’s new book. Mega-cheugy. After all, one of the greatest tell-tale signs of cheuginess is the unironic use of cliché hashtags.

It’s probably more basic, but let’s also add buying a Camaro, Mustang, or Charger in taxi-cab yellow or fire-engine red to the list of cheugy things. It’s sad we have to say that calling your car your baby or financing any vehicle at 20-or-more percent is one the most unfortunate military stereotypes that has carried from generation to generation. Even worse is when you deck that car out with bumper stickers that say “Semper Fi” or “Honk for Freedom.”

However, a tenet of avoiding cheuginess appears to be “not caring what anyone else thinks.” So I guess, if you truly love all the potentially cheugy things I listed, you could just live your life without worrying what Gen Z thinks. What a concept.

Apparently “neo-Marxism” might be another of those chuegy things, because it’s unlikely that Marxist thought has infected the US military amidst a plethora of Bogaloo Boys and Oath Keepers.

A commander of a U.S. Space Force unit tasked with detecting ballistic missile launches has been fired for comments made during a podcast promoting his new book, which claims Marxist ideologies are becoming prevalent in the United States military.

Lt Col. Matthew Lohmeier, commander of 11th Space Warning Squadron at Buckley Air Force Base, Colorado, was relieved from his post Friday by Lt. Gen. Stephen Whiting, the head of Space Operations Command, over a loss of confidence in his ability to lead, Military.com has exclusively learned.

“This decision was based on public comments made by Lt. Col. Lohmeier in a recent podcast,” a Space Force spokesperson said in an email. “Lt. Gen. Whiting has initiated a Command Directed Investigation on whether these comments constituted prohibited partisan political activity.”

Lohmeier’s temporary assignment in the wake of his removal was not immediately clear.

Earlier this month, Lohmeier, a former instructor and fighter pilot who transferred into the Space Force, self-published a book titled “Irresistible Revolution: Marxism’s Goal of Conquest & the Unmaking of the American Military.”

“Irresistible Revolution is a timely and bold contribution from an active-duty Space Force lieutenant colonel who sees the impact of a neo-Marxist agenda at the ground level within our armed forces,” a description of the book reads.

Lohmeier sat down last week with L. Todd Wood of the podcast “Information Operation,” hosted by Creative Destruction, or CD, Media, to promote the book. He spoke about U.S. institutions, including universities, media and federal agencies including the military, that he said are increasingly adopting leftist practices. These practices — such as diversity and inclusion training — are the systemic cause for the divisive climate across America today, he said.

From his perspective as a commander, Lohmeier said he didn’t seek to criticize any particular senior leader or publicly identify troops within the book. Rather, he said, he focused on the policies service members now have to adhere to to align with certain agendas “that are now affecting our culture.”

Regarding Defense Secretary Lloyd Austin, he said, “I don’t demonize the man, but I want to make it clear to both him and every service member this [diversity and inclusion] agenda, it will divide us, it will not unify us.”

Austin on Feb. 5 ordered all military services to observe one-day stand-down on extremism in the ranks. As part of his stand-down, Lohmeier said, he was given a booklet that cited the Jan. 6 riot at the Capitol as an example of extremism, but did not mention the civil disobedience and destruction of property that took place following the death of George Flloyd, a Black man, at the hands of a white police officer in Minneapolis last May.