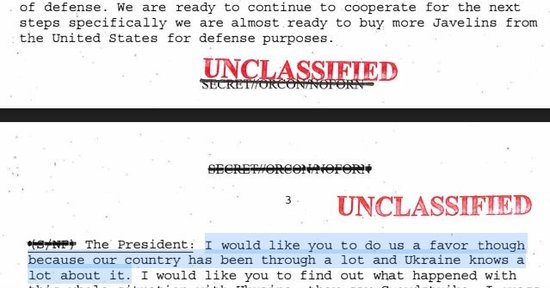 A new article at Politico tries to isolate the justification for a presidential request from a foreign government(s). It only proves that the smoking gun is yet still a smoldering arsenal, now that there are multiple whistle-blowers.

Here’s the big question on which the potential impeachment of President Donald Trump could turn: Is it ever appropriate for a U.S. president to ask a foreign government to investigate a political rival?

Democrats seem to assume the answer is no, that this kind of request could never be proper, given the implications for our electoral system. “Smoking gun” is what they say about Trump’s urging Ukraine—and now also China—to investigate Joe and Hunter Biden.

Republicans, meanwhile, contend that it is perfectly normal, and justified, for Trump as president to ask the Ukrainians to look into potential corruption that involves Americans and could, in theory, affect U.S. relations with that country.

But the real answer to this question is more complicated. History shows that a president sometimes might be justified in asking a foreign country to investigate a political rival, including a former vice president. So, the mere fact of Trump’s request for an investigation into the Bidens, without considering the circumstances of the request, is not enough to impeach him.

The problem is whether there are non-transactional requests in such discourse.

In this case, it is not the appeal to foreign governments but that it has a material reality beyond the utterance. It includes the setting of a monetary value, a price for information ($250M) and the extortion/bribery actions as a pattern of corrupt intent. Even “the ask” has a price level in the case of abusing power for personal gain. The contingency of taxpayer money being held up for personal gain makes it more than a request for an investigation by a foreign government.

Yet there are precedents going back to the founders so we should be grateful for the examples.

Going back to America’s early days, there have been occasional instances in which presidents would have been justified had they sought foreign investigations into political rivals. In 1804, Aaron Burr contacted the British government, apparently to peddle a plan for severing part of the United States to form a new country in western territory. In response, President Thomas Jefferson had Burr prosecuted for treason, and he was found not guilty. We can stipulate that Jefferson was excessively involved in the treason trial. But had he instead simply asked for Britain’s assistance in gathering more information about Burr’s involvement in this plot, that would have been entirely appropriate given the high stakes for the country.

This is true despite the fact Jefferson was seeking reelection at the time and Burr, an incorrigibly ambitious politician, might still have coveted the presidency. It was unlikely that Burr would have been a serious rival to Jefferson’s reelection; the Federalist Party, which opposed Jefferson, hated Burr for having slayed its hero, Alexander Hamilton. But Burr was still active politically and could not be discounted completely. Whatever the circumstances of the electoral rivalries at that moment—and campaigns back then were, of course, very different from today—Jefferson as president would have been acting responsibly if he had requested Britain’s assistance in the investigation of Burr.

Analysis: Is it ever OK for a president to ask a foreign country to investigate a political rival? https://t.co/z8NyQbL4gp

Remember when Trump railed against the Foreign Corrupt Practices Act, which bars businesses from paying bribes to overseas officials, calling it “ridiculous” and a “horrible law?”

When Barr and Durham showed up in Rome late last month, diplomatic and intelligence officials at the American embassy there didnÃ¢Â€Â™t know what he was doing in Italy https://t.co/whxkjPuDvF

Could you imagine for a split second if Obama had gone on national television and asked Ukraine, China to investigate Romney? What would Republicans be doing? What would Fox News be saying? Total partisan hypocrisy. This was election interference plain and simple #PerryMadeMeDoIt

Trump and Barr are trashing relationships with US allies all in their effort to exonerate Russia for interfering in the 2016 election.

Have you ever seen anything so insane, @FrankFigliuzzi1?

This is now a full bore conspiracy to corrupt multiple government agencies and place them at the disposal of Trump's reelection campaign. It involves numerous cabinet members and State Dept officials.

And given Barr's role, it may result in prosecutions:https://t.co/BfXoNyDJ0w pic.twitter.com/Kcz1p9faNc

Ã¢Â€ÂœNobody wants to be the zebra that strays from the pack and gets gobbled up by the lion,Ã¢Â€Â a former senior administration official said in assessing the current consensus among Senate Republicans. @philiprucker @costareports https://t.co/R7YXo8vyu2

DonÃ¢Â€Â™t forget that last Fourth of July @RonJohnsonWI and quite a few othe @HouseGOP were in Russia meeting with Putin. And Russia was gloating. pic.twitter.com/VngNFIRYOq

There's a lot of focus on Repub Senators&how they'll eventually vote on impeachment, but there's another issue right now: Who could give $ to Trump knowing what we know already about how he tried to cheat the 2020 election w/secret help of foreign govt?

In numerous recent conversations with colleagues, including last week's senior staff meeting, White House acting Chief of Staff Mick Mulvaney has said he thinks President Trump could win 45 states in 2020 after the impeachment process — a magnitude of landslide that few if any independent pollsters would dare predict.