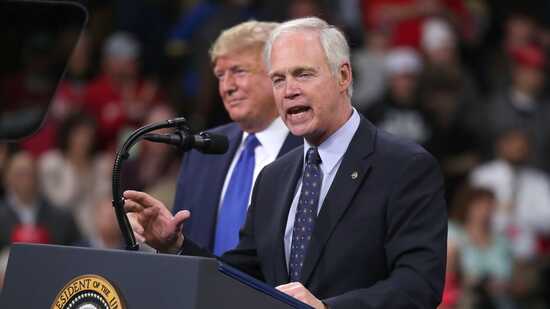 Since I told you about my latest mission to defeat the members of Congress who betrayed the Constitution on January 6th, I’ve heard from a lot of people who are just as fired up as I am.

Today, we’re naming the person at the top of our target list for 2022: Sen. Ron Johnson from Wisconsin. Not only did he help perpetuate the “Big Lie” in the lead-up to January 6th, he’s long been one of the most vocal defenders of the insurrectionists — even saying out loud that he’d only have been afraid that day if the rioters had been Black Lives Matter protesters. (Seriously.)

Ron Johnson is up for re-election next year — he must be defeated, for the sake of our democracy. If you want to help make that happen, chip in right now and let’s start organizing.

Our grassroots efforts on the ground are centered around amplifying the voices of real people in Wisconsin who are fed up with Ron Johnson. Unlike most political operations, we’re not relying on TV ads and focus-grouped sound bytes to dictate our strategy.

At Democratic Majority Action, we’re following the data — and it’s clear that voters on the fence in an election are much more persuaded by regular people telling it like it is. So that’s exactly who we’ll be organizing and counting on in the months to come.

The whole country will be watching to see whether Ron Johnson can survive politically after everything he’s done to hinder our democracy. Wisconsin isn’t a ruby-red place where you can get away with pretty much anything as long as you have an “R” next to your name — the state voted for Obama twice and flipped from Trump to Biden in 2020. This is shaping up to be the most hotly contested Senate race of the cycle.

Meanwhile, Ron Johnson keeps making it clear he’s no moderate. He shows sympathy with the Jan. 6th rioters and extremists who spread disinformation. He’s even helping turn a global pandemic into a partisan issue. Just days ago, Johnson questioned the need for widespread vaccination against COVID-19 — demonstrating that he’s either rooting for the virus or that he simply doesn’t understand basic science.

Somewhere down the road, we’re going to look back at this moment and realize that we had one chance to defeat this dangerous strain of radical ideology in our politics. I want to say that we did everything we could to fight — and that we prevailed.

Wisconsin is Ground Zero in 2022, and Ron Johnson must lose his seat — chip in today to help fund our grassroots efforts to make that happen.

We’ll be adding members of the “Sedition Caucus” to our list of target races in the days ahead. Stay tuned.

Until then, thank you for everything you do for our country,

I also received this e-mail from the Committee To Protect Health Care PAC:

As the Biden Administration and politicians across the aisle were working to get the COVID-19 pandemic under control, a group of Republican politicians were standing in the way of progress, putting American lives at risk.

One Republican Senator who has put his state and Americans at risk during the pandemic is Wisconsin Senator Ron Johnson.

Wisconsin Senator Ron Johnson has made it his mission to continue to spread misinformation and hold up efforts to save American lives during the COVID-19 pandemic. He has:

We must hold Senator Ron Johnson accountable for spreading misinformation about the COVID-19 pandemic and the life-saving vaccines. Will you sign our petition to DEMAND the U.S. Senate hold him accountable? →

The American public is leaning on leaders in their states to gather accurate information regarding the pandemic. We already know that states which are led by Republican politicians and with a large number of Trump supporters have had disproportionately slow pandemic and vaccine distribution responses.

Ron Johnson has continued to put Wisconsin residents, and Americans who follow him, at increased risk. He continues to spread falsehoods that are detrimental to getting the pandemic under control.

Will you sign our petition demanding the U.S. Senate hold Ron Johnson accountable for spreading misinformation about the COVID-19 pandemic and life-saving vaccines?

Thank you for helping us hold dangerous politicians accountable,

FYI, here’s the latest on the Democratic Primary. First off, here’s an interesting piece on Tom Nelson (D. WI) that’s worth a read:

Four years ago Outagamie County Executive Thomas Nelson teamed up with union leaders and management to help wrest a paper mill threatened with closure from the scrap heap.

They won, and the former Appleton Coated plant in Combined Locks continues to operate under new ownership. It’s a story that shows “sometimes the little guy, sometimes the underdog wins,” says Nelson. And, he adds, it shows the importance of workers and unions in the broader economy. “We really undervalue the role of labor.”

Nelson tells that story in his book One Day Stronger (Rivertowns Books, 305 pp.), published in March. Its development and publication are intertwined with Nelson’s decision to run for the U.S. Senate in 2022.

When I asked Sarah Godlewski how she sees her bid for the U.S. Senate in the context of Wisconsin political history, her response was immediate. And blunt.

“One of the reasons that I’m running is that Ron Johnson is actually trying to bring back McCarthyism 2.0,” state treasurer — who last week launched a bid for the Democratic nomination to take on Johnson, the two-term Republican senator whose penchant for conspiracy theories recalls the ugly politics of former Wisconsin Sen. Joe McCarthy — said.

Godlewski is not the only Democrat who has compared Johnson with McCarthy, the scandal-plagued Republican whose actions in the 1940s and 1950s were so irresponsible and dishonest that he was eventually censured by the U.S. Senate. One of Godlewski’s rivals for the Democratic nomination, Outagamie County Executive Tom Nelson, portrays Johnson as a modern-day McCarthy, arguing, “their politics are identical. The effects of their politics are identical. The difference is the time period and the change in media. That’s what makes Johnson so dangerous. Social media has amplified him.” A potential contender for the seat, Lt. Gov. Mandela Barnes, muses about how “the generations-long boomerang from Joe McCarthy to Ron Johnson is truly something to behold.”

“Alex has been very consistent with his advocacy for unions and collective bargaining in particular,” said Bill Carroll, the local union's political and legislative coordinator.

The race may be in its early stages with a crowded field now assembling in the Democratic primary, but Carroll said “for a U.S. Senate office, we believe Alex is the person for the job.”

Lasry, on leave from his executive job with the Milwaukee Bucks, was involved in securing a labor agreement between the team and building trades that covered both the construction of Fiserv Forum and the nearby Deer District.

Lasry said the endorsement shows his campaign “has momentum.”

He backed the Protecting the Right to Organize Act, which would strengthen labor's ability to organize. The bill passed the House but faces a likely Republican blockade in the U.S. Senate, where 60 votes would be needed to break a filibuster.

Wisconsin Democrat Alex Lasry, who announced in February that he’s running for U.S. Senate, seriously out-fundraised his competitors during the first quarter of 2021, according to filings with the Federal Election Commission.

The candidate, son of Milwaukee Bucks co-owner Marc Lasry, is on leave from his senior vice president role with the team. But his basketball connections have buoyed his fundraising haul.

According to filings, he collected almost $1.1 million through March 30. Among those who’ve donated are Bucks head coach Mike Budenholzer, former coach Jason Kidd, general manager Jon Horst, president Peter Feigin, and co-owners Wes Edens and Jamie Dinan, along with some of their wives.

No first-time challenger has ever raised more in the first quarter of a Senate race in Wisconsin, according to Lasry’s campaign. Jessica Taylor, Senate editor at The Cook Political Report, said Lasry's fundraising total makes a statement, but it's too early to declare a front-runner.

“Sarah Godlewski got in after the … quarter had ended. We're still waiting on several other candidates as they look at the race — possibly Lt. Gov. Mandela Barnes,” she said. “And so we just don't know how large the field is right now.”

In a news release, Lasry said he’s building a grassroots campaign, with about 85 percent of contributions coming from donations of $200 or less. Lasry has also received significant contributions from Wall Street, with Bloomberg highlighting donors like investors Jason Mudrick and David Einhorn. It's no secret Lasry has lots of connections, Taylor said.

It remains to be seen who will come out on top and who else will jump but it’s clear Democrats are eager to finally get rid of RoJo the Traitor next year. Also, I received this e-mail yesterday from the Wisconsin Democratic Party:

You read that correctly: Wisconsin Republicans went out of their way to kill a policy that could generate $166 MILLION in revenue for our state.

Pardon our language, but we’re pissed off. Legalizing marijuana is not only an incredibly popular proposal that could generate revenue for the state, but it’s also the right thing to do — especially for marginalized communities that have been disproportionately affected by past marijuana enforcement.

We’re furious by this vote, and if you’re as mad as us, click here right now to find your legislator, then give them a call tell them to support the Badger Bounceback Agenda, which includes forward-thinking ideas like marijuana legalization that would raise $150M+ in tax revenues every year.

We’re trying to put the pressure on the WI GOP, so that every person who voted against this policy knows what a mistake it was. Can you join us by clicking here right now to find your state legislator? Then, give them a call and tell them to support the Badger Bounceback Agenda.
Thanks for all you do,

Let’s keep up the momentum to flip Wisconsin Blue again in 2022. Click below to donate and get involved with these Wisconsin Democrats campaigns:

(32745)
$348.00 (as of May 17, 2022 07:13 GMT -04:00 - More infoProduct prices and availability are accurate as of the date/time indicated and are subject to change. Any price and availability information displayed on [relevant Amazon Site(s), as applicable] at the time of purchase will apply to the purchase of this product.)