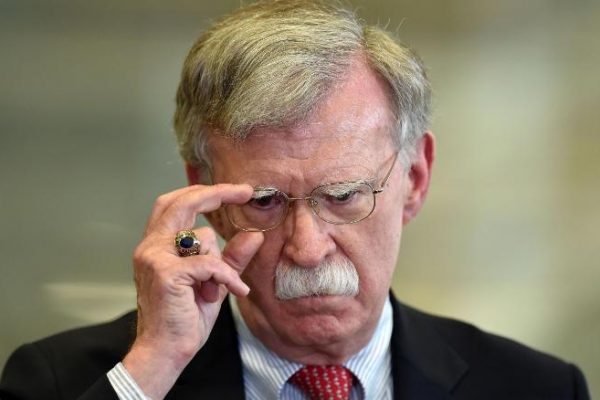 Yes, there are several other diaries on this topic, including one that just got posted on the front page, but I want to focus on Bolton’s actions and timing.

First, I need to point out that Bolton was never subpoenaed by any House committee. His deputy. Charles Kupperman, was, and his lawyer (who is also Bolton’s lawyer) asked a court to decide whether he needed to honor a subpoena. That suit was dismissed last week as moot, not on the merits. It’s possible the lawyer advised both of them that had the suit proceeded, the judge would have ordered Kupperman (and by extension, Bolton) to comply.

Bolton did not say he would ignore a House subpoena; he said nothing at all about that, since there are no pending House actions that might result in a subpoena. (The House will be looking into the Suleimani killing, but Bolton had nothing to do with that as far as we know. If the House reopens the Ukraine mess, they could call for Bolton’s testimony.) The Democrats in the Senate, on the other hand, have made it clear they want to hear from Bolton, and now Bolton has agreed to talk at a Senate trial.

“It now falls to the Senate to fulfill its constitutional obligation to try impeachments, and it does not appear possible that a final judicial resolution of the still-unanswered constitutional questions can be obtained before the Senate acts,” Mr. Bolton wrote. “Accordingly, since my testimony is once again at issue, I have had to resolve the serious competing issues as best I could, based on careful consideration and study.” New York Times

Yes, he’s asking to be subpoenaed first, but so did several witnesses at the House hearings. And a CNN analysis says Bolton’s statement puts new pressure on McConnell to allow witnesses.

So my question to the assembled multitude is: Why now? What’s changed?

What’s changed is Trump’s assassination of Suleimani and the blowback. I’ve seen several arguments here that Bolton wants war with Iran, and there’s a diary right now arguing that Trump ordered the assassination in part as a way to buy Bolton’s silence (and Pompeo’s).

I’m not convinced of that. For one thing, Pompeo and Bolton were staying silent, and there was no indication that was about to change, so Trump didn’t do it for that reason. In fact, it now appears to have the opposite effect: I think Bolton decided to testify because of the assassination.

Yes, Bolton would love a war with Iran. But he wants a controlled war. He may be a far-right hawk, but he does understand how the world works (even as he tries to change how it works), and unlike Pompeo (and Pence), he has no interest in an apocalypse. I think Bolton is concerned that Trump has gotten even more wild, more unhinged, more out of control, than he was while Bolton was watching him from his NSA post. Remember, Bolton left the White House out of concern for how Trump was behaving, and that was back when he was being somewhat rational. (Emphasis on the “somewhat.”)

Bolton is not going to testify in any way that will help Trump. He runs too great a risk of perjury if he does, given all the previous testimony about how he felt over the Ukraine shambles. His offer to testify now, in a setting where the whole country has to watch, can only mean he’s decided that Trump needs to go.

(42774)
$0.00 (as of May 15, 2022 17:13 GMT -04:00 - More infoProduct prices and availability are accurate as of the date/time indicated and are subject to change. Any price and availability information displayed on [relevant Amazon Site(s), as applicable] at the time of purchase will apply to the purchase of this product.)