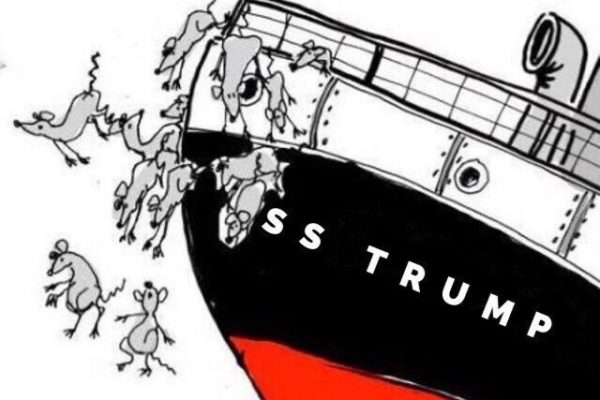 Revisionist policy in new docs tell us about the OMB paper trail in Arms for Dirt. Trump still held up military aid authorized by Congress to solicit investigations By Ukraine into Bidens. It’s still Bribery.

This undercuts GOP argument that the Ukraine hold may have been part of a broader review of foreign aid packages. Trump apparently asked about the Ukraine aid specifically after reading an unspecified media report…https://t.co/AIYmHdw2oU pic.twitter.com/KiyMYbZNoD

Today there was much fanfare about Sandy officially ordering the hold on the aid July 25, same day as the phone call.

But transcript makes clear it was in the works beforehand. Working on it on July 22, had a legal question resolved July 24 pic.twitter.com/rhGH0g4XLg

A confidential White House review of President Trump’s decision to place a hold on military aid to Ukraine has turned up hundreds of documents that reveal extensive efforts to generate an after-the-fact justification for the decision and a debate over whether the delay was legal, according to three people familiar with the records.

The research by the White House Counsel’s Office, which was triggered by a congressional impeachment inquiry announced in September, includes early August email exchanges between acting chief of staff Mick Mulvaney and White House budget officials seeking to provide an explanation for withholding the funds after the president had already ordered a hold in mid-July on the nearly $400 million in security assistance, according to the three people familiar with the matter who spoke on the condition of anonymity to discuss internal White House deliberations.
One person briefed on the records examination said White House lawyers are expressing concern that the review has turned up some unflattering exchanges and facts that could at a minimum embarrass the president. It’s unclear whether the Mulvaney discussions or other records pose any legal problems for Trump in the impeachment inquiry, but some fear they could pose political problems if revealed publicly.
People familiar with the Office of Management and Budget’s handling of the holdup in aid acknowledged the internal discussions going on during August, but characterized the conversations as calm, routine and focused on the legal question of how to comply with the congressional Budget and Impoundment Act, which requires the executive branch to spend congressionally appropriated funds unless Congress agrees they can be rescinded.

transcript of non-deposition Charles Kupperman did not show up for. https://t.co/vFk0elpvIY Schiff: “The committees may therefore consider Dr. Kupperman’s defiance of the subpoena as evidence in a future contempt proceeding.” then Schiff & Jordan go at it pic.twitter.com/2Z0kpk0JH1

-Congress would have done nothing in response to the whistleblower
-Trump would have made Ukraine investigate Biden
-Pence, Pompeo, & Mulvaney wouldn't have been implicated
-Giuliani wouldn't be facing criminal charges