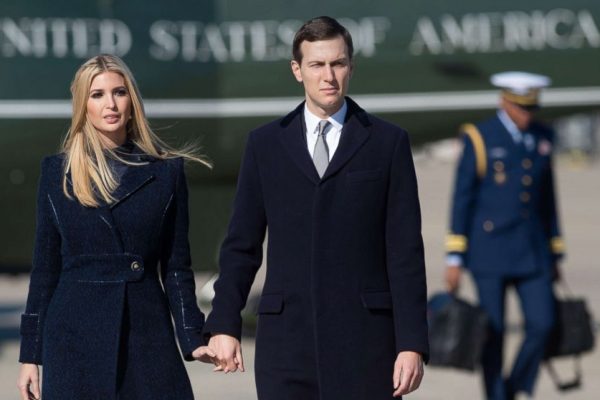 On cue, Ivanka appears on a news outlet in order to humanize the Trumpian psychosis ranting against his Senate trial. She softballed her way through accountability for her father’s immigration policy, because that’s “not her portfolio”. Mehdi Hasan should have been asking the questions:

Note the word Presidential near the words Ivanka, future, and WH. They are enabling her 2024 campaign. Authoritarians need family dynasties to keep up their illicit income and stay out of jail. Once they get into power it is very difficult to get them out. https://t.co/HePzliZMY7

“Face the Nation” has been on air since 1954 and is considered to be one of the most prestigious and high-profile interview shows on American television. Yet Brennan’s interview with Ivanka — which was released in full on Sunday morning, and pegged to the new policy of paid parental leave for federal government workers — could be considered a low point in the show’s storied 65-year history.

Don’t believe me? Here are three of the first four questions that Brennan asked Ivanka about her father’s historic impeachment:

At one point, referring to Trump’s deranged six-page letter to House Speaker Nancy Pelosi in which he referenced the Salem witch trials, Brennan told Ivanka that her father “seemed angry.”

Are you kidding me? Is this what CBS and Brennan consider to be journalism? Holding power to account? Asking tough questions?

So here are a dozen better, and much tougher, questions that Margaret Brennan could — and should — have asked senior White House adviser Ivanka Trump on “Face the Nation.”

9. What do you think qualifies you to be a senior adviser to the president of the United States, and participate in talks with the leader of North Korea, given your background is in clothing and fashion?

10. What do you think qualifies your husband to be a senior adviser to the president of the United States, and a Middle East peace negotiator, given his background is in real estate?

11. In July 2018, you announced you were shutting down your clothing business to focus on your White House role advising your father, so why were you still getting trademarks from the Chinese government in November 2018? And how are all these trademarks not a massive conflict of interest?

12. You told ABC News that your father had “no involvement” in the granting of controversial security clearances to you and your husband, and yet we have since learned that Trump personally pushed for you both to be given clearances, against the advice of his then-chief of staff John Kelly and then-White House counsel Don McGahn. You weren’t telling the truth in that ABC News interview, were you?

White House announces Javanka are headed to Davos — and that Jared outranks Ivankahttps://t.co/JatLZKlKLA

IVANKA: I am a senior advisor to the president and should be treated as such

There are reports that IMPOTUS may also attend.

In a world where the 26 richest people own as much as the poorest 50 per cent, you might have expected to see massive demonstrations in Davos last week. Why didn't we? @isamayault on what happened to the anti-globalisation movement:https://t.co/iDk5TgkD1m

(22501)
$179.00 (as of May 22, 2022 02:23 GMT -04:00 - More infoProduct prices and availability are accurate as of the date/time indicated and are subject to change. Any price and availability information displayed on [relevant Amazon Site(s), as applicable] at the time of purchase will apply to the purchase of this product.)