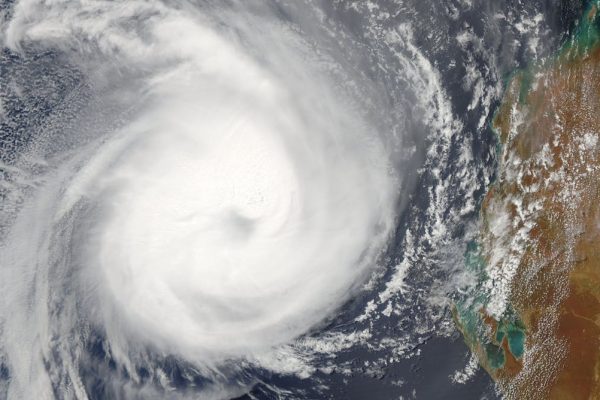 Some good news for the north coast of Western Australia. A tropical Cyclone promises heavy rain and winds to the parched, tinder dry, NW region of the island continent. “The Bureau of Meteorology’s Neil Bennett said the cyclone’s expected path would take it into WA’s southeast and close to the fires which continued to burn”.

On January 6, the Australian Bureau of Meteorology posted warnings and watches for Blake. The Warning zone stretches from Cockatoo Island to De Grey. The Watch zone extends from De Grey to Whim Creek, including Port Hedland and extending inland to include Marble Bar and Nullagine.

One of the ways NASA researches tropical cyclones is using infrared data that provides temperature information. Cloud top temperatures identify where the strongest storms are located. The stronger the storms, the higher they extend into the troposphere, and they have the colder cloud temperatures.

#Cyclone #BLAKE has formed off Kimberley coast of Western #Australia. I'm surprised how good it looks & won't be surprised if it comes ashore stronger than forecast Tue night. Region is fortunately sparsely populated—but Broome, Bidyadanga could get swiped by destructive winds. pic.twitter.com/u5ZTBGW5xV

Robinson Myer writes in the Atlantic on how Australia is inevitably doomed by the heating of the globe.

Australia is caught in a climate spiral. For the past few decades, the arid and affluent country of 25 million has padded out its economy—otherwise dominated by sandy beaches and a bustling service sector—by selling coal to the world. As the East Asian economies have grown, Australia has been all too happy to keep their lights on. Exporting food, fiber, and minerals to Asia has helped Australia achieve three decades of nearly relentless growth: Oz has not had a technical recession, defined as two successive quarters of economic contraction, since July 1991.

But now Australia is buckling under the conditions that its fossil fuels have helped bring about. Perhaps the two biggest kinds of climate calamity happening today have begun to afflict the continent.

Just to reiterate, 2019 was the hottest (and driest) year on record for Australia… 📈

Perhaps more than any other wealthy nation on Earth, Australia is at risk from the dangers of climate change. It has spent most of the 21st century in a historic drought. Its tropical oceans are more endangered than any other biome by climate change. Its people are clustered along the temperate and tropical coasts, where rising seas threaten major cities. Those same bands of livable land are the places either now burning or at heightened risk of bushfire in the future. Faced with such geographical challenges, Australia’s people might rally to reverse these dangers. Instead, they have elected leaders with other priorities.

Australia will continue to burn, and its coral will continue to die. Perhaps this episode will prompt the more pro-carbon members of Australia’s Parliament to accede to some climate policy. Or perhaps Prime Minister Morrison will distract from any link between the disaster and climate change, as President Donald Trump did when he inexplicably blamed California’s 2018 blazes on the state’s failure to rake forest floors. Perhaps blazes will push Australia’s politics in an even more besieged and retrograde direction, empowering politicians like Morrison to fight any change at all. And so maybe Australia will find itself stuck in the climate spiral, clinging ever more tightly to coal as its towns and cities choke on the ash of a burning world.

The Prime Minister and other climate deniers operating the wheels of power in Australia have done their best to blame the green movement for blocking bushfire hazard reduction. It works well with the clueless base of Scott Morrison, but it is not true.

Graham Readfearn writes in the Guardian:

Hazard reduction is the management of fuel and can be carried out through prescribed burning, also known as controlled burning, and removing trees and vegetation, both dead and alive.

Hazard reduction is carried out by fire authorities, national park staff and individual property owners who can apply for permits to clear areas around their buildings. Coordination of activities happens through local bushfire management committees. There are 120 committees in NSW.

Prof Ross Bradstock, the director of the centre for environmental risk management of bushfires at the University of Wollongong, has previously told Guardian Australia: “These are very tired and very old conspiracy theories that get a run after most major fires. They’ve been extensively dealt with in many inquiries.”

The 2018-19 annual report of the NSW Rural Fire Service says: “The ability of the NSW RFS and partner agencies to complete hazard reduction activities is highly weather dependent, with limited windows of opportunity. Prolonged drought conditions in 2018-19 adversely affected the ability of agencies to complete hazard reduction works.”

U.S. firefighters arrive in Australia to help relieve firefighters who have been fighting the #Australiabushfires for months #Australiafires pic.twitter.com/HvqbYKprKf

Nice read from the Huffington Post: Naomi Klein On Looming Eco-Fascism: ‘We Are Literally And Politically Flammable’

In 2019, some factions of the global far-right that gained power in the past decade started to abandon their traditional climate denialism and adopt new rhetoric that looks increasingly eco-fascist, an ideology that defends its violent authoritarianism as necessary to protect the environment.

In France, the leader of the far right, Marine Le Pen, refurbished Nazi-era blood-and-soil rhetoric in a pledge to make Europe the “world’s first ecological civilization,” drawing a distinction between the “ecologist” social groups who are “rooted in their home” and the “nomadic” people who “have no homeland” and “do not care about the environment.” In Germany, the anti-immigrant Alternative for Germany party’s Berlin youth wing urged its leaders to abandon climate denialism. The manifestos posted online by the alleged gunmen in massacres from Christchurch, New Zealand, and El Paso, Texas, explicitly cited climate change as a motivation for murdering immigrants and minorities.

“This is what it means to have people so close to the edge,” Klein said. “There is a rage out there that is going to go somewhere, and we have demagogues who are expert at directing that rage at the most vulnerable among us while protecting the most powerful and most culpable.”

Stunning photograph shows bushfire smoke turning the Australian sky into a re-creation of the Aboriginal flag@NACCHOAustraliahttps://t.co/hdTJ8CXZA4

From the Financial Times: Australia’s bushfires have exposed its leaders’ failings

Against this background, when blazing bushfires broke out across eastern Australia, Mr Morrison stumbled. Eager to play down scientists’ warnings that a hotter, drier climate would help to make fires more frequent and intense, his ministers’ initial response to the fires smacked of politically calculated complacency. The deputy prime minister, Michael McCormack, said Australia had endured fires “since time began” and victims did not need the “ravings” of “woke capital city greenies”. Two weeks ago, when Sydney was blanketed in a thick haze of smoke, Mr Morrison gave a press conference in the city where he appeared more eager to discuss a religious freedom bill than bushfires.

Our people are highly trained & professional, but not always able to complete the mission on first try.
This video shows how heavy smoke from bushfires has prevented some C27J & C130J flights from reaching #Mallacoota & #Merimbula #AusAirForce #AustralianFires #YourADF pic.twitter.com/PhNjNIUVHf

Mr Morrison often argues that Australia accounts for just 1.3 per cent of global carbon emissions. Setting aside the fact that its per capita emissions are among the world’s highest, it is true that cutting pollution in Australia alone would not physically prevent its bushfires, or the devastating floods and drought it has endured in recent times. Global warming requires a global response. But that response will never come if wealthy nations such as Australia continue to behave as if climate breakdown is a problem for others. Mr Morrison is now paying a political cost for his inaction. A far higher price will be paid in future for the bleak litany of climate failures his government represents.