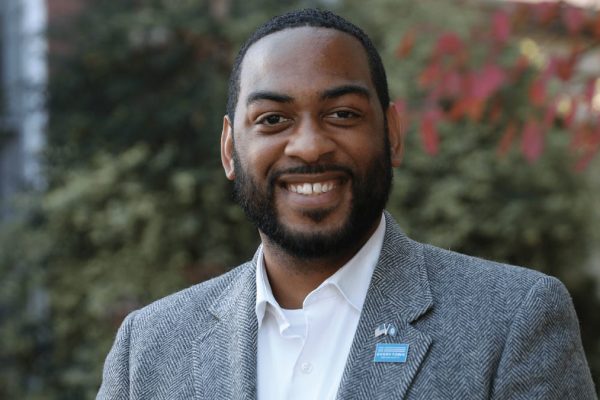 Freshman State Represenative Charles Booker from Louisville has officially declared that he will run in the Democratic primary for U.S. Senate this year against Moscow Mitch.  Booker is no shrinking centrist.  He’s a hard charging progressive.

Booker said state Democrats have failed to topple McConnell — who was first elected when Booker was born in 1984 — because they are too busy “dancing around” the GOP leader. He said the party’s nominee in 2020 must take the fight to McConnell.

“There are some in the Democratic Party who still believe that the way to beat Mitch is by running to the soft center, by saying nothing and taking no positions,” Booker said. “But we’ve tried it their way, and we’ve lost — repeatedly.”

“You don’t beat the most unpopular Senator in America by running away from him, or trying to be like him. You win by putting him on the defensive, holding him accountable, making sure he has to answer for what he’s done to us, and shining a bright light on the reality that he has profited from our pain.”

He really isn’t wrong about that.  The textbook disaster example of this strategy was Alison Lundergan-Grimes in 2014.  Grimes tried to out redneck Moscow Mitch during that election.  And actually Grimes did so badly that she gave Moscow Mitch his first landslide victory in KY.

To be fair to our moderate friends in the Democratic Party, there are plenty of caveats about Booker’s bid.

Booker will enter the primary as an untested underdog who is one of the most progressives contenders to run statewide. But the first-term legislator, who represents a predominately African American district, is barely known outside of Louisville, his hometown.

So check off the box on racism, at least when you have a Democratic label.

Then, there is the issue that Booker is not known outside of Louisville.  And to win statewide, a Democrat needs to appeal to some of those suburban districts outside of Louisville and — God, I hate to say it — appeal to enough rural voters.  Except for the Beshear family, I haven’t seen any Democrats thread that needle effectively in the last few years.

Now, here is where I really disagree with the reporter Phillip M. Bailey:

The Booker campaign will be as much a test of how far can progressive politics go in Kentucky. Those voters didn’t do much to help Democrat Adam Edelen in the Democratic primary for governor.

Edelen, a former state auditor, made overtures to court liberal voters but received only 20% of the vote. Booker also won’t be the only progressive contender in the race as Mike Broihier, a Lincoln County farmer, and Steven Cox, a Hopkins County pharmacist, have been campaigning for months.

I voted for Beshear in the primary.  I’m a progressive.  And so is my elderly Mom who also voted for Beshear.  Why did we do that?  Because Edelen used some Republican talking points against Andy Beshear.  In fact, he spent too much time attacking Andy Beshear, and it was a huge turnoff to Democratic primary voters of all stripes.

What are Booker’s chances?  Hell, I don’t know.  I’ve been doubting my political judgments of late.  Until Booker entered the race, I gave a donation to Mike Broihier.  Unfortunately, McGrath has a ton of money and the Democratic Establishment behind her.  I feel more comfortable with my prediction that McGrath may fail against Moscow Mitch because she has damaged her authenticity brand.

McGrath is no Andy Beshear.

Yes, folks.  I wil say this for the umpteenth time.  If McGrath wins the primary, I will vote for her in the general.  But she is a seriously flawed candidate who may join Alison Lundergan-Grimes and several other failed Democratic candidates in the Kentucky Political Hall of Shame.

As for Booker, I will wait and see how he does.  If I had some cash, I’d consider sending some his way.  But I really do not have the means to support even the candidates I whole heartedly support this year.  Maybe he will figure out a way to garner the Media attention he needs?

(33066)
$348.00 (as of May 20, 2022 06:01 GMT -04:00 - More infoProduct prices and availability are accurate as of the date/time indicated and are subject to change. Any price and availability information displayed on [relevant Amazon Site(s), as applicable] at the time of purchase will apply to the purchase of this product.)