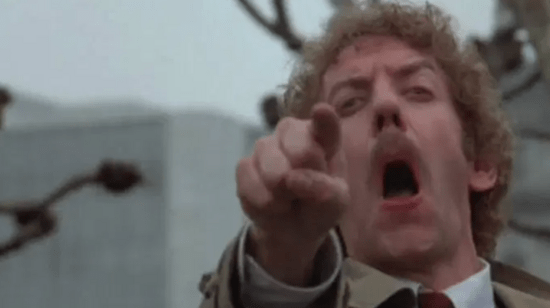 So I know C-SPAN’s whole shtick is to simply report the news without editorial comment, but maybe they could make an exception here and there? Like when a member of one party accuses the entire opposition party of eating babies? Just spitballing here.

“We need women like [Marjorie Taylor-Greene] in there, otherwise these Democrats are gonna keep eating babies and cutting the faces off of them.”https://t.co/zCxmLtcLN9 pic.twitter.com/LNAqlLSbV2— Ben Collins (@oneunderscore__) February 4, 2021

HOST JOHN McARDLE: “John is in Wilmington, Delaware. Republican. John, what are your thoughts?”

CALLER: “Well, I support President Trump. I think he’s gotta get back in there in that White House, and they can’t get people like Marjorie Taylor Greene out of office. We need women like her in there, otherwise these Democrats are going to keep eating the babies and cutting faces off of them. We need President Trump, we elected him, and it’s time to get back in there and do his job.”

McARDLE: “John, what do you think about members who voted against President Trump when it came to that impeachment vote on the House floor, and none bigger than the third Republican in the leadership of the House—that would be Congresswoman Liz Cheney.”

CALLER: “Well, I don’t know much about her. I think her father was a little bit better than her in there. I think maybe she should be expelled.”

On the one hand, that’s a horrible accusation to level without offering evidence. On the other hand, I lost all my great-grandma’s baby-face recipes five years ago during my move from Wisconsin to my hollowed-out volcano lair, so I’m pretty bummed. And I gave money to Joe Biden, FFS. I’ve never once been invited to one of these parties. I’d never go, of course, but it’s always nice to be asked. No matter what it is. Right?

Also, why is McArdle asking the caller about Liz Cheney after he just fucking accused Democrats of eating babies? And why is he adopting the tone of a regional ag reporter asking the deputy secretary of agriculture about the current price of hog futures?

Does anyone else feel like the world has gone completely bonkers? I just found out that two—two!—of my siblings are now anti-vaxxers (at least with respect to the COVID vaccine).

I feel like a character in Invasion of the Body Snatchers right before this happened:

If I weren’t an agnostic, I’d ask you to say a prayer for me and my kin. But I know the only thing you maniacs are interested in is baby sacrifices, so I guess I’ll just have to ride this out sans celestial intercession.

Hey! Ask me anything! Really, you can—in the official Twitter “Ask Me Anything” Pennyfarthing thread. You can ask about my latest book, Goodbye, Asshat: 101 Farewell Letters to Donald Trump … or my lifelong quest to become a real boy … or my uncanny, almost eerie resemblance to an elderly Jack Klugman. It’s up to you. Go now! Click here!

(8)
(as of May 18, 2022 02:00 GMT -04:00 - More infoProduct prices and availability are accurate as of the date/time indicated and are subject to change. Any price and availability information displayed on [relevant Amazon Site(s), as applicable] at the time of purchase will apply to the purchase of this product.)