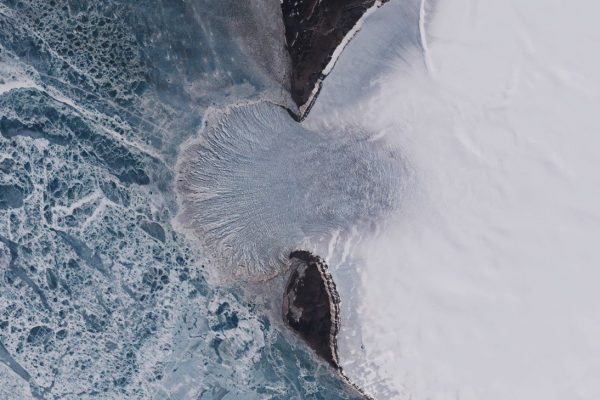 The annual meeting of the American Geophysical Union was held on December 9 in San Francisco. There should be a lot of updated information on climate change released to the public in the coming weeks.

Two items discussed was permafrost and glaciers, including those from Greenland and Antarctica. The other is a new form of permafrost thawing not included in current climate models.

High in the Russian Arctic, in the chilly waters straddling the Kara and Laptev, an 84-billion-ton island ice cap is projectile vomiting into the sea. Scientists say it could hold useful clues about what to expect as the world continues to warm.

The Vavilov Ice Cap, nestled in Russia’s Severnaya Zemlya archipelago, suddenly started to surge forward in 2013. This is not an uncommon event for glaciers — every so often, pressure will build up behind the ice and cause it to temporarily slip forward. These surge events can last anywhere from a few months to a year or more, and they’ll typically stabilize on their own.

But in 2015 — two years after the surge started — the Vavilov Ice Cap was still going. By then, it was moving faster than ever, flowing forward at a rate of about 26 meters per day and dumping 4.5 billion tons of ice into the sea over the course of a single year.

“You used to have a gate that constrained the ice, and then you lose this gate,” Zheng said. “So all of this ice at a higher place just collapsed down into the ocean.”

Even when they appear to be stationary, glaciers are typically flowing forward — just so slowly it’s barely noticeable. There’s a reason for the phrase “moving at a glacial pace.” Until 2013, Vavilov Ice Cap was likely inching forward at an imperceptible rate.

The researchers believe the ice first began to surge when it pushed past a mound of sediment on the landscape that had previously served as a barrier holding it back. When this happened, it slid onto a smoother patch of bedrock and slipped forward.

In 2019, E360 reported from some of the most remote places on the planet to see how they are being affected by climate change. In this piece, @ckatz99 explored the growing threat of acidification to the Arctic’s cold seas and their rich marine life. https://t.co/Zh6zS1rsI8

From the abstract published in the AGU research letters: The Possible Transition From Glacial Surge to Ice Stream on Vavilov Ice Cap

A glacier surge is a sudden speedup of glacier flow coinciding with a large advance of the ice front. Some glaciers surge periodically every 10–100 years, and so surge mechanism is thought to be independent of climate change. However, some recent surges have evacuated so much ice that another surge is unlikely to occur in the same place again. A glacier surge at the Vavilov Ice Cap, Russia, is one of these cases. Since 2013, the glacier has drained more than 11% of the ice basin (9.5 Gt) into the ocean. After the initial surge in 2013, the glacier still retains fast flow at around 1.8 km/year, an unusually high and long‐lasting speed for a glacier surge. To understand the future of the surge, we use satellite images to calculate surface elevations and ice speeds, and analyze their change over time for the glacier. The results reveal that the glacier now physically behaves more like an “ice stream,” a stream of fast‐flowing ice within an ice sheet, which can probably flow at high speed for a long time and drain ice efficiently. This is the first documented case of an ice stream‐like feature ever being formed.

New results relying on five decades of satellite observations show extensive changes to glaciers at the Earth’s north and south poles, a result of global warming.