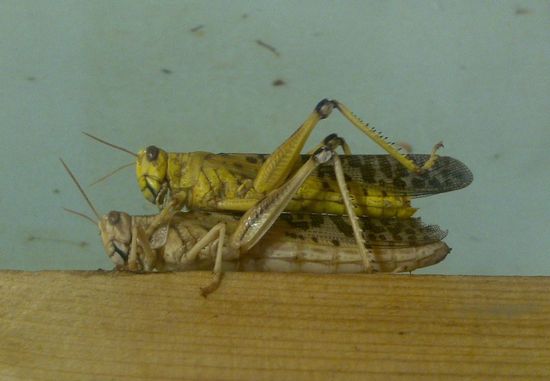 If you’re asking when climate change is going to “happen,” you’re really asking when’s it going to happen to “me,” because it’s already happened to many other people. Eric Roston

Swarms of Desert Locusts (Schistocerca gregaria) have haunted parts of Russia, Spain, Africa, the Middle East, South Asia and, SW Asia with loss of food crops and starvation for thousands of years.

Schistocerca gregaria is more dangerous than other locust species because of their ability to migrate vast distances in rapid time. These swarms are causing “tremendous damage in Uganda, Kenya, Ethiopia, Somalia, Eritrea, and Djibouti and threaten even more countries in East Africa.”

This year the locust swarms have become even more deadly due to climate change and the Indian Dipole. The Dipole has caused severe flooding and landslides in East Africa and the bushfires in Australia.

The Indian Ocean Dipole – often called the “Indian Niño” because of its similarity to its Pacific equivalent – refers to the difference in sea-surface temperatures in opposite parts of the Indian Ocean.

Temperatures in the eastern part of the ocean oscillate between warm and cold compared with the western part, cycling through phases referred to as “positive”, “neutral” and “negative”.

The dipole’s positive phase this year – the strongest for six decades – means warmer sea temperatures in the western Indian Ocean region, with the opposite in the east.

The result of this unusually strong positive dipole this year has been higher-than-average rainfall and floods in eastern Africa and droughts in south-east Asia and Australia.

During quiet periods—known as recessions—desert locusts are usually restricted to the semi-arid and arid deserts of Africa, the Near East and South-West Asia that receive less than 200 mm of rain annually. In normal conditions, locust numbers decrease either by natural mortality or through migration.

However, the last five years have been hotter than any other since the industrial revolution and since 2009. Studies have linked a hotter climate to more damaging locust swarms, leaving Africa disproportionately affected—20 of the fastest warming countries globally are in Africa. Wet weather also favours multiplication of locusts. Widespread, above average rain that pounded the Horn of Africa from October to December 2019 were up to 400 per cent above normal rainfall amount. These abnormal rains were caused by the Indian Ocean dipole, a phenomenon accentuated by climate change.

A single square kilometer filled with locusts can consume as much as 35,000 people in one day, according to the FAO. Adult locusts can eat their own weight—about two grams—of fresh vegetation, and travel upwards of 150 kilometers (93 miles), in a 24 hour period.

Heavy rains in late 2019 are the primary cause for the unusually bountiful locusts. Data from the International Research Institute for Climate and Society show that parts of East Africa and the Sahel region have received as much as 15 inches more rain than normal over the last three months of 2019. Warmer than normal temperatures—one of the hallmarks of climate change—can also play a role in desert locust swarms. The severity of this swarm means mitigation measures and international aid will very likely be needed to address the situation, which could cause increased food insecurity and malnutrition in the affected regions.

This news couldn’t be worse for a region still recovering from extreme weather. A climate phenomenon known as the Indian Ocean Dipole (IOD) resulted in a warmer western Indian ocean than usual. This meteorological condition makes it more likely for heavy rain and storms to form off the coast of East Africa. And indeed, no less than eight cyclones formed in the basin last year. Mozambique was hit the hardest by Cyclones Idai and Kenneth, which caused widespread flooding. The heavy rains have come after farmers in East Africa deadly with multiple years of drought. That these locusts are now poised to descend upon recovering crops is truly tragic.

The New Humanitarian warns that within weeks new swarms twenty times larger than the current plague will emerge from the newly hatched pests. The hatchlings will begin to swarm just in time for planting season. Twenty-two million people are suffering and dying from acute famine currently.

This week the swarms – the largest in several decades – reached Uganda’s Karamoja region from Kenya, and there is a risk they will also spread into Tanzania, even South Sudan, where some 60 percent of the population faces severe hunger after more than eight years of war.

As those swarms spread, a new generation of locusts is emerging in northern Somalia.

In Somalia, an unprecedented effort to kill massive locust swarms with biocontrol | Science "FAO has ordered 4 tons of the Metarhizium biopesticide, enough to treat about 80,000 hectares." | AAAS https://t.co/lmASppwxOw

“Hopper bands are on the ground, which means in a couple of weeks we will have immature swarms,” Keith Cressman, senior locust forecasting officer for the UN’s Food and Agriculture Organisation, told The New Humanitarian.

In the rest of the region, bright yellow mature insects have begun laying eggs – as many as 80 per female. Left untreated, the newly-hatched hoppers will develop and swarm again, just in time for the planting season in March and April, devastating crops and pasture in a region where tens of millions of people already face extreme hunger.

Wiki explains the important distinction between solitary versus gregarious locusts and the part they play in swarming.

Desert locusts have two phases, the solitary phase and the gregarious phase. This is a type of polyphenism. It has been shown that solitary locusts nymphs and adults can behave gregariously within a few hours of being placed in a crowded situation, while it takes gregarious locusts one or more generations to become solitary when reared in isolation.[9] There are differences in morphology and behaviour between the two phases. In the solitary phase the hoppers do not group together into bands but move about independently. Their colouring in the later instars tends to be greenish or brownish to match the colour of the herbage. The adults fly at night and are also coloured so as to blend into their surroundings, the immature adults being grey or beige and the mature adults being a pale yellowish colour. In the gregarious phase the hoppers bunch together and in the later instars develop a bold colouring with black markings on a yellow background. The immatures are pink and the mature adults are bright yellow and fly during the day in dense swarms.[8]

One of the many excellent people who are are surveying locations of swarms, filming movement of desert locust at Kariari village, Kiambere, Embu County. They overnight on trees, head to ground to warm up and move with the winds. Up to 100km/day pic.twitter.com/GW2oIq4QR3

The change from an innocuous solitary insect to a voracious gregarious one normally follows a period of drought, when rain falls and vegetation flushes occur in major desert locust breeding locations. The population builds up rapidly and the competition for food increases.[10] As hoppers get more crowded, the close physical contact causes the insects’ hind legs to bump against one another. This stimulus triggers a cascade of metabolic and behavioral changes that cause the insects to transform from the solitary to the gregarious phase. When the hoppers become gregarious, their colouration changes from largely green to yellow and black, and the adults change from brown to pink (immature) or yellow (mature). Their bodies become shorter, and they give off a pheromone that causes them to be attracted to each other, enhancing hopper band and subsequently swarm formation. The nymphal pheromone is different from the adult one. When exposed to the adult pheromone, hoppers become confused and disoriented, because they can apparently no longer “smell” each other, though the visual and tactile stimuli remain. After a few days, the hopper bands disintegrate and those that escape predation become solitary again. It is possible that this effect could aid locust control in the future.[citation needed]

Though Pakistan had to declare a ‘national emergency’ due to locusts swarms, the government was able to get control of the situation in Punjab province.

In a remarkable alliance of cooperation and planning between India and Pakistan, five back to back meetings on the looming crisis occurred without political rancor.

Back in 2019, multiple districts of Rajasthan and Gujarat faced huge damage to standing crops.

As per reports, there is a forecast of a bigger invasion of even greater magnitude, June onward if compared to the last year.

As per agriculture ministry, it is also predicted that, invasion could occur in scheduled desert area (2 lakh sq km) of India in June 2020 with advent of Monsoon by spring-bred swarms from southeast Iran, southwest Pakistan and the Horn of Africa that may be of a greater magnitude than last year.

#climatechange Swarms of locusts consuming Africa
Each female locust can lay over 100 eggs and after 2 weeks millions more emerge and cycle goes on and on
Locusts can fly 200 KM a day
A swarm in 1 day can eat as much food as entire population of Kenya https://t.co/qkvbSqBkXY pic.twitter.com/ZR4NMpEXyL

Locust swarms have similarities to wildfires, explained Overson. Sure, no one wants their house to burn down. But wide-scale suppression of wildfire, a natural phenomenon, has resulted in vastly overgrown forests, contributing to explosive infernos in the Western U.S. What might killing billions of locusts do? It’s best not to find out.

To fend off some super-swarms from devouring human food, the primary mission today is prediction. The Food and Agricultural Organization of the United Nations currently strives to forecast the swarms. Where will the locusts strike? Locust populations can explode after the right rains, at the right times, or after mild winters, explained Overson.

But, there’s a slew of other things to better account for stressed Couzin. “We’re at the tip of the iceberg of what we need to know” for better predictions, he said, like how billions of insects will react to changing weather, what there is to eat hundreds of miles ahead — and how much locusts will eat each other.

#Locust swarms are affecting east Africa, Middle East and Pakistan, it will reduce the food production, #famine warning in 2020 pic.twitter.com/QDUSyZgtHW

“Locusts are highly cannibalistic,” explained Couzin, noting that they start cannibalizing when swarming begins and food starts to vanish. “As soon as resources are limited they turn on each other.”

Though locust swarms impact about one in 10 people on Earth, there’s a glaring lack of funding for swarm research. In part, this is because the swarms exist in boom and bust cycles, so there might be less research interest in the years, or sometimes decades, between outbreaks. What’s more, Couzin pointed out that locust swarms usually aren’t descending upon the rich world. “It’s affecting poor people,” he said, so there’s a lack of interest from wealthier nations.

(43137)
$0.00 (as of May 20, 2022 06:03 GMT -04:00 - More infoProduct prices and availability are accurate as of the date/time indicated and are subject to change. Any price and availability information displayed on [relevant Amazon Site(s), as applicable] at the time of purchase will apply to the purchase of this product.)