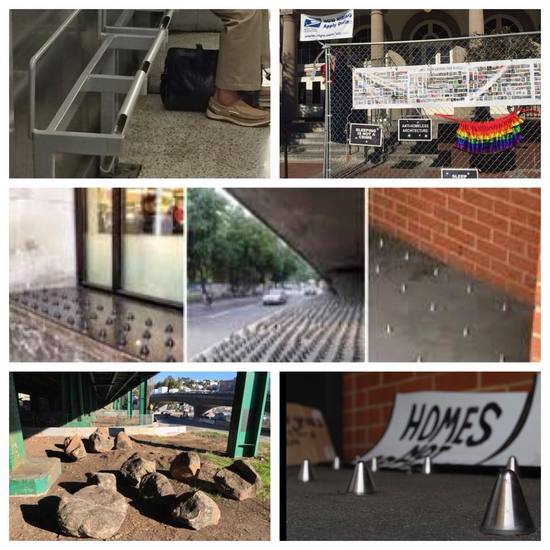 Within shouting distance of the offices of some of the greatest wealth-producing engines of all time, in view of some of the most expensive property in the world, Farha walked San Francisco's streets on Friday. Kelley Cutler, one of those providing Farha with the tour reported that she remarked

“I have traveled all over the world seeing slums and people living in poverty, but what I have heard and seen so far here in the US, in just the last few hours, is stunning to me. It's just so… cruel. There is so much hatred towards poor people here.

She was referring to the anti-homeless laws, such as life sustaining activities like sitting and sleeping being criminalized… when there are no alternative, no housing or shelter…

She was talking about her visit to the slums in Mexico last week and how it was the slums, but there was community living in poverty working together to support each other. Here in the states the government does Sweeps to break up communities and tells them to “move along”.

On Saturday, members of the East Oakland Collective on tour with Farha reported her verdict on conditions on the other side of the Bay:

Oakland's treatment of the homeless is tragic, undignified, degrading and inhumane.

Darwin BondGraham of the East Bay Express wrote a good article on her visit to Oakland, leaving us with this quote from her:

“Every person I spoke to today has told me, 'we are human beings,' [[speaking of homeless residents she had talked to]] But if you need to assert to a UN representative that you are a human, well, something is seriously wrong.”

On Sunday Farha came to Old City Hall in Berkeley, CA, there to talk with residents of the homeless encampment ensconced on the grounds.

This camp has its origins in the long and long-suffering history of First They Came for the Homeless, a political action and direct-action organization of those living on the streets (C.f. First They Came for the Homeless – Why Are We Here? A Berkeley Homelessness FAQ). Their goal is to illustrate the plight of the homeless and push for the rights of homeless people – housing and equality before the law – much as it seems is the Rapporteur’s goal (C.f. her recent essay, Housing is a human rights issue – and 2018 must be the year to address it).

There she spent hours listening and asking questions.

Of Mike Zint, an organizer with First They Came for the Homeless.

Of EmilyRose Johns, a lawyer working with First They Came for the Homeless who is bringing to trial the City of Berkeley for conduct unbecoming a City with respect to its homeless (C.f. Sullivan v Bay Area Rapid Transit and City of Berkeley).

(Just recently she and her plaintiffs prevailed for the nonce as Federal District Court Judge Alsup did not accede (in large part) to Berkeley's Motion to Dismiss, allowing the lawsuit to continue.)

And of other members of the encampment and the community who told their stories. (left)

Since FTCftH was evicted from a piece of land known as HERE/THERE in early November,  (Berkeley homeless camp moves from ‘Here There’ site to Old City Hall) instead of going away they have multiplied. Their diaspora resulted in three camps – the one we see in the photos below at Old City Hall, and two others around town.

What the Special Rapporteur saw in Berkeley were people, both homeless and not, at this camp and the others, striving for just a little bit of a better tomorrow. Figuring out how to make a community on the edge work.

With mutual aid. A food table for community giving and sharing. Rides to doctors' appointments. And their latest project – employing donated solar panels to help power the encampments.

In all, the three camps combined have a capacity of 2,080 watts, which is enough for 40 people that inhabit these areas.

Farha gets it. As she wrote just weeks earlier in the afor-referenced Guardian article

Strategies must transform how governments, at all levels, interact with those who are homeless and inadequately housed. Instead of viewing them as needy beneficiaries, objects of charity, or, worse, as criminals, they must instead recognize that people who are homeless also have rights – and are active citizens who should be involved in decisions affecting their lives. This would ensure that strategies respond to people's own experiences.

She is also not one to pull punches.  In a Guardian article written today, 1/22/18 (San Francisco or Mumbai? UN envoy encounters homeless life in California) about her visit she says

“In international human rights law, providing shelter to people who are homeless is the absolute minimum standard for any country, regardless of resources…. [[ and speaking to a homeless resident of San Francisco]] “Did you know you have a right to housing?” …  “That’s something your government is supposed to do. I hate to tell you, you’re being ripped off.”

There should be no homelessness in America. With great wealth should come great responsibility, to misquote a famous superhero. Instead, we are “wealthizing” the already wealthy and telling those with nothing to “move on” or arresting them for the necessities of existence.

But maybe, just maybe, as we seem to insist on continuing down the path of refusing to do anything to ameliorate the conditions…

“…when you're seeing the numbers of people who are homeless here and in every other city, you just know it’s structural.” — Leilani Farha

… that produce the sights that Farha saw around the Bay, we can at least let those suffering in them find their own solutions while offering a helping hand, instead of telling them no one can offer them food or be far too ready with a set of handcuffs.

(85442)
$0.00 (as of May 15, 2022 20:45 GMT -04:00 - More infoProduct prices and availability are accurate as of the date/time indicated and are subject to change. Any price and availability information displayed on [relevant Amazon Site(s), as applicable] at the time of purchase will apply to the purchase of this product.)