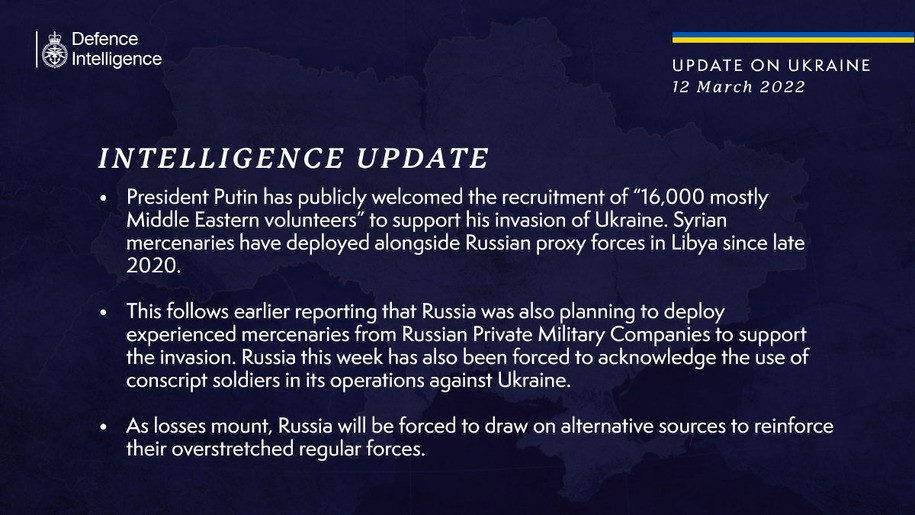 An “operative lull” seems now ready to end. Bombardment resumes and the messaging about “foreign fighters” increases with the slowing of the Russian advance to take major cities. Smaller cities that have been captured are being repressed by Russians and some proxies with brutal efficiency. The war continues to be about logistics and continuing chaos as refugees now are at 2.6 million. Russia now announces that they will attack supply shipments, as they continue to suppress social media outlets and threaten to invoke reciprocal economic sanctions.

Day 18 of Russia’s invasion of Ukraine begins with more attacks. Lviv’s mayor’s office confirms to me that there was a missile strike on Yavoriv’s military facilities before daybreak. Yavoriv is a military town 10 miles from Poland and home to an international training facility.— Christopher Miller (@ChristopherJM) March 13, 2022

Volodymyr Zelenskyy said that the mayor of Melitopol is alive, but he is being tortured. Ivan Fedorov was abducted by Russian invaders from the City Crisis center on March 11. He refused to collaborate with the occupiers

“Belarusian doctors have been threatened with the loss of their job if they are caught spreading information about the dead and injured Russian soldiers.” https://t.co/lwDKvdX3gE

If Putin is systematically exterminating entire villages and cities of ethnic Ukrainians, isn't that genocide?

Isn't Vladimir Putin, and the Russian military, carrying out a campaign of ethnic cleansing fueled by hatred of a neighboring population?

Because– yes, they are.

This, btw, is directly the opposite of what the Russians should be doing according to their doctrine–which is to be fast moving to exploit openings, and adjusting flexibly to the opportunities allowed by battle.

The Russian campaign seems to be being controlled by logistic limitations, severely restricted by Ukrainian attacks on their trucks. Logistics rule because they limit

Ryabkov also said Russia’s list of people in the West, including the US, who will be hit with personal sanctions is ready and will be made public soon.

Ukrainian women are fearless and will beat the daylights out of the enemy. https://t.co/0I51255s3R

Over two weeks in, and Ukraine seems to have stepped up TB2 strikes again. Capability showing remarkable resilience. Probably forces a rethink in many places about survivability and utility of drones in large-scale conventional warfare.

OMINOUS: Ukrainian forces appear to be firing a Grad MLRS from inside a residential area of Kiev.

The war has drawn clear moral lines. Any attempt to understand Russian security interests — or to integrate the country into Europe, economically or otherwise — suddenly appears in Germany as naïveté at best, or as cynical, agenda-driven ignorance of the longstanding imperial plans of Putin at worst.

Putin is also letting himself attack because the American government and the other NATO member states announced in advance that they would not defend Ukraine. The United States does not want to risk a direct confrontation over Ukraine with a nuclear-armed Russia. This reveals Russia’s real security guarantee: not in the neutrality of its neighbours, but the possession of nuclear weapons.

Then there’s the Nazi issue. More than three dozen nationalistic or patriotic “volunteer military formations,” or dobrobaty, have fought against Russia in eastern Ukraine since 2014. Some are the private armies of oligarchs. The defense and interior ministries have taken control of many. And some accept foreign volunteers into their ranks, or are even composed entirely of “foreigners” from former Soviet republics. One of the dobrobaty, the ultranationalist Azov Battalion, had played a decisive role in the liberation of Mariupol in 2014 — and later been accused of having Nazis in its ranks. Because there were. War junkies, white supremacists, fascists: A number of these had found their way to Azov, which resulted in the group being excluded from receiving American arms or aid as the United States ramped up its military support for Ukraine.

Azov’s reputation as a haven for the far-right played well with Russian propaganda aimed at portraying Ukraine as full of Nazis, one of the primary justifications for Putin’s war.

“Putin will not survive the defeat of his army. He gets support because he is perceived to be a strongman; what does he have to offer once he demonstrates incompetence and is stripped of his coercive power?” https://t.co/F636Gwufha

Source: Survey by YouGov, published by the New York Times on March 12.

The partisan gap on Ukraine/Russia has closed. Americans are unanimous in their support of Ukraine and opposition to Putin’s unprovoked and illegal war pic.twitter.com/pqd3QspvnR

Zelensky says he’s proud of Kherson for protesting occupation. “The invaders in Kherson region are trying to repeat The notorious experience of the formation of pseudo republics. Blackmail local leaders, put pressure on deputies. They are trying to organize the so-called ‘KPR.’”

⚡️Foreign Minister Dmytro Kuleba: Russians are trying to organize a sham separatist ‘referendum’ in Kherson, mimicking what they did in eastern Ukraine and Crimea in 2014.

Kherson has been under control of the Russian forces since March 5.

According to the Armed Forces, Ukrainian troops have destroyed 2,593 units of Russian military equipment, including planes, tanks and artillery.

11/ But abandoning a focus on risks, consequences, + outcomes is a guaranteed avenue to bad judgment, and possibly disaster. Falling into this trap out of a very real + legitimate urge to do as much as we can to relieve suffering would not benefit anyone, least of all Ukraine

Here’s a “cumulative” temporal graph that plots tweets (of accounts >10,000 followers) at the time they posted, sized by their follower count. This is the lead up to and the beginning of that Feb 24 spike.

Why they play @TuckerCarlson on Russia State TV:@JuliaDavisNews: Because he sounds like one of the Kremlin pundits. It’s such a perfect alignment they barely edit him, they just air his monologues to show that even in America, people are on Putin’s side.pic.twitter.com/XtNXPLkmfD

The U.S. and other NATO countries sent more than 17,000 antitank weapons, including Javelin missiles, overland to Ukraine via Poland and Romania in the span of less than a week this month, the New York Times reported.
The Javelin has taken on a symbolic valence in pro-Ukraine online chatter. Former reporter Christian Borys created an image of a saint clutching a Javelin and its launch unit. The image on stickers and other gear has raised more than $1 million, Borys said on Twitter, which he said will go to a humanitarian aid charity focused on Ukraine.

“The very information about the presence of Javelins in the weaponry of the Ukrainian Armed Forces causes panic among the [Russian flag] occupiers,” the tweet said.

Ukraine claims that Russia has lost 335 tanks and just over 1,100 armored combat vehicles in the fighting.
But there isn’t reliable data on how many Javelin missiles Ukraine has used in battle and to what effect, said Amael Kotlarski, a senior analyst at Janes, an open-source defense intelligence agency.

Social media has been littered with photos of destroyed Russian tanks with cages. The images have acquired a symbolic resonance so quickly that Internet users have coined the term “cope cage,” earning a page on the Internet’s primary meme directory.

(28)
$19.99 $9.99 (as of May 19, 2022 09:58 GMT -04:00 - More infoProduct prices and availability are accurate as of the date/time indicated and are subject to change. Any price and availability information displayed on [relevant Amazon Site(s), as applicable] at the time of purchase will apply to the purchase of this product.)