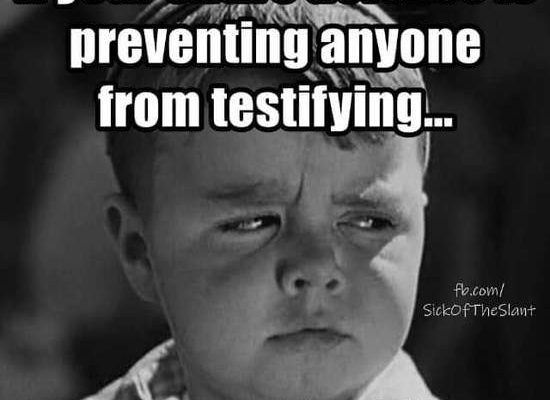 Manufacturing disinformation is important to Trump and the GOP because all that ‘perfection’ isn’t. Greg Sargent demonstrates that even as Trump admitted to shaking down Ukraine, documents need to be doctored to prove something, something. Propaganda is being marshaled against actual fact.

President Trump is now openly calling on his Republican allies to produce doctored transcripts of witness testimony that will exonerate him.

Trump did not put it quite that directly, of course. But given all the known facts — and given everything we’ve seen from Trump over the last few years — there is simply no other way to read them.

It’s hard to imagine that even Trump’s GOP allies would attempt something so spectacularly absurd, and if they did, it’s even harder to imagine it would be successful.

2) When transcripts show that's BS, media has moved on

So this is a nonsensical demand by Trump. In reality, Trump — who has a well documented history of manipulating government resources to prop up his lies — is calling on Republicans to create fake versions of what happened.
But here’s the really important point: Trump and Republicans know they can right now inject the claim into the discussion that the revelations were secretly debunked, because the media coverage won’t return to this, once the transcripts show what nonsense it is. Note how the Times simply allowed Rep. Turner to float that claim, without pointing out its core absurdities.
Indeed, Trump and Republicans also know that once the transcripts are released, they can simply change the subject by lying about what they actually do show. They’ll do this knowing that their propaganda network will amplify those lies, and that all-too-many mainstream outlets will launder them by treating them as merely one side in a legitimate good-faith dispute over the transcripts’ content and meaning.

All Four White House Officials Scheduled To Testify Monday Plan Not To Show Up https://t.co/Ucpvs3UgQH via @TPM

(85800)
$0.00 (as of May 17, 2022 03:05 GMT -04:00 - More infoProduct prices and availability are accurate as of the date/time indicated and are subject to change. Any price and availability information displayed on [relevant Amazon Site(s), as applicable] at the time of purchase will apply to the purchase of this product.)