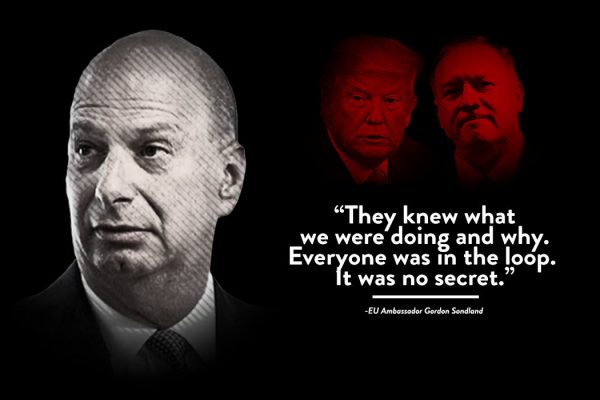 Murkiness and Mulvaney-ness remains as the details of the Ukrainian shakedown gains more factual reality after the release of documents via American Oversight’s FOIA.

The Washington Post reports on the White House scramble to continue explaining the timeline for how Congressional funds were withheld to enforce the bribery solicitation for an investigation of the Bidens.

So it’s fascinating to learn that Trump froze the aid in July and then waited until August before aides started trying to come up with an after-the-fact justification for the hold.

The White House is sensitive to whether their cover-up will be successful, hence an internal review is attempting to get straight what has been a crooked story about the OMB release of military aid and the concurrent whistleblower complaint. Desperately seeking rationalizations, there remains obstruction of witnesses and documents that will affect the articles of impeachment.

Footnote: We need to see the wire transfer date to verify the credible allegation that the aid money was released before 9/9 despite Trump’s “hold.”

A confidential White House review of President Trump’s decision to place a hold on military aid to Ukraine has turned up hundreds of documents that reveal extensive efforts to generate an after-the-fact justification for the decision and a debate over whether the delay was legal, according to three people familiar with the records.

The research by the White House Counsel’s Office, which was triggered by a congressional impeachment inquiry announced in September, includes early August email exchanges between acting chief of staff Mick Mulvaney and White House budget officials seeking to provide an explanation for withholding the funds after the president had already ordered a hold in mid-July on the nearly $400 million in security assistance, according to the three people familiar with the matter who spoke on the condition of anonymity to discuss internal White House deliberations.
One person briefed on the records examination said White House lawyers are expressing concern that the review has turned up some unflattering exchanges and facts that could at a minimum embarrass the president. It’s unclear whether the Mulvaney discussions or other records pose any legal problems for Trump in the impeachment inquiry, but some fear they could pose political problems if revealed publicly.

The hold on the military aid is at the heart of House Democrats’ investigation into whether the president should be removed from office for allegedly trying to pressure Ukraine into investigating his political rivals in exchange for the U.S. support that President Volodymyr Zelensky desperately wanted in the face of Russian military aggression.

The White House released the funding to Ukraine on Sept. 11. The timing has drawn scrutiny because it came two days after the House was formally alerted to a whistleblower complaint, who raised concerns about the call and whether the president was using his public office for personal political gain.
Trump has acknowledged ordering the hold on military aid and also pressing Ukraine’s president to investigate his potential Democratic presidential opponent, Joe Biden, but said the release of the funds was not conditioned on Ukraine launching any investigations.

What cover up? #TrumpLies pic.twitter.com/dNzBUJAslo

(43136)
$0.00 (as of May 20, 2022 01:07 GMT -04:00 - More infoProduct prices and availability are accurate as of the date/time indicated and are subject to change. Any price and availability information displayed on [relevant Amazon Site(s), as applicable] at the time of purchase will apply to the purchase of this product.)