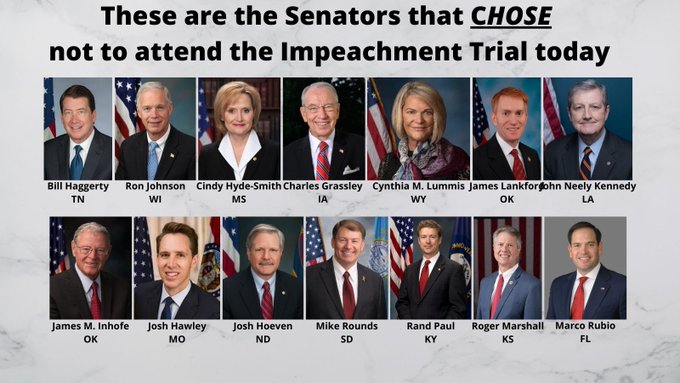 annieli
Apparently Trump may have had nothing to do with the insurrection, according to one of his defense attorneys. Some guy named Grassy Knoll may have done it.

David Schoen floated a strange theory on Sean Hannity's show in defense of the former president.

It’s worth unpacking, because it points in a direction that further incriminates Trump, @ThePlumLineGS writes: https://t.co/qU1YZMJ8tD

Schoen floated a strange theory in defense of the former president. It’s worth unpacking, because it points in a direction that further incriminates Trump. It also underscores what is becoming of the GOP as it prepares to wholly exonerate Trump for attempting to incite the violent overthrow of U.S. democracy.

Schoen appeared to suggest law enforcement might refrain from further investigations into the rioters who stormed the Capitol, because they are showing that the assault was preplanned, supposedly exonerating Trump.

“Right now, you really are finding out about the preplanning,” Schoen told Hannity. “And I’m afraid they’re going to back off that investigation, because maybe — you know — so many people want to tie it to Donald Trump.”
Schoen added that in Monday’s Senate trial presentation, the House impeachment managers showed “nothing” that “ties” the assault to Trump.

The “they” who might “back off” appears to be a reference to law enforcement. If so, the idea that they might stop investigating rioters to avoid exonerating Trump is rank crackpottery.

But more important, whoever the “they” is here, the theory underlying this story is completely divorced from reality — in a way that actually further incriminates Trump.

Denial has become a very long river in Egypt for the GOP. The GQP is now manufacturing more alternative facts(sic).

A year of election misinformation from Trump, amplified on Fox News, visualized. “It was this poisonous snowball of nonsense meant to set the stage for his declaring that Biden hadn’t actually won. And it worked very well.” By @pbump: https://t.co/TeHuLRxYMt pic.twitter.com/znFX3WI6si

He was not alone in this effort. When Trump started talking about fraud or questioning mail-in ballots, so did his allies at Fox News and on the Fox Business Network. When Trump began bashing absentee voting in April, the Fox networks began talking about it more, too. The same thing happened in late May and in August — and after the election, discussion of fraud and mail ballots ballooned on the often Trump-friendly networks.

The central difference, of course, was the focus of the coverage. The show which aired the most segments mentioning fraud after the election by a wide margin was Lou Dobbs’s program on Fox Business — a show which quickly became notorious for credulously amplifying Trump’s fraud claims.
All of this, combined with explicit efforts from other Republicans to treat Trump’s claims as legitimate, built the sense among Republicans that some sort of fraud had occurred. Even today, three-quarters of Republicans falsely believe that there was widespread fraud in the election, according to polling from Quinnipiac University.
What happened on Jan. 6 was an extreme response to that belief. But it’s a belief which was fostered for months before that day.

ICYMI – We found $3.5MIL in direct payments from Trump’s 2020 operation to individuals & firms involved in the 1/6 rallies.

But, thanks to an opaque payment scheme, we may never know the full extent of the campaign’s payments to the event's organizers. https://t.co/CCpsBHLxeA— OpenSecrets.org (@OpenSecretsDC) February 10, 2021