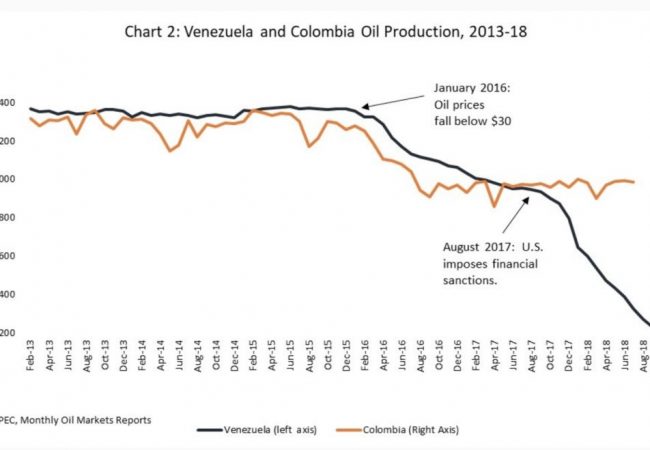 Today Trump tried bait and switch, doing a briefing on the indictments and increased military operations against Venezuela. He used the pretext of a COVID-19 Taskforce to lead with the outlines of a pretext for arresting Maduro as enforcing drug-trafficking indictments.

Apparently Trump still believes he can game the MSM.

Wag-the-dog has never been so obvious, as if a Panamanian-style invasion or even a special operations snatch of Maduro would distract the US from COVID-19 and also re-elect Trump.

But that’s today’s Trumpist mischief. In 2017 there was no mention of Maduro as narco-terrorist, but moving goal posts and failed coup attempts will make anyone trump(sic) up charges.

Even the goal of helping Saudi Arabia and Russia by using such an incursion to raise oil prices would be so obviously corrupt.

MIAMI (AP) — President Donald Trump announced Wednesday that Navy ships are being moved toward Venezuela as his administration beefs up counter-narcotics operations in the Caribbean following a U.S. drug indictment against Nicolás Maduro.

The president’s announcement was a break from the daily White House press briefing to discuss the coronavirus pandemic, which has left much of the country in lock-down and which the government warns could cause 100,000 to 240,000 deaths.

“The Venezuelan people continue to suffer tremendously due to Maduro and his criminal control over the country, and drug traffickers are seizing on this lawlessness,” Defense Secretary Mark Esper said after the president’s announcement.

The mission involves sending additional Navy warships, surveillance aircraft and special forces teams to nearly double the U.S. counter-narcotics capacity in the Western Hemisphere, with forces operating both in the Caribbean and eastern Pacific. Esper said the mission would be supported by 22 partner nations.

“As governments and nations focus on the coronavirus there is a growing threat that cartels, criminals, terrorists and other malign actors will try to exploit the situation for their own gain,” said Trump. “We must not let that happen.”

The enhanced mission has been months in the making but has taken on greater urgency following last week’s indictment of Maduro, Venezuela’s embattled socialist leader, and members of his inner circle and military. They are accused of leading a narcoterrorist conspiracy responsible for smuggling up to 250 metric tons of cocaine a year into the U.S., about half of it by sea.

In August 2017, he [Trump] issued E.O. 13808, which prohibits access to U.S.financial markets by the Venezuelan government,

#Live || The Foreign Minister of Venezuela, @jaarreaza, at a press conference from the #UN: On August 8, 2017, Trump said he did not rule out the use of military force against #Venezuela. He threatened us directly. #PuebloSoberanoYDePaz

Ã¢Â€ÂœThe sanctions are extremely broad and fail to contain sufficient measures to mitigate their impact on the most vulnerable sectors of the population” – UN human rights commissioner Michelle Bachelet on US sanctions on Venezuela https://t.co/JH438cnJuC @rosendo_joe @medialens

“According to…economists @MarkWeisbrot & Jeffrey Sachs, economic sanctions implemented by the Trump administration against #Venezuela since August 2017 have caused tens of thousands of deaths & are rapidly worsening the humanitarian crisis” @HarrySamphir https://t.co/Pd4KwOgBSu

“August 2017, Trump said he was not ruling out “the military option” for Venezuela. When the official was asked if the US might impose a naval blockade or other military action, the response was: “Everything is on the table, all options.”

…leading him in that direction. But thereÃ¢Â€Â™s a lot about this situation that stinks. Venezuela May very well want change, but itÃ¢Â€Â™s hard not to see a lot of foreign actors causing people to suffer, just so non-Venezuelans can profit from it.

More Trumpian firehose tactics now that there aren’t that many days until the election.

The @rand think tank has some advice on dealing with “Fire Hose of Propaganda” https://t.co/77fXhBtqnX

NEW Ã¢Â€Â” Trump is deliberately flooding the zone with his coronavirus briefings. And he has privately mused about how easy it is to get the press to praise his Ã¢Â€Âœnew tone.Ã¢Â€Âhttps://t.co/Vg7IOO6FFh

Via @swin24 and @justinbaragona and me