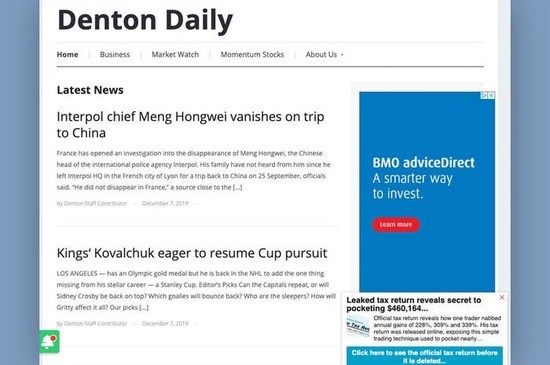 The Trump campaign’s media strategy will more directly address “local news” that at some moment might trade on the same model of Sinclair Broadcasting. Brad Parscale described it as “fighting with the local papers”.

Information spam and the Trump campaign could have much more in common this year, since the role of subcontractors in 2016 has never been thoroughly pursued past the shenanigans with FB ad buys, some from malign entities.

These Fake Local News Sites Have Confused People For Years. We Found Out Who Created Them.

As they stole stories from real newspapers, these sites baffled scientists, activists, and journalists. Until now.

“A crop of news [website] domains were popping up that I’d never heard of before, and they were often publishing directly plagiarized pieces from real outlets,” he told BuzzFeed News.

In addition to being plagiarized, the content flooding his Google Alert results was often at least a year old. Adding to the confusion, it was published on websites that at first glance seemed like legitimate local news sites, with names like the Livingston Ledger, Denton Daily, and Hoback Herald. They also noticed another set of financial news sites doing the same thing, with names like Stock Daily Dish and Daily Stock Dish.

People who caught the sites plagiarizing began speculating about the motivations of whoever was running them. One person noticed that their Google Alerts for Julian Assange were flooded with results from the sites, leading them to warn that “cyber marketing tools are being used in the propaganda war against #WikiLeaks.” One researcher labeled the network of sites “a malicious information operation masquerading as a news aggregator.”

Neither was the case. In fact, the plagiarized sites are part of an operation run by a North Carolina man with a background in the financial information industry. And the motivation is simple: money.

A BuzzFeed News investigation has identified a network of roughly 100 sites dating back to at least 2015 that have been plagiarizing stories from major news organizations, masquerading as local news and financial outlets, and manipulating Google News and search results to earn money through ads, through financial email subscriptions, or by referring people to dubious investments.

Domain registration records and other information, including confirmation from a business partner, show that the network is run by Matt McGorty. His brother Tim, who also worked in the financial information industry, is linked to the network via domain registrations, but his role is unclear. The McGortys did not respond to multiple interview requests and a detailed set of questions.

2016 a story about shared datasets has yet to be written www.wired.com/…

“In conversations with political strategists and other experts, a dystopian picture of the general election comes into view—one shaped by coordinated bot attacks, Potemkin local-news sites, micro-targeted fearmongering, and anonymous mass texting.”

“As the president’s reelection machine ramps up, Democratic strategists have found themselves debating an urgent question: Can they defeat the Trump coalition without adopting its tactics?”

A top Trump strategist says he plans to erode people's trust in local media by November.
“We can actually build up and fight with the local newspapers," Brad Parscale said.https://t.co/5zKVBLfz0N

Read: Peter Pomerantsev on Russia and the menace of unreality

In the United States, we tend to view such tools of oppression as the faraway problems of more fragile democracies. But the people working to reelect Trump understand the power of these tactics. They may use gentler terminology—muddy the waters; alternative facts—but they’re building a machine designed to exploit their own sprawling disinformation architecture.

Central to that effort is the campaign’s use of micro-targeting—the process of slicing up the electorate into distinct niches and then appealing to them with precisely tailored digital messages. The advantages of this approach are obvious: An ad that calls for defunding Planned Parenthood might get a mixed response from a large national audience, but serve it directly via Facebook to 800 Roman Catholic women in Dubuque, Iowa, and its reception will be much more positive. If candidates once had to shout their campaign promises from a soapbox, micro-targeting allows them to sidle up to millions of voters and whisper personalized messages in their ear.

It doesn’t require an overactive imagination to envision a worst-case scenario: On Election Day, anonymous text messages direct voters to the wrong polling locations, or maybe even circulate rumors of security threats. Deepfakes of the Democratic nominee using racial slurs crop up faster than social-media platforms can remove them. As news outlets scramble to correct the inaccuracies, hordes of Twitter bots respond by smearing and threatening reporters. Meanwhile, the Trump campaign has spent the final days of the race pumping out Facebook ads at such a high rate that no one can keep track of what they’re injecting into the bloodstream.
After the first round of exit polls is released, a mysteriously sourced video surfaces purporting to show undocumented immigrants at the ballot box. Trump begins retweeting rumors of voter fraud and suggests that Immigration and Customs Enforcement officers should be dispatched to polling stations. are illegals stealing the election? reads the Fox News chyron. are russians behind false videos? demands MSNBC.
www.theatlantic.com/…

These efforts may not come only from abroad: A group of former Cambridge Analytica employees have formed a new firm that, according to the Associated Press, is working with the Trump campaign. (The firm has denied this, and a campaign spokesperson declined to comment.)

After the Cambridge Analytica scandal broke, Facebook was excoriated for its mishandling of user data and complicity in the viral spread of fake news. Mark Zuckerberg promised to do better, and rolled out a flurry of reforms. But then, last fall, he handed a major victory to lying politicians: Candidates, he said, would be allowed to continue running false ads on Facebook. (Commercial advertisers, by contrast, are subject to fact-checking.) In a speech at Georgetown University, the CEO argued that his company shouldn’t be responsible for arbitrating political speech, and that because political ads already receive so much scrutiny, candidates who choose to lie will be held accountable by journalists and watchdogs.

Parscale has indicated that he plans to open up a new front in this war: local news. Last year, he said the campaign intends to train “swarms of surrogates” to undermine negative coverage from local TV stations and newspapers. Polls have long found that Americans across the political spectrum trust local news more than national media. If the campaign has its way, that trust will be eroded by November. “We can actually build up and fight with the local newspapers,” Parscale told donors, according to a recording provided by The Palm Beach Post. “So we’re not just fighting on Fox News, CNN, and MSNBC with the same 700,000 people watching every day.”

Running parallel to this effort, some conservatives have been experimenting with a scheme to exploit the credibility of local journalism. Over the past few years, hundreds of websites with innocuous-sounding names like the Arizona Monitor and The Kalamazoo Times have begun popping up. At first glance, they look like regular publications, complete with community notices and coverage of schools. But look closer and you’ll find that there are often no mastheads, few if any bylines, and no addresses for local offices. Many of them are organs of Republican lobbying groups; others belong to a mysterious company called Locality Labs, which is run by a conservative activist in Illinois. Readers are given no indication that these sites have political agendas—which is precisely what makes them valuable.

According to one longtime strategist, candidates looking to plant a negative story about an opponent can pay to have their desired headlines posted on some of these Potemkin news sites. By working through a third-party consulting firm—instead of paying the sites directly—candidates are able to obscure their involvement in the scheme when they file expenditures to the Federal Election Commission. Even if the stories don’t fool savvy readers, the headlines are convincing enough to be flashed across the screen in a campaign commercial or slipped into fundraising emails.

(28)
$19.99 $9.99 (as of May 19, 2022 02:12 GMT -04:00 - More infoProduct prices and availability are accurate as of the date/time indicated and are subject to change. Any price and availability information displayed on [relevant Amazon Site(s), as applicable] at the time of purchase will apply to the purchase of this product.)