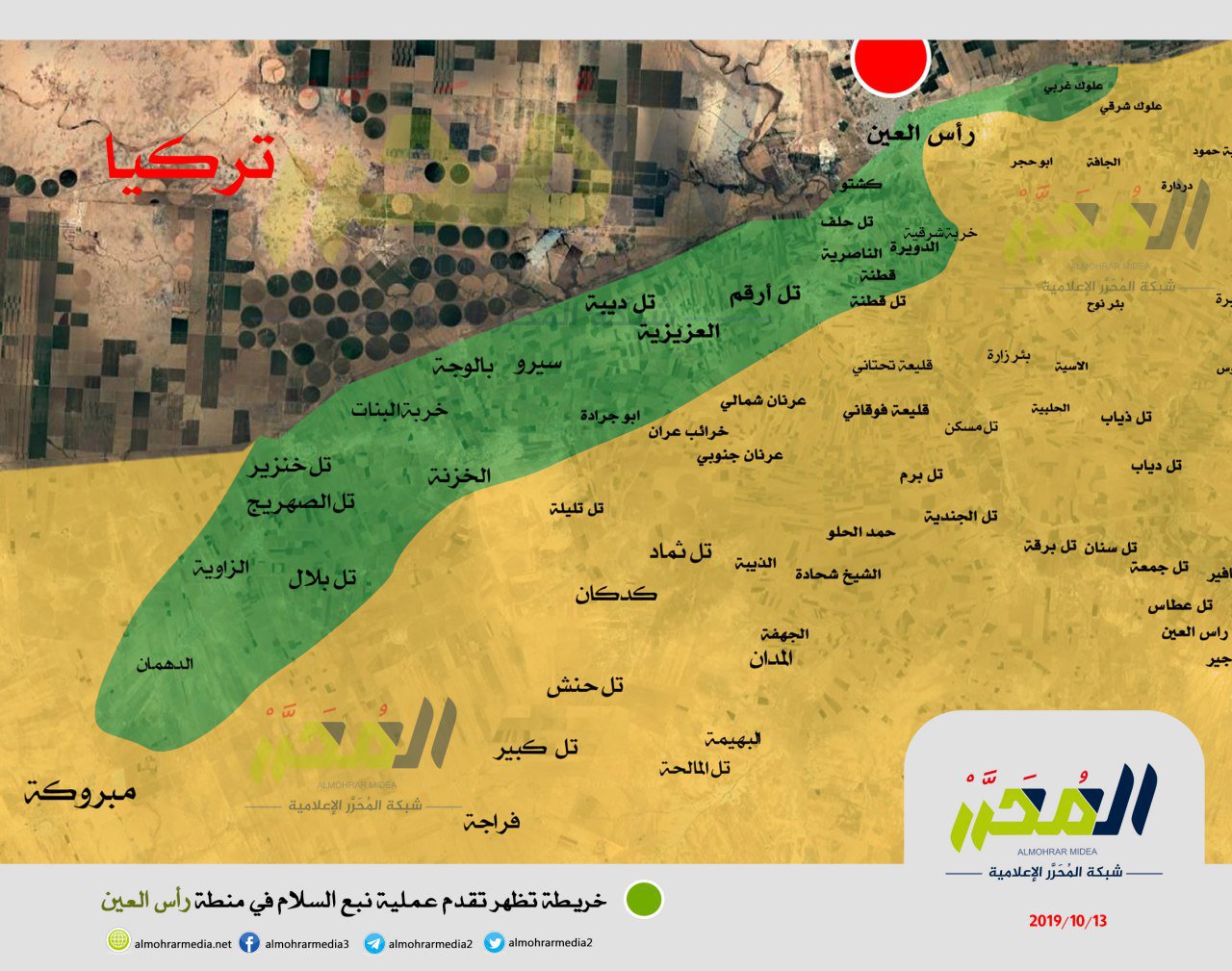 This debacle continues as Trump claims he’s in favor of world peace, likely because he “lost” the Nobel prize to someone who brokered actual peace. Even more likely is that Trump’s holdings in Turkey were threatened and he was given a signal that this withdrawal would be favorable to Putin.

This is shaping up as most chaotic US withdrawal from region. Rivals hurrying to collect the spoils.

With Assad deal with Kurds, a Turkey- Syria regime battle in horizon.

Russia role on the rise as Trump packs and leaves

Kurdish forces just called for Syrian army to take control of Turkish border. Looks like the end of the Kurds mini-state protected by the United States.

What's happening in Syria tonight above all represents a massive failure of US diplomacy. The US kept troops there to leverage US influence in peace negotiations to secure US goals. Now they're leaving in disarray & the opposite is happening – Iran & Russia are moving in.

US official tells @npwcnn that the campaign to defeat ISIS in Syria is “over for now” and that ISIS “has a second lease on life with nearly 100,000 [people] who will re-join their jihad.”

2/ More Allen: "There was no chance Erdogan would keep his promise, and full blown ethnic cleansing is underway by Turkish-supported militias. This is what happens when Trump follows his instincts and because of his alignment with autocrats.

And this is why House needs to see those Trump tax returns. Trump has green-lit a new Middle Eastern war by a dictator who controls some unknown percent of Trump's global licensing income. We cannot begin to assess US Middle East policy without knowing who's paying what to Trump

I've spoken to hundreds of Trump supporters over the past three years. One of the reasons they say they support him is because he is doing something about ISIS… https://t.co/OeDRrcs1lr

New Trumpist talking point: the only way to stop Turkey massacre of Kurds is to go to war against Turkey. But Turkey never believed that: that’s why they asked Trump’s permission to invade. All he had to do was say No. He said Yes. Why? All the plausible answers are corrupt

1/ I *think* this is a hugely important story that's yet to be excavated. Please let me know if anyone's gotten to the bottom of it.@juliettekayyem @just_security @lawfareblog

Many or most of Trump's closest advisors in NSC/DoD/State/etc. have been warning him for years …

2/ … that he shouldn’t withdraw the 50-150 US troops from the Syrian border because it would betray our allies, lead to their slaughter, empower Russia in Syria, risk release of many ISIL detainees, allow Turkey to breach the UN Charter w/impunity, and more. (cont.)
3/ Yet following his call w/Erdogan, Trump (presumably) directed DoD to order those troops withdrawn, which led to precisely the calamity he’d been warned about. Do we yet know the answers to these key questions?:
4/ i. *Why* did he do it? (He hasn’t given a remotely plausible account yet publicly.)

ii. What did the high-ranking DoD officers (and NSC officials, etc.) say to him when he called them and told them to issue the order? Did they try to talk him out of it? (cont.)

5/ If so, did he explain why he was refusing to back down? If so, was his explanation at all coherent?

iii. What, if anything, can be done now, esp. in terms of force deployment, to limit the consequences of this inexplicable, disastrous decision? And if Trump won’t do it …

6/ … are super-majorities of Congress prepared to enact a statute requiring him to do so?
7/ iii. Oh, and also: When if ever will we (or Congress) see the transcripts of his conversations w/Erdogan and Putin?
8/ NOTE: I can speculate about the answers, as can all of you. What I’m looking for is actual reporting w/reliable sources.

Is there a “rough transcript” of Trump’s phone call with Erdogan that is somewhere on a secret server? What was said between the two men which has led to the devastating destabilizing destruction in #Syria? How unrelentelessly galling Trump invites the ethnic cleanser to the WH.

Just gave my resignation to the Bangkok Post 30 minutes ago . 3 cartoons about China & Turkey submitted this week , none published. Apparently it's very important not to insult the Turks who are massacring the Kurds @PravitR @CartooningPeace @plantu @CRNetInt @suranand @FCCThai pic.twitter.com/keYliHWUri

How cynical would it be for Trump to lift sanctions on Russia to oppose (_____).

And it looks like @LindseyGrahamSC has gotten @realDonaldTrump on board. Appears likely to be a veto proof majority regardless but Trump doesn’t appear to be fighting Graham. https://t.co/iGEJ8k8G6t