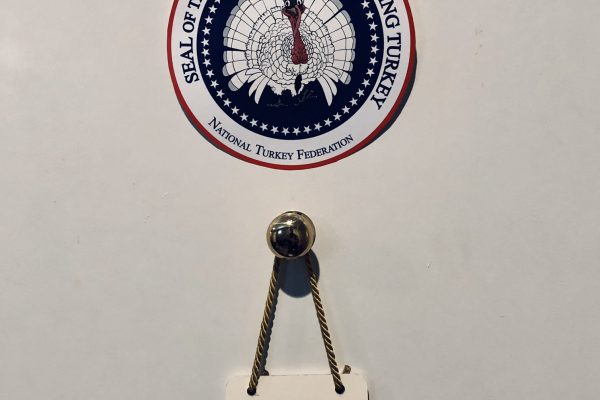 Tuesday at the WH is turkey pardon day. It's between "Bread" & "Butter," two rotund gobblers, spending their last night at a luxury DC hotel (not Trump's). Then, @POTUS heads to Florida for a "homecoming rally" marking his changing his official state of residence from NY to FL. pic.twitter.com/mfZHkgrjgB

In (way) other news, the official White House turkeys have arrived. They’re staying @WillardHotel. Their names will be revealed tomorrow and on Tuesday @realDonaldTrump will do the pardon. pic.twitter.com/J2aAWzRrR6

WASHINGTON (The Borowitz Report)—In a startling break with Thanksgiving tradition, Donald J. Trump refused to pardon the White House turkey after claiming that it was working as a secret operative of the billionaire George Soros.

A group of fourth graders from Bethesda, Maryland, who had gathered on the White House lawn for the annual turkey-pardoning ceremony appeared unprepared for the anti-Soros outburst that Trump unleashed on the Thanksgiving bird.

“That turkey was sent by Soros to spy on me,” Trump said, angrily turning on the fowl. “A lot of people are saying this.”

Two weeks ago Sen. Lindsey Graham went from a White House meeting with Donald Trump and Turkish President Recep Tayyip Erdogan to the floor of the United States Senate to hastily block a bipartisan resolution formally recognizing Turkey’s genocide against Armenians just over 100 years ago.

(85484)
$0.00 (as of May 15, 2022 23:57 GMT -04:00 - More infoProduct prices and availability are accurate as of the date/time indicated and are subject to change. Any price and availability information displayed on [relevant Amazon Site(s), as applicable] at the time of purchase will apply to the purchase of this product.)