When bandoleers of soup are outlawed only outlaws will become soup antifa.

Trump in July: And you have people coming over with bags of soup and the anarchists… start throwing it at our cops… And if it hits you, that’s worse than a brick because that’s got force… And when they get caught, they say, “No, this is just soup for my family.” pic.twitter.com/xs9tcY9aA5

Trump in a meeting with the National Association of Police Organizations reviews a large cache of seized soup and other edible weapons. pic.twitter.com/pc3Ir7a0E5

And it's not just clear broths and noodle soups. Some of them are using creamy soups and even stews to commit their atrocities! https://t.co/VI0zJmB7u6

“The dogmas of the quiet past are inadequate the stormy present.” – Lincoln

“They slipped the surly bonds of earth and touched the face of God.” – Reagan

“They throw the cans of soup. That’s better than a brick because you you can’t throw a brick, it’s too heavy.” – Trump

Follow-up questions to Trump about the shadowy thugs who came out of the shadows to get on a plane:

“A can of soup hurts more than a brick because it has force.”

A Can of Soup (16N if thrown like a baseball by a pro pitcher) vs A Brick (20N if thrown by a strong dude):

Trump doesn't know what he's talking about there. Force = Mass * Acceleration… This is EASY to figure out. Weight in kg of object, approx. how fast a human can throw it pic.twitter.com/urO3FX9bq7

The United States Of America 2020 in one tweet: pic.twitter.com/5nzy9saxhM 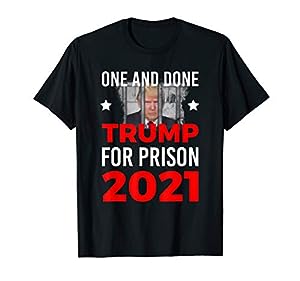 One and Done Trump for Prison 2021 T-Shirt