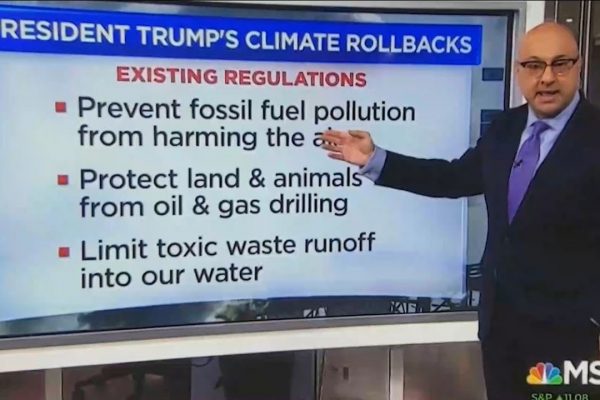 President Trump has reversed many regulations. We all know there were purposes for each of these regulations. Interestingly, the people hurt more are those who voted him into office.

The majority of the Trump voters affected by his irresponsible deregulation do not have the options of those affected. They are the ones that will get illnesses caused by the President’s irresponsibility.

The Brookings Institution has a tracker that details all the rollbacks during the Trump administration.

The Trump administration has major deregulatory ambitions. But how much deregulation is actually happening? This tracker helps you monitor a selection of delayed, repealed, and new rules, notable guidance and policy revocations, and important court battles across eight major categories, including environmental, health, labor, and more. For a more thorough explanation of the tracker, including guidance on how to use its interactive features and an explanation of how entries are selected, click here. Sign up here to subscribe to the newsletter, which will include select updates from the Deregulatory Tracker as well as new research from the Center on Regulation and Markets.

Whether you support or oppose ongoing regulatory changes, Americans have the right to participate in the regulatory process and to comment on these proposed rules. Read more on here on how to submit the most effective comments on proposed regulations.

Ali Velshi and his team at MSNBC must be commended. While most networks and segments concentrate on impeachment, the mundane, or on issues to deflect Americans from issues that really matter, every so often Velshi, a real journalist, gets real informative.

(22196)
$179.00 (as of May 17, 2022 04:37 GMT -04:00 - More infoProduct prices and availability are accurate as of the date/time indicated and are subject to change. Any price and availability information displayed on [relevant Amazon Site(s), as applicable] at the time of purchase will apply to the purchase of this product.)