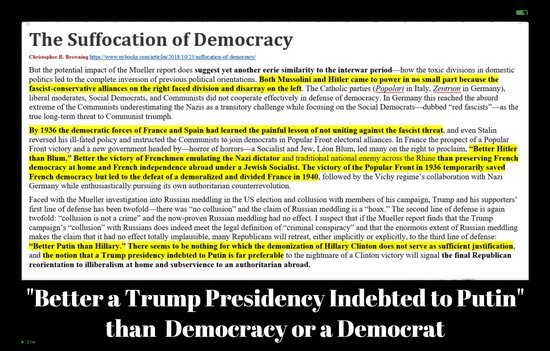 Excellent article in The Atlantic on the current regime. Collars of color go to jail as “Americans aren't practicing democracy anymore”

The underlying principle here, from Stone to Iran-Contra, is authoritarian but consistent: Members of the ruling clique are entitled to criticize law enforcement without sanction, and entitled to leniency when they commit crimes on the boss’s behalf. Everyone else is entitled to kneel.

Authoritarian nations come in many different stripes, but they all share a fundamental characteristic: The people who live in them are not allowed to freely choose their own leaders. This is why Republican Senator Mitt Romney of Utah, in his speech announcing his vote to convict on the first article of impeachment, said that “corrupting an election to keep oneself in office is perhaps the most abusive and destructive violation of one’s oath of office that I can imagine.”

Democracies are sustained through the formal process by which power is contested and exchanged. Once that process is corrupted, you have merely the trappings of democracy within an authoritarian regime. Such governments may retain elections and courts and legislatures, but those institutions have no power to enforce the rule of law. America is not there yet—but the acquittal vote was a fateful step in that direction.

The process by which a democracy becomes an authoritarian regime is what social scientists call authoritarianization. The process does not need to be sudden and dramatic. Often, democratic mechanisms are eroded over a period of months or years, slowly degrading the ability of the public to choose its leaders or hold them to account.

Legislators in functioning democracies need not agree on substantive policy matters—they might fight over environmental safeguards, for example, or tax rates, or immigration, or health care. But no matter the party or ideology they support, they must hold sacred the right of the people to choose their own leaders. The entire Senate Republican Conference has only one legislator willing to act on that principle. The lesson Trump has learned from impeachment is that the Republican Party will let him get away with anything he wants to do.

This @AdamSerwer essay is clear-eyed and perfectly accurate. The truly worrying thing about it, from my perspective, is the hesitancy of the media and the Democratic Party to directly confront the fact that we're now well down the authoritarian slope. https://t.co/zbbFCJqePc

Democratic backsliding can be arrested. But that is an arduous task, and a Trump defeat in November is a necessary but not sufficient step. Many Americans have doubtless failed to recognize what has occurred, or how quickly the nation is hurtling toward a state of unfreedom that may prove impossible to reverse. How long the Trump administration lasts should be up to the American people to decide. But this president would never risk allowing them to freely make such a choice. The Republican Party has shown that nothing would cause it to restrain the president, and so he has no reason to restrain himself.

Media: @eliehonig to @BrookeBCNN: “Today was a good day for @TheJusticeDept, bad day for Barr … You have @realDonaldTrump out there tweeting again *during the sentencing hearing*, undercutting Barr again, exactly what Barr said stop doing … What's Bill Barr going to do now?” pic.twitter.com/5061hOh0Kj

“The truth still exists, the truth still matters. Roger Stone's insistence that it doesn't, his belligerence, his pride in his own lies are a threat to our most fundamental institutions, to the very foundation of our democracyÃ¢Â€Â

Pardons can be used to right a wrong, or show mercy to the repentant.

Instead, Trump pardons Fox News guests, the wealthy and well-connected,

And those convicted of the same serious crimes his associates are accused of.

This is why Trump's and McConnell's stuffing the courts with rightwing judges is so dangerous. A “Trump” judge might rule that those conditions were OK. https://t.co/OjRNQUBYQT

(22448)
$179.00 (as of May 21, 2022 07:13 GMT -04:00 - More infoProduct prices and availability are accurate as of the date/time indicated and are subject to change. Any price and availability information displayed on [relevant Amazon Site(s), as applicable] at the time of purchase will apply to the purchase of this product.)