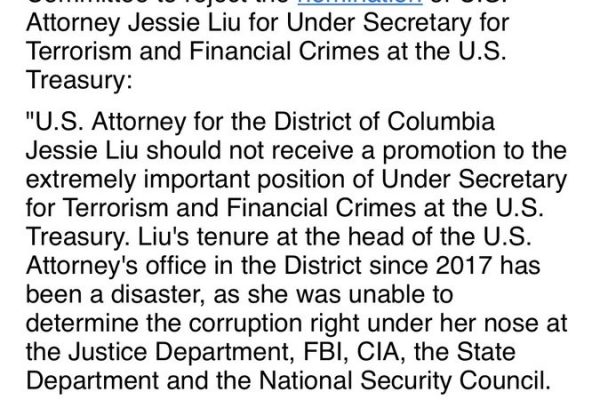 The cover-up continues as shenanigans abound. Jessie Liu is a PoC Republican, including service on the transition committee, but she might know too much about things like the Michael Flynn and Erik Prince prosecutions, as well as the Roger Stone case.

MORE: Per a source familiar, Liu was expecting to stay in her position as U.S. attorney through at least her hearing if not her confirmation. But then, unexpectedly, was informed that AG Barr was replacing her w Shea. Today, Trump withdrew her nomination. https://t.co/ikeGefjpmh— Jonathan Swan (@jonathanvswan) February 12, 2020

President Trump is withdrawing his nomination for former U.S. attorney for D.C. Jessie Liu to serve as the Treasury Department's undersecretary for terrorism and financial crimes, a top position overseeing economic sanctions, according to two sources with direct knowledge.

The big picture: Liu was confirmed in September 2017 to lead the largest U.S. attorney's office in the country, overseeing a number of politically charged prosecutions that included the case against Trump associates Roger Stone, Michael Flynn, Paul Manafort and other spinoffs from the Mueller investigation.

Behind the scenes: This was “the president's call,” according to a former administration official familiar with the situation. The decision, which was made today, has administration officials questioning the circumstances that led to Trump changing his mind — with the developments in the Roger Stone case today being the only possible one they are aware of.

Last March, Liu was up for the 3rd highest post at DOJ and withdrew from consideration after opposition from Senate GOP. Then, she remained as USAO for D.C. Now, Timothy Shea has already taken her place https://t.co/7SHySeissc https://t.co/xIisNmS1u3— Rachel Kurzius (@Curious_Kurz) February 12, 2020

My latest with @pkcapitol on an emboldened president and a Senate feeling powerless to rein him inhttps://t.co/I9EQ8LKBP0— Philip Rucker (@PhilipRucker) February 11, 2020

Impeachment is like duct tape. If itÃ¢Â€Â™s itÃ¢Â€Â™s not working youÃ¢Â€Â™re not impeaching enough.

Ã¢Â€Â” inspirational credit to The Rock, in Skyscraper.