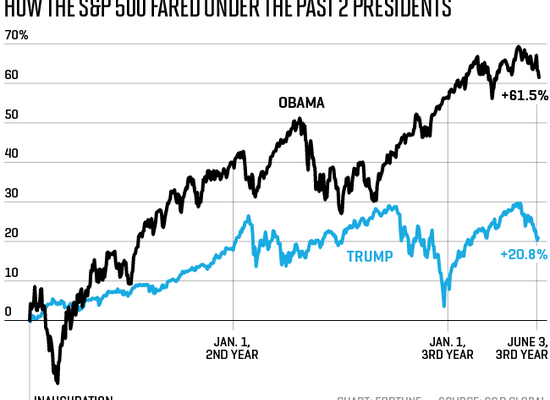 annieli
How so tried are we of the crap coming from the Orange Emperor IMPOTUS.

As the House voted on articles of impeachment against President Trump this week, US stocks climbed despite the President’s warning that “they would crash.”

If they actually did this the markets would crash. Do you think it was luck that got us to the best Stock Market and Economy in our history. It wasnÃ¢Â€Â™t! https://t.co/V0WGVWEWTN

According to a report from CNBC this Thursday, the S&P 500 shot up nearly 7% after House Speaker Nancy Pelosi formally announced the impeachment inquiry into Trump.

All of this impeachment nonsense, which is going nowhere, is driving the Stock Market, and your 401KÃ¢Â€Â™s, down. But that is exactly what the Democrats want to do. They are willing to hurt the Country, with only the 2020 Election in mind!

But it’s not as impressive as its performance during the equivalent period under Obama. Under Obama, the Dow increased from 7,949.1 to 10,572 — a rise of 33 percent.

In fact, the Dow’s rise was even more impressive under Obama if you start measuring at the market’s low point, on March 9, 2009, during the depths of the Great Recession. That day, the Dow closed at 6,547. Between then and Jan. 5 — a 10-month period — the Dow rose by a stunning 61 percent. That’s more than three times faster than Trump’s rise over the same period in his term.

actually it's your trade war, ballooning deficits and destroying the health care market that is impacting the markets.

If Federal Reserve printing excess money, lowering interest rates (artificial inflation) after you threw tantrums on Twitter is “luck” than the recession, stock market depression to follow will lead to financial suicides but your lucky followers don't live in reality so who cares

Ballooning debt deficits from crippling trade wars, and government bailouts are not signs of a thriving economy but one on a trend to the next recession. Stock markets don't reflect the strength or the actual economy. We still have less job growth than under Obama.