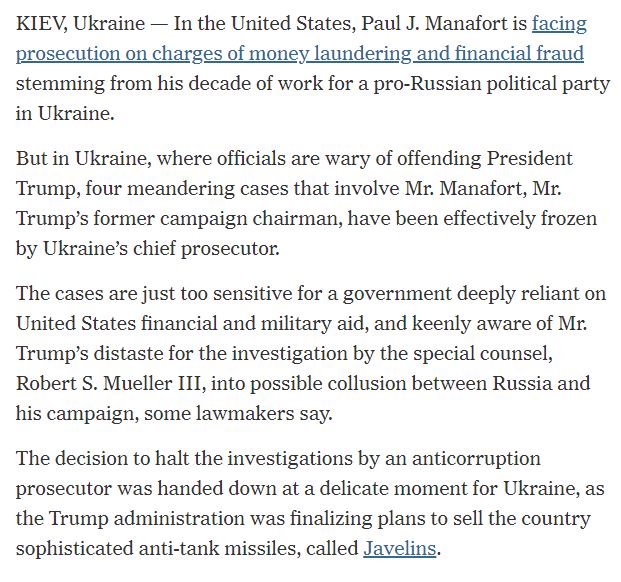 It’s a fast-moving day and a press conference was scheduled for 4pm. Trump’s last such presser at the UNGA was “free-wheeling” so the cray-cray might be especially wild.

Chances are that the GOP members of House/Senate Intel committees need to leak the complaint contents to the WH, which may explain the delay in starting the presser.

Trump whines about lack of media coverage of other activities. Trump repeats some GOP talking points (as accidentally leaked to Democrats) e.g. “second-tier”. Bidens mentioned. Mentions Zelensky. Trump: “I didn’t do it, I didn’t threaten anyone”

Presidents donÃ¢Â€Â™t have a filibuster but Trump is filibustering his U.N. news conferenceÃ¢Â€Â” announcing how great he and his presidency are! The man is showing his weakness!Ã¢Â€Â” John Dean (@JohnWDean) September 25, 2019

Tries to claim that some members of Congress threatened Ukraine. Claims WaPo reports “a lie” about acting DNI head McGuire threatening to resign. Daniel Dale might be commenting on the fact checking as Trump brags about trillions of dollars relative to China trade.

Quotes and fact checks on TrumpÃ¢Â€Â™s press conference will be in this thread.

The whistle-blower complaint has arrived at Congress.

The whistle-blower complaint that ignited the impeachment drive will be sent to Congress this afternoon after days of administration resistance.

BREAKING: The Senate has voted 54-41 to terminate President TrumpÃ¢Â€Â™s declaration of a national emergency at the southern border and to stop the diversion of military funds to pay for a wall along the border.
Story to come for @CourthouseNews

Trump ends the press conference by saying Pelosi is no longer the Speaker of the House.

Here's Trump urging the Ukrainian president to investigate Biden right out in the open, on camera. Totally shameless. pic.twitter.com/Alku4LayT4

I warned the #Ukraine call transcript would unleash a torrent of gaslighting. It has.

Trump just claimed Zelensky said “NO PRESSURE.” That's false. Z finessed it. But Trump has now put those words in Z's mouth. And pro-Trump media & propagandists will repeat the lie as truth.Ã°ÂŸÂ™Âƒ https://t.co/8L1AMvNC3L

Why would Trump release a smoking gun?

1. He can't recognize his own corruption.
2. He believes he can con you into not seeing it.
3. He actually believes his own lies.

Rhetorical question – am I the only American that thinks itÃ¢Â€Â™s odd that the Russian GovernmentÃ¢Â€Â™s Ã¢Â€Âœread outsÃ¢Â€Â are far more comprehensive then what little the Trump White House or Dept of State furnishes us? pic.twitter.com/Kly9rigxL1

This is an enormous mistake.

Ukraine is directly related to many of the other impeachment issues. https://t.co/Ss3n08QKDA

Every time someone tweets Ã¢Â€ÂœClinton got impeached for lying about a blow job,Ã¢Â€Â I think: Ã¢Â€ÂœWait… trump did THAT TOO!!Ã¢Â€Â

(51660)
$17.62 (as of May 22, 2022 03:04 GMT -04:00 - More infoProduct prices and availability are accurate as of the date/time indicated and are subject to change. Any price and availability information displayed on [relevant Amazon Site(s), as applicable] at the time of purchase will apply to the purchase of this product.)