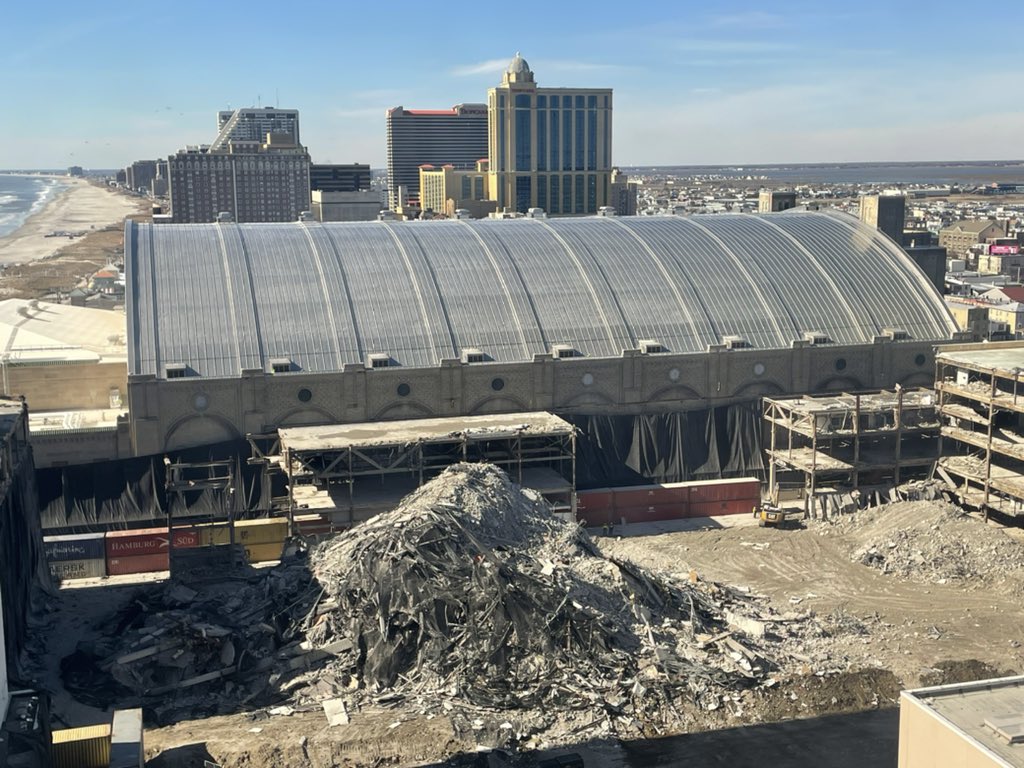 Rush Limbaugh was more of a conservative index and perhaps a reactionary icon. He claimed whenever cornered with a political lie that he was an entertainer rather than any credible media source. “Rush Rooms”  everywhere should be festooned with black crepe.

This is a metaphor for Trump’s presidency.

Everything he touches crumbles to dust.

When Donald Trump owned it, he once tried to use eminent domain to kick a widow out of her house. He wanted her property as a limo parking lot. Spoiler alert: He failed.

He also tried to pull a slippery move by hiring away the widow’s lawyer in the middle of a legal dispute over the eminent domain effort. Spoiler alert: He failed https://t.co/NDGj78ByHE

He’d met two people who seemed as stubborn as he: a feisty widow whose house stood in the way of his Atlantic City casino expansion, and her attorney.

Trump’s approach struck his adversaries as brazen. Even though the widow was suing him for damaging her house, Trump called her attorney, Glenn Zeitz, and, according to Zeitz, tried to hire him for a potentially more lucrative case.

Zeitz rejected the offer, which came as Trump was also pressing him to settle the dispute and persuade his client to sell her house. Zeitz said he couldn’t fight Trump in one case and represent him in another. It would have created “a tangled web of conflicts,” Zeitz said in a recent interview.

“It was like, ‘Wow!’ Just bizarre. The audacity,” recalled Julia Ingersoll, an associate in Zeitz’s office and one of five friends and former colleagues who learned of the call at the time and confirmed it in recent interviews. “It’s like, if we can’t beat you, we’ll buy you.”

After the past 4 years, who needs subtle metaphors any more? https://t.co/tFyGtNxBpO

….Here are some facts about the casino.

• The property opened as Harrah's at Trump Plaza on May 14, 1984.
•  It closed for good Sept. 16, 2014, one of four casinos in Atlantic City to close that year.
• Donald Trump himself was no longer an owner at the time of its closure.
• Billionaire Carl Icahn assumed ownership of Trump’s former casino company from bankruptcy court in 2016.
• The 10.5-acre property where the Plaza sits is owned by billionaire Carl Icahn.
• The property sits at the center of the Boardwalk, at the foot of the Atlantic City Expressway.
[…]
• Bids reached as high as $175,000 to push the detonation button, but the auction was cancelled following a lawsuit.
• The Trump Plaza was one of three casinos in Atlantic City with the Trump name.
• During its heyday, the Plaza hosted Mike Tyson fights, WrestleMania IV and V.
• The former casino once housed over 80 table games and 2,000 slot machines.
• Mayor Marty Small says demolition has nothing to do with politics, as the building has been closed since 2014.
• Donald Trump lost a legal battle in effort to build a parking area over a home of a widowed mother of 5.
• The Plaza sits at Boardwalk and Mississippi Avenue.
• The Plaza stands at 321 feet tall, with 32 floors overlooking the Atlantic Ocean.
• The last game ever played in the casino was a game of Blackjack on September 26, 2014.
newjersey.news12.com/…
x

On Wednesday morning, 3,000 pieces of dynamite sent the 34 stories of Trump Plaza Hotel and Casino in Atlantic City crashing to the ground. pic.twitter.com/GqWXcmocjw