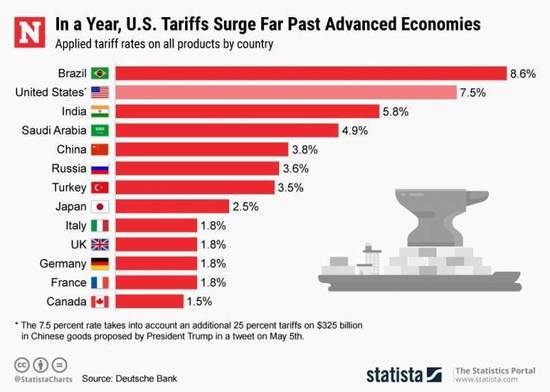 Trump is losing his trade war and what’s worse is that he’s clueless about the reason for the losing. The prevailing truth is that stupidity has given way to irrationality. “The truth, however, is that there has seldom been clearer proof that Trump is in fact the world’s worst negotiator. And the price Americans are paying for his weakness keeps getting higher.” Any claims he’s made for improving the economy are either positive residuals from the Obama era or as overblown as his 13,000 lies and falsehoods since taking office.

….Douglas Irwin, author of “Clashing Over Commerce: A History of U.S. Trade Policy,” … argues the most accurate comparison from an American perspective is the War of 1812.

Once the war was won, it prompted calls for a decoupling from a British economy with which America’s was deeply integrated, Irwin said. And like the current calls related to China, that was based on a bigger existential question for the U.S.

“We wanted to reduce our dependence on Britain, which was viewed as an enemy power,’’ said Irwin, a professor at Dartmouth.

In response, Washington began imposing higher tariffs on British goods to protect what it declared to be strategic U.S. industries. That action grew into manufacturers’ calls for protection from cheap British imports that would become a feature of political debate through the 19th century.

Trump's trade war might have something in common with the War of 1812 https://t.co/3MpAK8h8EL

It started with a carefully calibrated trade weapon, an algorithm that spat out a list of targets for an assault on China ordered up by a U.S. president determined to rebalance the relationship between the world’s two biggest economies. The goal: building leverage for negotiations aimed at forcing wholesale changes in China’s economic architecture while limiting the pain to businesses and consumers at home. “We’ve given this an enormous amount of thought,” Robert Lighthizer, the U.S. trade representative, told senators in March 2018, highlighting the work of the computer model his team had constructed. “It’s a sensible, moderate, appropriate amount,” he went on, “and it is calculated and created in a very businesslike, sensible way.”

The algorithm produced a 28-page list of Chinese-made products, including aircraft tires, pacemakers, and printed circuit boards, whose total value—$34 billion—matched an estimate of the annual cost to U.S. businesses of Chinese intellectual-property theft and forced technology transfers. The more than 800 items on the list were selected for their potential to inflict pain on industries Beijing has designated as strategically important while taking into account the potential disruption to U.S. supply chains. Adding to the complexity, the task was to throttle back China’s imports without American consumers taking notice or endangering President Donald Trump’s promised economic boom.

The model, though, didn’t account for the unpredictability of Trump. Behind closed doors, the president took the modest number—equal to 7% of the $505 billion in goods the U.S. imported from China in 2017—almost as an affront. He didn’t want moderate or appropriate. He grumbled to aides the figure was too low and demanded it be rounded up to at least $50 billion. Trump also asked his staff, almost as an aside: “Do you think I should put tariffs on everything from China?”

Twenty months later, what began as method now looks more and more like madness. A tit-for-tat tariff war has ensnared more than 70% of bilateral trade in goods and raised the specter of a decoupling of two economies that once seemed destined to become progressively more intertwined. If the countries can’t resolve at least some of their differences in the coming weeks, the White House will on Dec. 15 add 15% punitive tariffs on a further $160 billion in Chinese imports, delivering on what were once just presidential ruminations. That tariff round could jeopardize America’s record-long expansion, according to some economists. As it stands, the existing duties will knock 0.8% off global growth in 2020, according to recent forecasts from the International Monetary Fund.

Trump’s theory of negotiation lacks nuance or subtlety, as his Ukraine shakedown has revealed.

What we see is that Trump is both ignorant and incompetent when it comes to wielding power. The idea that people or nations can work together in a way that provides leverage during negotiations is completely at odds with his pattern of threats from afar, followed by capitulation in face-to-face meetings.

In the end, China will win this trade war. At some point, that will become obvious—even to Trump.

How many billion dollars have been allocated to compensate soybean producers because of the trade war.

The president is understandably eager to make the case for his tariff strategy. Yet, objectively, the deal is at best a mini-deal. At worst, it’s a joke that pretty much fails to accomplish the goals Trump was trying to achieve. Most noticeably, it fails to get a commitment from the Chinese government to give up its protectionist and authoritarian grip on its economy. It’s also unclear as to whether the deal will succeed in forcing China to stop asking foreign companies to hand over trade secrets. And China will undoubtedly continue to use its state-owned enterprises to artificially direct resources toward—and subsidize—favored industries.

Worst of all, the deal would actually reinforce these Chinese behaviors. For instance, the deal in question would require that China use its state-owned enterprises to buy $40 billion to $50 billion worth of American agricultural products annually—instead of the roughly $20 billion it bought previously. That’s no victory. That’s a concession China already agreed to more than two years ago. And that’s pursuing the very sort of top-down, government-directed policy Trump claimed he wanted to change in the first place.

Unfortunately, thanks to a profound misunderstanding about the value of exports, the president may receive some praise for getting China to commit to buying more U.S. soybeans. While it may be very counter-intuitive to most people, economists understand that exports are valuable goods that we give up in exchange for imports; exports themselves are costs, rather than benefits.

I’m reasonably certain that if anyone tried to explain to Trump the reasons China is in a better position than the United States to tolerate the continuation of this trade war, he’d get bored and stop paying attention. As he wrote in “The Art of the Deal,” “My style of deal-making is quite simple and straightforward. I aim very high, and then I just keep pushing and pushing and pushing to get what I’m after.” Understanding the other side is not part of his calculation.

So when “pushing and pushing” fails, he learns nothing. We saw that in his multiple failed legislative initiatives, from the attempt to repeal the Affordable Care Act to the government shutdown of 2018-2019. Every time, he showed no evidence that he knew anything about the members of Congress whose votes he needed, nor cared what incentives and fears they faced. And every time he lost.
At some point, the same thing will happen with the trade war. The economic damage to the United States will become clearer, his reelection chances will get dimmer, and he’ll say to himself, “Who could have known the Chinese would be so patient and be better able to endure short-term pain than us?” The fact that pretty much everyone except for him knew it will not register.

(22298)
$179.00 (as of May 19, 2022 03:42 GMT -04:00 - More infoProduct prices and availability are accurate as of the date/time indicated and are subject to change. Any price and availability information displayed on [relevant Amazon Site(s), as applicable] at the time of purchase will apply to the purchase of this product.)