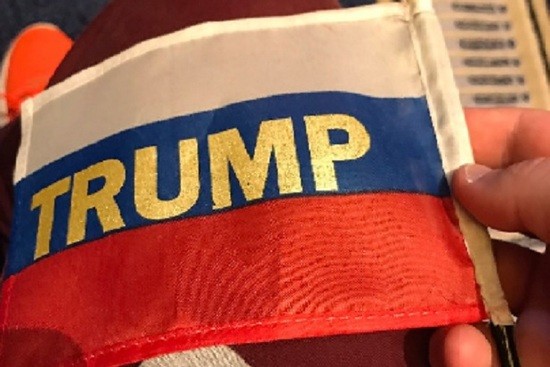 Dow is down 1,100+ points and Trump has thrown the COVID19 hot potato to Pence, so IMPOTUS can return to the banality of his existence, pimping reactionary cultural products. This time a dramatic reading of the Strzok/Page text messages.

As if we didn’t have enough of Trump mocking Lisa Page at his soon-to-be shrinking contagion rallies, RWNJs will have a new opportunity to contract community contagion at community theater until they can get it onto YouTube.

Then there’s its performance at CPAC, which as an unintended consequence, more than a few conservatives might actually read the Mueller Report.

FBI Lovebirds: UnderCovers is part of a genre called verbatim theater. As written by conservative filmmaker Phelim McAleer, it's a four-person play that relies on transcripts of the secret text.

What do you get when you take Dean Cain, an actor famous for playing Superman on TV, and Kristy Swanson, the actress who was the original Buffy the Vampire Slayer, and give them the chance to play a couple of adulterous, wildly partisan FBI agents working at the highest levels of the Mueller Russiagate probe?

You get an outrageous play that had its conservative audience of 500 people howling at its premiere last Thursday at Washington’s Ronald Reagan Center.

Liberal comics may have had the field to themselves so far when it comes to Trump’s Washington. But they will now have to make room for a worthy counterpoint.

FBI Lovebirds: UnderCovers is part of a genre called verbatim theater. As written by conservative filmmaker Phelim McAleer, it’s a four-person play that relies on transcripts of the secret text messages exchanged by lovers Peter Strzok and Lisa Page (the FBI agents) as well as their congressional testimony under oath.

In their private meeting, Cain and Swanson and McAleer and McElhinney discussed the importance of the play with President Trump – and its upcoming historic performance at the Conservative Political Action Conference (CPAC). FBI Lovebirds: UnderCovers is the first play to be staged at CPAC in its almost 50 year history.

[…]
They also discussed preventing Donald Trump from getting elected – suggesting that the Russia investigation was “an insurance policy” in the “unlikely” event he would win the 2016 election. When President Trump was elected they then secretly discussed impeachment and other ways to undermine his presidency. The play, which is 100 percent verbatim, consists of the text messages and their convoluted answers to an aggressive closed door congressional inquiry into their behavior.

Trump has a MAGA rally scheduled for Friday night in SC to mess with Dems logistics. Should unnecessary public gatherings really be held when youÃ¢Â€Â™re facing a Coronavirus Pandemic? @realDonaldTrump— NoelCaslerComedy (@CaslerNoel) February 27, 2020

(43163)
$0.00 (as of May 20, 2022 07:52 GMT -04:00 - More infoProduct prices and availability are accurate as of the date/time indicated and are subject to change. Any price and availability information displayed on [relevant Amazon Site(s), as applicable] at the time of purchase will apply to the purchase of this product.)